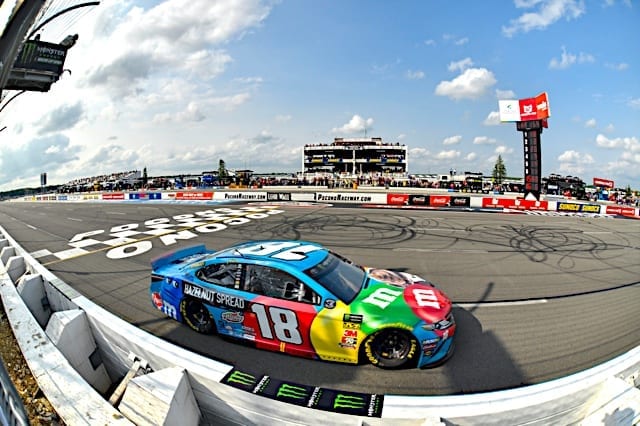 Pocono Raceway is a tough place for creating exciting racing. The current rules package rendered the race as a bit of an unknown. Those that watched last year’s Pocono Green 250 for the Xfinity Series got a taste of what they were in for.

Once again, the rulse package played a huge role in what viewers got to see on Sunday (June 2). The overall action was not particularly exciting for much of the race.

The restarts were fairly interesting. You got to see some fanning out, but not all that much. Drivers such as Kyle Larson and Martin Truex Jr. were more than willing to press their luck on fanning out, but everyone else really kept themselves in line.

Everything that has been written about the race indicates that it was extremely difficult to pass. That was the least of the problems Sunday. It was difficult for drivers to even get to each other in order to attempt to pass. The tall rear spoilers and aero ducts effectively eliminated the possibility of the draft working. You could sweep past someone that got stalled out, but once the field spread out, that was highly unlikely.

What dis that all mean for the broadcast? It meant that FOX Sports 1 didn’t exactly have a lot of great action to show. There were some side-by-side battles from time to time, but not too often.

Having said that, if there is a lead change under these circumstances, they would do well to acknowledge it. The booth failed to acknowledge Clint Bowyer snatching the lead away from Kyle Busch on lap 73 (this was on the restart right after Corey LaJoie’s crash) for two full laps. Yes, there was other stuff going on, but I don’t understand why they chose to ignore it. Just 25 seconds after acknowledging it, Busch swept back past on the outside in turn 3.

With a dearth of on-track action to show, FOX Sports 1 should have taken the opportunity to cover as many stories as possible. They don’t really do a good job of that under normal circumstances, and Sunday was not really any different. It just looks worse than normal since there was so little action. You have to give the viewers something to look at. Otherwise, it was just plain unexciting to watch.

I also noted a couple of positive changes during the broadcast. FOX now has full field rundowns during the side-by-side commercials and Crank It Up segments using the FOX Box. Sunday was the first time I really got a good look at the setup, and I actually like that better than the pylon. The previous FOX Box setup from 2017 was clunkier than they have now, and the current setup really works well.

Also, FOX Sports 1 introduced a new wrinkle for the scoring pylon that shows positions gained or lost. On Sunday, this was only used after the first lap following restarts. Given Sunday’s race, maybe this wasn’t the best use of the setup, but it is intriguing. That used to be done with a small box that highlighted a collection of drivers. Now, it covers the entire top 20. As a result, it is far more comprehensive.

I did notice some technical issues early on with the feed, which cut out a few times right before Austin Dillon had his wreck. Not sure what was going on there. In situations like that, I just assume that it was on my end, but if anyone else had those issues Sunday, by all means make note of it in the comments below.

Post-race coverage was decent in scope. Viewers got interviews with seven different drivers after the race, in addition to a check of the points and post-race analysis. Much of those interviews talked about the aforementioned difficulty in regards to passing.

Prior to the race, FOX Sports 1 aired an interesting one-on-one interview that Jamie Little conducted with Chip Ganassi in his Pittsburgh-area home. The piece started out with Ganassi simply stating, “I like winners.”  If you’re reading this, then you probably see him tweet that every now and then. Heck, he even has a hashtag for it.

For Ganassi, this is a simple mentality of life for him. He’s not a fan of the whole “everybody gets a trophy” thing.

For me, the most interesting part of the piece didn’t get a lot of time here. That was when the whole DC Solar mess came up. The DC Solar raid/bankruptcy seems to have affected Chip Ganassi Racing far more than anyone thought. Ganassi made reference to deferring contractual payments to his drivers in the interview, but did not elaborate. He says everything will be back to normal in a year or so. Perhaps Ross Chastain will get another chance with the team once they’re ready to return to the Xfinity Series.

Honestly, I would have liked for Little to go into a little more detail with Ganassi on the DC Solar issue. Perhaps he couldn’t really do that due to legal issues. Perhaps it got cut out. It struck me as interesting and I wanted to know more.

Finally, the Darrell Waltrip retirement tour is in full swing. Prior to the race, a piece aired where Waltrip drove his chrome golf cart around the track and talked about the memories that he’s had at the scalene triangle. For the most part, this piece concerned things that happened during his TV career. The exception seemingly was Davey Allison’s infamous crash from 1992.

Also, for some reason, he drew a blank while trying to reference Saturday winner Cole Custer right before the race. It’s like he outright forgot the man’s name and tried to call him Cole Trickle. I guess they’re about the same height. I know Waltrip hasn’t called a race in the Xfinity Series since 2006, but he would have done well to better familiarize himself with the up-and-coming future stars of the sport. It’s only proper.

That’s all for this week. Next weekend is the first split weekend of the season for NASCAR’s National Series. The Monster Energy NASCAR Cup and Xfinity Series will be at Michigan International Speedway with the ARCA Menards Series competing on Friday. Meanwhile, the Gander Outdoors Truck Series will be at Texas Motor Speedway for their second visit of the year, supporting the NTT IndyCar Series.

In addition, Formula 1 will be in Montreal for the Grand Prix of Canada. Finally, SRO America’s series will be at Sonoma Raceway in California for some action. The TC America series will rejoin the fray after sitting out the weekend at Canadian Tire Motorsports Park. TV listings are in the Television tab.

We will provide critiques of the Cup and Xfinity races from Michigan in next week’s edition of Couch Potato Tuesday here at Frontstretch.  The Critic’s Annex Thursday will cover Saturday’s Pocono Green 250.

As always, if you choose to contact a network by email, do so in a courteous manner. Network representatives are far more likely to respond to emails that ask questions politely rather than emails full of rants and vitriol.  And once again, don’t cuss out Mike Joy on Twitter, please.

I find the video problem you mention interesting… our internet was crappy all day Sunday, so I was happy the Indycar race was on NBC over the air, except they had a major video stream issue at one point and had to cut to commercial to resolve.

I hate the Fox box with the passion of white hot sun. The pylon is far easier to follow. Cars aren’t racing in columns. The are racing one after the other. The one thing I most want to see die is the Fox box.

Ever since this package was introduced this year I’ve been watching less and less of the races. Watched about 4 laps of Pocono then turned it off. It’s does not provide any type of actual good racing. All you get is ridiculously clustered restarts of drivers trying to make moves with no power to do so. And I’m really tired of everyone broadcasting trying to sell this package. It’s absolutely awful. Give back the horsepower, lower the rear spoiler down to 5 or 6 inches, and get rid of that damn splitter and go back to a valance.

When Fox concentrates on the front of the field, a lot of the drama that would keep a rather dull race interesting isn’t pointed out. Several teams had major ups and downs with no explanations at all. I just heard on TV Monday that Alex Bowman had trouble keeping his tranny in 4th gear for the last part of the race. Never heard a word. The obsessions with a few drivers (Kyle Bush whom DW can’t get enough of) robs viewers of a lot of the interest that doesn’t happen with only 10 drivers covered.

The media keeps trying to sell us on this “package,” and they must think we are stupid. It utterly stinks, regardless of track. Indycar reduced downforce and plans to reduce it further. Formula 1 went to much larger tires, which partially negates downforce, but still has too much downforce and does no actual racing. NASCAR alone is adding downforce, which eliminates racing altogether.

To much in car camera and M. Waltrips rhetoric about strategy. Week after week,same old thing.

The FOX broadcasters are just phoning it in every week now. They are not watching the live racing action, they glance at the monitor and make comments. The most irritable is when a driver makes a pass, then they look up at the monitor and say that car, who is pulling away, is being stalked by the car he just passed. They have certain sound bites or sequence sentences that they just phone in. I know that job isn’t easy for live TV, but there is enough going on in a forty car field to do accurate reporting. Also cut it down to 2 people with an occasional drop by guest. Three people are constantly trying to show each other up. Save some $.