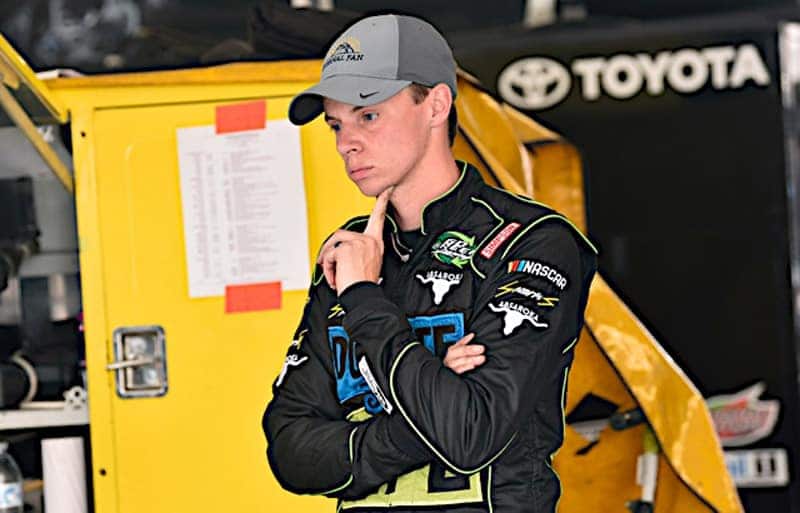 Chris Buescher was once again the number one dog in Sunday’s (June 2) Pocono 400 at Pocono Raceway. The No. 37 JTG Daugherty Racing Chevy crossed the stripe in the 14th position.

For the first time in his Monster Energy NASCAR Cup Series career, Buescher has finished in the top 15 in three consecutive races. The team has seen a significant increase in not only its finishes, but how well its cars are running over the course of the event. Instead of lucking into good results, the former Xfinity Series champion is actually performing at that level.

Buescher gained 10 positions from his 24th-place starting position. While he sits 22nd in points, nearly 60 behind the cutoff spot, it certainly isn’t an insurmountable deficit — not to mention a victory is within the realm of possibility, which would also ensure a second career playoff berth for the Texas native.

Behind Buescher, Matt DiBenedetto earned a 17th-place finish for his efforts at Pocono. It was the best career showing for DiBenedetto on the 2.5-mile, triangle-shaped track, a full 10 positions ahead of his previous best. This came after an early spin and battling overheating issues early on that cost him a lap in the pits.

The Front Row Motorsports Ford of Michael McDowell also had a decent day, claiming the final spot in the top 20. Pocono holds a special place for the FRM group, as the organization notched its second Cup win with Buescher in 2016 courtesy of a weather-related gamble. While there would be no trophy this time, the result continued the notable improvement that the team has made recently.

The Xfinity Series took to the Tricky Triangle on Saturday afternoon. Brandon Brown continued his strong run in 2019 with a 13th-place finish, tops among the underdog contingent. Brown has now seven top-15 finishes this year, and the 13th equals his career-best finish in just 32 Xfinity starts.

Ross Chastain had a stellar day, bringing his Johnny Davis-owned Chevrolet to the line in the 14th position, and Josh Williams earned an impressive 15th-place finish,

Drivers starting out young in the highest levels of NASCAR isn’t a new phenomenon. Jeff Gordon began the modern version of that trend, and after two-and-a-half decades, and it shows no sign of tapering off. So many of those drivers jump right into top equipment that it’s more unusual when a young driver has to do things the old fashioned way. Such is the scenario for Joey Gase.

Gase made his Xfinity Series debut in 2011 at the age of 18, driving for Archie St. Hilaire. For those of you who don’t know, St. Hilaire is the owner of the No. 32 Go Fas Racing team piloted by Corey LaJoie. Gase made five starts that season, finishing in the 20s all five times, which was rather remarkable considering the team’s limited resources and Gase’s inexperience at that level.

Gase started over 200 Xfinity races over the next several years, driving for both St. Hilaire and Jimmy Means. His best finish came at Talladega in 2015, where he earned a fifth-place finish. Additionally, Gase has over 30 starts at the Cup level, with a best of 18th with StarCom Racing, once again, at Talladega last October.

For 2019, Gase has joined forces with team owner Carl Long to run a full Xfinity schedule, along with a partial Cup effort. His best showing thus far is an 18th in the Xfinity season opener at Daytona, but Gase has been remarkably steady. He has seven finishes in the 20s this year and has been running at the conclusion in nine out of the 12 events. Look for more consistent finishes and continued improvement from Gase as the season progresses.

Just landed back at home. What a day we gave it all we had and came home p15 solid day for everyone @dgm_racing_ looking forward to next weekend keep bringing home these top 15 finishes that’s what we need?? thank you @MarioGosselin for believing in me and my ability. pic.twitter.com/HS8QTsoLrr

I have been called worse, on the bright side I got the spot back when it counted. ?

That was a ton of fun! Really cool to see the kids face light up for an autograph and a picture. Best thing about #NASCAR Thanks for sharing @Josh6williams https://t.co/wv5Ayh94dJ

Just to show how hard my team worked this weekend…had to change engines and miss final practice, we had to start in the back of the field 3 times in the race, made adjustments and they never gave up and we fought back to p17. No lack of effort from my guys! Proud of them pic.twitter.com/4HFBIOWLHA