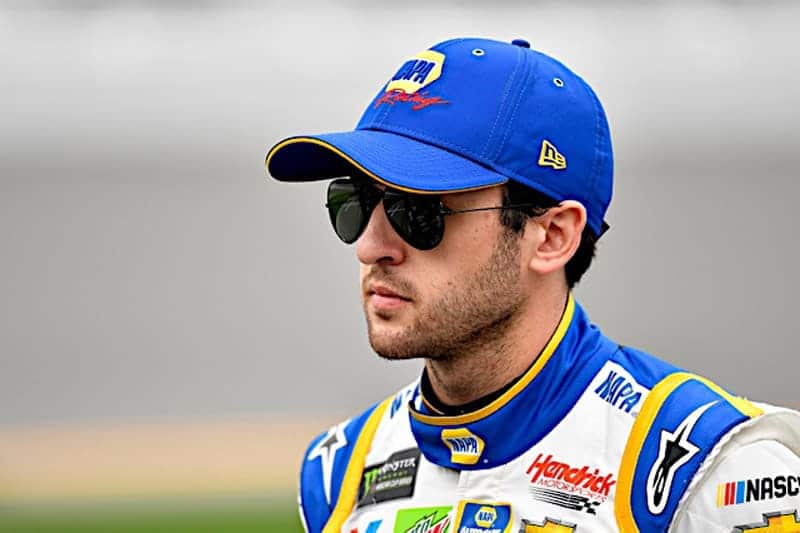 Pocono Raceway is not a thrilling race track. It’s not even an exciting one, and barely qualifies as interesting. So the results in the Monster Energy NASCAR Cup Series race weren’t all that surprising. Joe Gibbs Racing’s Kyle Busch won for the fourth time this season and the 55th time in his Cup career, holding off Team Penske’s Brad Keselowski after dominating the second half of the event. Busch is now tied with Rusty Wallace for ninth place on the all-time Cup wins list.

Cars couldn’t pass each other, which happens most of the time on flat race tracks, and Stewart-Haas Racing’s Kevin Harvick‘s chances of winning evaporated on pit road, which has become a familiar refrain over the past several years.

Chase Elliott is locked into the playoffs thanks to his Talladega win, and the sport’s Most Popular Driver has five straight top-five finishes, including three fourths in a row. For the season, Elliott has six top fives and seven top 10s to go along with two poles and two stage wins, with the lowest finish of 19th coming at Atlanta. The Hendrick Motorsports driver looks like Chevrolet’s top hope for a title.

Austin Dillon drove himself into the wall shortly after the competition caution and was rewarded with a last-place finish because of it. It was the second race in a row that the Richard Childress Racing driver has crashed out of, and his fifth result outside the top 20 through 14 races. Dillon is 21st in the standings, 57 points behind the final playoff position.

He hasn’t had the consistency most of his teammates have this season, but Erik Jones is still in a JGR Toyota, so Jones has four top fives and six top 10s, including finishes of sixth, third and third in the past four weeks. It was a good rebound after the last-place result in the Coke 600 due to a parts failure.

The good news for Ricky Stenhouse Jr. is that he has two top 10s this season, and his team recently signed with a familiar sponsor. The bad news is that the Roush Fenway Racing driver has five finishes of 25th or worse, including Sunday’s 32nd after crushing the wall. He’s faintly in contention for the final playoff spot at 20th in the standings, 34 points out of playoff position.

Joey Logano has a win at Las Vegas, a pole at Martinsville, seven top fives, 10 top 10s and five stage wins so far in 2019. He has the most stage points, and has recorded six finishes of seventh or better since Bristol. The reigning champion is probably not finished winning, either, given the way Team Penske has performed this season.

It was another weekend to forget for Front Row Motorsports. Matt Tifft‘s race ended with a transmission failure on the No. 36, relegating him to a 33rd-place result. David Ragan‘s No. 38 was plagued by tire woes all day long (he finished 30th), and Michael McDowell‘s No. 34 endured front end damage on the way to a 20th-place finish. They’re all consistent; the trouble is that consistency has taken a leap backward in the performance department. Tifft is 31st in the standings, least among full-time drivers competing for Cup points, McDowell is 30th, and Ragan is 27th.

Knaus makes the strategy call for @WilliamByron to come to pit road for fuel only#HendrickAutoguard24 pic.twitter.com/3h4uXjL54x

There weren’t that many good schemes to choose from, since Busch’s Hazelnut M&M’s car won, which invalidates it from consideration as a Paint Scheme of the Week. So with that said, it goes to William Byron this week, which was a very plain, essentially self-sponsored, blue car with the highlighter yellow numbers. Any other color of number on a Hendrick car just looks wrong.

Also, don’t look now, but the second-year driver has two poles and three top 10s in the past four races.

.@BayleyCurrey picked up a career-best finish of 25th.

Wood Brothers Racing with the dust jacket summary of their day:

18th for the day. we snuggled on the last two restarts and unfortunately those two were the ones that mattered. had decent speed at the end, pit stops were good. just a sad face day. ☹️

All three national series are in action this weekend in two different locations.

The Gander Outdoors Truck Series is at Texas Motor Speedway for the start of the Triple Truck Challenge in the SpeedyCash.com 400  at 9 p.m. ET on Friday, June 7 on Fox Sports 1. Look for ThorSport Racing’s Ben Rhodes to triumph.

The Xfinity Series and MENCS are at Michigan International Speedway, with the NXS running the LTi Printing 250 on Saturday, June 8 at 1:30 p.m. ET.  It will also be shown on FS1. After coming a straightaway short this weekend, Tyler Reddick should get back into victory lane.

The Cup Series’ FireKeepers Casino 400 is Sunday, June 9 at 2 p.m. ET, and it, too, will be shown on FS1. A Stewart-Haas Racing driver will temporarily break the Penske-JGR stranglehold on trophies.