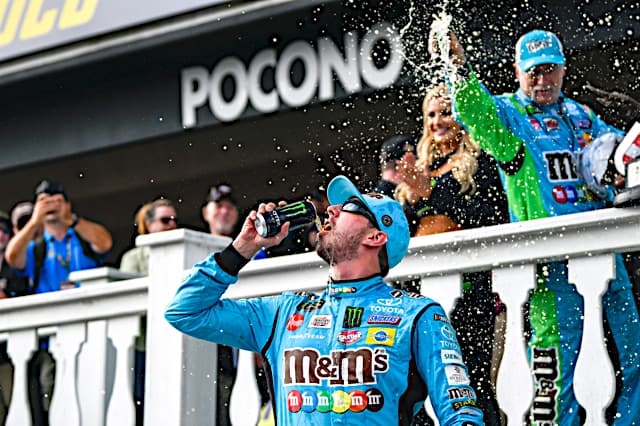 ONE: What Pocono Proves

If Memorial Day weekend is the start of the summer, one of the first things that happens when the season arrives each year is the annual hand-wringing over Pocono Raceway. Never the poster child for nonstop thrills, it seems the Tricky Triangle is always the source of debate: Should it really have two races? Could they try turning one of them into a road course race a la Charlotte? Is it even possible to manufacture side by side racing in Long Pond?

That rhetoric was always going to ratchet up for the Pocono 400 because of the 2019 rules package, and it felt like fans and drivers alike were viewing the race with an even more critical eye than usual. The results were … not good, to put it mildly, with Denny Hamlin calling passing “impossible” and more than three-quarters of the nearly 12,000 people who voted in Jeff Gluck’s weekly Twitter poll panning the on-track action.

While that debate is understandable — and could still intensify even more in 2020 when Pocono hosts a Cup Series doubleheader — it shouldn’t overshadow what the race did well, which is to draw even more solid outlines around the key themes of the first part of the Cup Series season.

Joe Gibbs Racing has its act together, with Kyle Busch winning his fourth race of 2019 and ninth for the organization as a whole in just 14 events. Chase Elliott might be the only hope Chevrolet has at a title contender, even as his Hendrick Motorsports teammates show some more speed in qualifying and for spurts during races. Stewart-Haas Racing is still MIA from victory lane and doesn’t look particularly close to changing that.

In short, the June Pocono race was a microcosm of the season to date. Measuring stick isn’t a descriptor usually attached to the Long Pond layout, but at least for now, it fits.

TWO: A Better Mark for Busch

Earlier this season, there was a lot of (mostly TV-generated) hype as Kyle Busch chased his 200th victory across NASCAR’s three national series. While an enormous accomplishment, Rowdy’s pursuit of 200 was breathlessly held up against Richard Petty’s 200 victories in a way that left everyone irritable. Old school NASCAR fans and Busch’s many detractors were upset because it wasn’t an apples to apples comparison and felt it was disrespectful to the King, while Rowdy Nation believed their driver wasn’t getting his just due because people were turning their nose up at his Xfinity and Truck wins.

But Sunday’s Pocono 400 gave Busch 55 top series victories, enough to move him into a ninth-place tie on the all-time list with Rusty Wallace. That’s arguably a more concise way to place him above most of his contemporaries and a fairer way to judge him, as much as it’s possible, against the sport’s greats. It’s worth noting that the next name awaiting him on the career wins list is Dale Earnhardt, and passing the Intimidator would truly put his talent in perspective.

What Busch could use as he continues making his case for legendary status is more championships, though he has to be considered the favorite for the 2019 crown at the moment. There will be time to appreciate his handiwork across multiple series once he’s retired, but for now, Rowdy will untie himself from Wallace with his next win, which could come as soon as next weekend. Whether you root for Busch or against him, you have to admit that’s impressive.

Each week feels like the one when Kyle Larson will break free of the funk he’s been in. Pocono was no exception, with Larson wheeling his No. 42 Chevrolet to a pair of stage wins. He was never going to win the race given how difficult it would have been to pass Busch, but barring some late misfortune, he was a shoe-in for a top 10, if not a top five. Incredibly, it would have been just Larson’s second top-five result of 2019 through 14 starts.

History will show that Larson finished a lap down in 26th place after getting into the wall late. How’d that happen? Larson said it was his fault for trying to be too aggressive.

Kyle Larson on what happened when he got into the wall: ⁦@NASCARONFOX⁩ pic.twitter.com/ozGKfxlSSe

What he didn’t say was why he might be feeling pressure to make moves that put his finishes in jeopardy. After a breakout 2017 campaign that featured four wins, Larson was expected to be a championship contender, maybe even the flag bearer for NASCAR’s crop of young talent.

Instead, his winless streak hit 60 races at Pocono, and he slipped back to 16th in points, in a dead heat with Jimmie Johnson for the final playoff position. It was thought that Larson’s unhappiness with the team might make him think hard about leaving Chip Ganassi Racing at season’s end, but now it’s fair to wonder if both sides might be starting to think, as Sheryl Crow once said, a change would do them good.

It’s only natural that these kinds of thoughts would be bouncing around inside Larson’s head too. Hard as it might be, his best course of action should be to just get what he can out of the car each week and not go for broke trying to force the issue. Otherwise, he could discover the pit of misery called the 2019 season hasn’t quite bottomed out just yet.

FOUR: Who will the next winner be?

After 14 races, there have been just six different winners in the Cup Series this season. That seems like a low number, but it’s worth remembering that it’s the exact same total as last year at this time, and there’s actually slightly more parity. The Big Three were the only multi-race winners through 14 starts in 2018, collecting 11 checkered flags, while four different drivers have at least two victories at the moment.

It was right about this time last June that talk started turning toward a challenge for the least number of different winners in the modern era, but that never really materialized. It took a few weeks after Pocono, but Erik Jones and Elliott found ways to finish first, and they were joined by four more drivers before Homestead.

The difference this time around is that its harder to see who the next first-time 2019 winner might be. Kevin Harvick is an obvious choice, but he seems to be bogged down by whatever is affecting all of SHR. Austin Dillon already had a victory by this time in 2018, something that appears less likely to reoccur with each passing week.

Jones and Ryan Blaney are driving for this season’s best teams, so they’re definitely candidates. Maybe Larson can get things straightened out, and Kurt Busch has been consistent. Alex Bowman has yet to win at the Cup Series level but he was close three straight weeks before Pocono.

All of this is to say there’s a wide range of possibilities, just none that stand head and shoulders above the rest. If no one can get it done by Daytona, it’s time to start pondering the dearth of different winners once again.

FIVE: The End of Iron Man

Maybe that should be Watermelon Man, given that we’re talking about Ross Chastain, who managed to start every NASCAR national series race this year between Daytona and Pocono. That streak will end this weekend, with the Truck Series in Texas while the Cup and Xfinity cars are in Michigan, the first time there’s a split-venue situation in 2019.

Perhaps in acknowledgement of that fact, Chastain isn’t even entered in the Cup Series race this time out, which will allow him to concentrate on the Xfinity Series event, the only one where he’s running for points. It was a fun run while it lasted: 34 starts, 10 top-five finishes (including at least one in each series) and his first ever Truck Series triumph at Kansas. A big chunk of it was done for underfunded teams, but you’d never know that from the nearly perpetual smile Chastain has sported throughout.

It’s interesting to consider who else might attempt a feat like this if they were allowed to do so. Cup Series drivers can’t because of restrictions on how many starts they can make in the lower series, so it takes someone in Chastain’s position to give it a go. If seat time, even in lesser equipment, really is essential to development, no one has been racking it up as fast as he has over the last four months.

So it will be weird for the trucks to fire up the engines on Friday night without Chastain on the starting grid. Here’s to you, man, and hope to see you back pulling triple duty before too long.

well, this aged well with Chastain going to the 45 full-time…..

Championships are now a one race crapshoot. Harder to rack up numbers, and if it’s your day your a one race champion for a day. How many other drivers in nascar history have over 200 victories across all three series ! Busch just turned 34, ten years younger than Harvick and with 10 more Cup wins. Not too shabby at all.