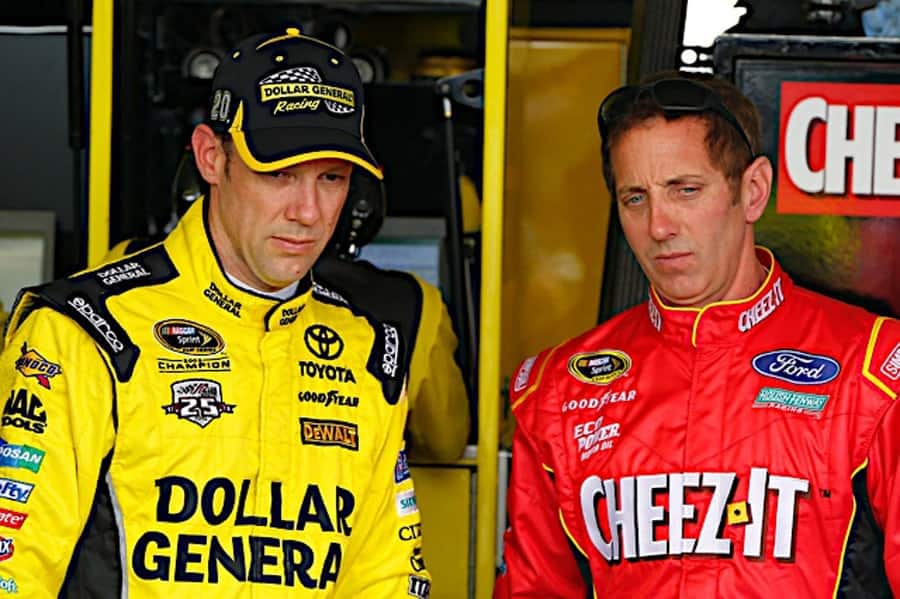 Biffle, who retired from full-time racing at the end of the 2016 season, hasn’t been in a NASCAR race since.

This raises the question: Should retired drivers try to make a comeback? Do fans want to see it? Is it worth it? Adam Cheek and Clayton Caldwell debate.

Who says nostalgia is a bad thing?

Drivers returning to racing after a hiatus — or in Biffle’s case, unretirement/one-off — is a novelty in racing, and I love it.

We’ve seen a number of drivers do this over the years. Recently, Dale Earnhardt Jr., who retired at the end of the 2017 season, returned for the fall Richmond Raceway race in the NASCAR Xfinity Series and nearly won. He will be back again later this year at Darlington Raceway.

Elliott Sadler is also on tap for a second comeback race this year. After retiring from full-time racing after 2018, he’s returned for two races in Kaulig Racing’s No. 10 — he piloted the car at Richmond in April and will drive at Las Vegas Motor Speedway in the fall.

Sadler told me that the two races were a split decision — he chose Richmond, while his sponsor picked Vegas.

And that’s one of the coolest things about some of these returns — Sadler is a Virginia native, like myself, and I saw local fans’ reactions, and they were thrilled to see him come back for a home-state race.

It was great to see Jeff Gordon unretire for a slew of races, too. Granted, he was subbing for an injured Earnhardt in 2016, but that still falls into the comeback category.

Mark Martin, it seemed, would never fully retire. He came back for races with Stewart-Haas Racing and Joe Gibbs Racing as a “super sub,” in a sense, filling in after injuries to Denny Hamlin and Tony Stewart.

Jamie McMurray, who technically retired at the end of 2018, returned to Chip Ganassi Racing for the 2019 Clash and Daytona 500.

Another example — Terry Labonte. Labonte drove his final race in 2014 for Go Green Racing, driving a scheme that paid tribute to several of his career’s iconic schemes. Similar to Martin, he never fully retired, driving races here and there and then entering three races in 2014 before his swan song at Talladega Superspeedway.

It’s certainly not a bad thing. It’s nice to see these drivers still wanting to race and do the thing they love, as well as seeing teams that are still willing to give them rides.

Biffle’s no different than many of these drivers — granted, his shadow among the sport’s icons isn’t as big as, say, Earnhardt Jr. or Gordon. But he did win championships in Xfinity and Truck and remained in Cup for more than 14 years.

Should Biffle have attempted a comeback? Maybe. Maybe not. But I don’t think that should be the focal point of his appearance in the Truck Series race Friday.

Let’s appreciate having the opportunity to see these drivers in action, whether in person or on TV, while we can. -Adam Cheek

Coming Out of Retirement Never Works

I am rooting for Greg Biffle, but, honestly, I don’t understand why he’s doing it. Personally, I think he should stay retired.

I am trying to think of a time when someone came out of retirement and had decent success. It never works and all it does it prolong other drivers from coming up and learning how to race.

One example of a driver coming out of retirement is “Chargin’” Charlie Glotzbach, who was a big-time driver in the 1960s and 1970s with a near victory in the 1970 Daytona 500. He stepped away from NASCAR after the 1970s, running only one race from 1977-1989. He attempted to qualify for one race in both 1988 and 1989 before running 10 races in 1991 and 1992 combined. In 1992, he ran seven races for Junie Donlavey’s No. 90 Ford. He was 54 years old and finished 16th at Michigan International Speedway as his best finish in those seven races. Other than that, Glotzbach never came close to the success he had early in his career.

Geoff Bodine is another example of a successful driver who took a few years off and came back to race. He was an 18-time winner in the Cup Series and temporarily retired after the 2005 season. We wouldn’t see Bodine back until 2009 when he decided to run for Tommy Baldwin Racing. Bodine never found success in his return either and missed a ton of races and never finished better than 30th in his comeback. He re-retired after the 2011 season. These are just two of countless examples of drivers doing the same thing Biffle is doing.

Now, Biffle’s situation is a little different because he’s not coming back to the Cup Series, but he’s still been out a long time. Aside from a testing session at Texas earlier this year, it’s been since Homestead-Miami Speedway in 2016 that Biffle has run a major stock car race, and he hasn’t run a Truck race in over 15 seasons. He’s got a great reputation as a solid race car driver and is flirting with disaster to ruin his reputation.

He hasn’t been out as long as Bodine and Glotzbach were and he’s not as old as they were when they attempted their comeback. However, he’s still been out quite a while. Do you believe Biffle has never run a race that has included stages? It’s a different mentality for stage racing, and the Truck Series is an entirely different style to begin with. Will he be able to find that same success? I doubt it.

Plus, Toyota puts a ton of money into its development program. There are plenty of young drivers in their program that could benefit from the experience they could have learned at Texas. Instead, Biffle’s comeback has prevented it.

In the end, I don’t think comeback tours work. They never have, especially when the driver has been away for over a season. I also think that the future young stars of this sport could have benefited from running at Texas, and it’s a shame they didn’t get a chance to do it.  –Clayton Caldwell

Biffle and Sadler didn’t retire, their teams retired them lol

This kid sho’s so sure Biffle should stay gone will probably be pooping his pants with joy when Joonyer triumphantly returns at Darlington.

I think it’s cool but it’s just an opportunity to run some laps for the driver. They really don’t have much of a chance of winning. So it really is kind of a gimmick. My main fear is that they come back, wreck, and get hurt (or worse). Tempting fate is never a good idea.

It’s a dumb headline. Anyone who wants to race and can get a seat should do so.

You have to give these guys a chance to race, because if you don’t that will leave the question of whether they can win or not, they have to at least try, sort of like not giving past champions a provisional spot in the sport

Unlike the drivers high lighted here Greg didn’t officially retired. He was never given a send off like the mentioned drivers and never ruled out returning. He said he would come back if there was a good opportunity. Kyle offered Greg Biffle a seat in his truck not the other way around.
Also the other mentioned drivers- Jeff and Dale weren’t squeezed out of their rides.
Jeff had no plans to drive again. He was asked to come out of retirement to replace an injured driver.
Dale Jr had only retired from cup racing.
Jamie McMurray was offered a job behind the scenes for Chip Ganassi and a final ride in the Daytona 500.

Clayton Caldwell must be eating crow for breakfast this morning