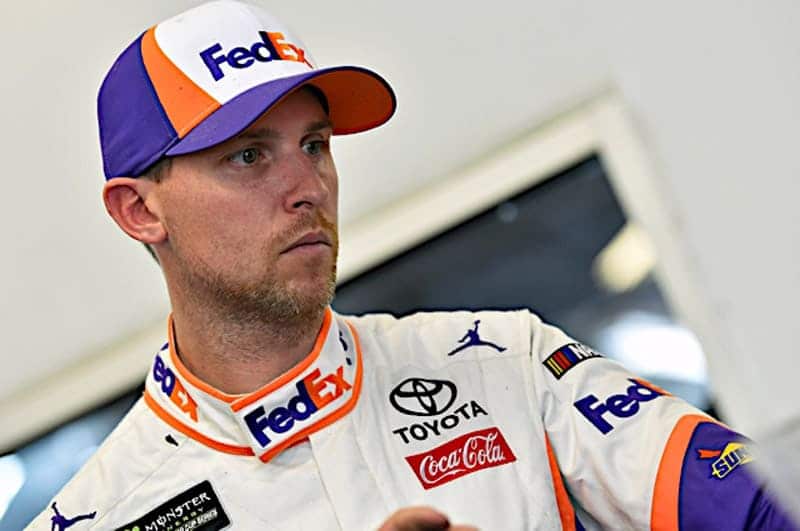 The 2019 NASCAR season started out with the highest of highs for Denny Hamlin when he scored his second Daytona 500 win. But since then, it’s been a bag of mixed results.

Those results haven’t been from a lack of performance, however, as Hamlin has led 118 circuits and picked up an additional win at Texas Motor Speedway in late March after two pit road penalties. In addition to the pair of victories the No. 11 team has, Joe Gibbs Racing has recorded six more between Kyle Busch and Martin Truex Jr. Through 14 races, the team has nine triumphs.

Even with the success of the Toyota powerhouse, Hamlin doesn’t feel added pressure going into the rest of the season.

“We’re happy with where we’re at, though we haven’t had good finishes,” Hamlin told Frontstretch last weekend at Pocono Raceway. “I look at Joey Logano, who is second in points. We’ve run better than him nearly every single week. He’s just done a great job of finishing better than they have been capable of.

“There are two things to look at it; you could be like man, we’ve got to get things going, we’re not fast enough. That’s not really a concern in our camp. It’s just how can we get through a nice, smooth weekend. It’s just getting some smooth weekends with no issues that’s going to lead to success for us.”

Smooth weekends indeed. Adding to the two victories, Hamlin had four additional top-five efforts in the opening nine races of the year. In those same races, he had just one finish outside the top 10 (11th at Atlanta Motor Speedway). Heading into Talladega Superspeedway, the No. 11 sat third in points.

Meanwhile, Hamlin was involved in an early accident at the superspeedway, triggering a 36th-place finish. The next week at Dover International Speedway, he blew a left rear tire, knocked the crush panel in and finished 21st. At Kansas Speedway, he wasn’t really a factor either, placing 16th.

But in the Coca-Cola 600 at Charlotte Motor Speedway, the No. 11 car was fast, leading 21 laps before wrecking on the final lap and finishing 17th. Those finishes, as well as the all-encompassing pit road penalties, have hindered Hamlin this season.

“A lot of it has been bad luck, but some of it has been self-inflicted,” Hamlin said of the races since Talladega. “I’ve gotten into the wall a couple times, which causes the tire to go flat and knock the crush panels out. I’ve had my fair share of it, but things like Charlotte and Talladega are out of my control. It’s just the tough part of the season where things can go wrong.”

This is all coming off Hamlin’s first season of not winning a single race throughout the duration of the 36-race schedule. Because of that, JGR moved Chris Gabehart to lead the No. 11 team, replacing Mike Wheeler.

“I feel like we’re steadily getting better with our communication and we’re starting to learn each other a little bit more,” Hamlin added. “I’m happy with where it’s at currently at this point, knowing that we’ve got roughly two-thirds of the season left and we’re going to be able to be better by the end of the year.”

If all else fails, Hamlin knows he has speed this season, something he was outspoken about in 2018, often noting Busch would outrun where the No. 18 car should have finished.

“We’re faster than we’ve been in a long time,” Hamlin stated. “I feel like every weekend we go and get on the race track we can win, and it’s been a while since I’ve felt that way.”

Combined, JGR and Team Penske have won all but one race this season. Between Hamlin, Busch and Truex, the three Toyotas have a 64.2 win percentage, which is remarkably high. The Virginia native believes if the team can win 40 percent of the races by the end of the season, that’s “a damn good year.”

Through 14 races, Hamlin sits sixth in the championship standings, with 11 playoff points.

Although I’m not a Hamlin fan, he will be heard from before the season is over.

Toyota is the reason I hate nascar….hope nascar dies soon