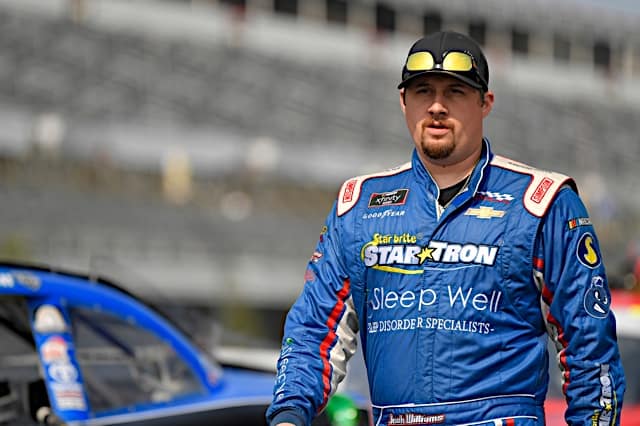 At the NASCAR Xfinity Series level, it’s rare to see drivers wear as many hats as Josh Williams does for DGM Racing. But he wouldn’t have it any other way.

Williams, 25, is in the midst of running his second season in NASCAR, primarily in Xfinity. Through the opening 12 races, the Florida native sits 18th in the championship standings with a trio of top-15 finishes, including a career-best eighth at Talladega Superspeedway in late April.

“I think we’re doing very good for what we have and circumstances that we’ve been in,” Williams told Frontstretch of 2019. “I’m really trying to focus the year on finishing inside the top 20 in points, both owners and drivers. I feel like that’s a good goal for us, and I think we can achieve it. If we have some good luck and some good finishes, we might even end up inside the top 15.”

However, Williams doesn’t just pilot the No. 36 Chevrolet. Because DGM Racing is a small, lightly-funded race team, it doesn’t have the manpower that JR Motorsports, Joe Gibbs Racing, Stewart-Haas Racing or even Kaulig Racing have. In fact, it’s quite a bit less.

Each week Williams finds himself setting up the scales to start the weekend. Mechanically, one of the few things he’s never done on a race car is put together a NASCAR engine, but he’s sure he could.

This is where Williams feels in his comfort zone — getting his hands dirty, helping out the race team. It’s been that way his whole life. Hell, he was the crew chief at the road course races in 2018 for Andy Lally.

“My dad was like ‘Hey, if you want to race, you need to know how to work on it, put it together and know every aspect of it,’” Williams stated. “I’ve worked with a lot of people throughout my career that has done the same.

“We usually don’t have enough people here at the track. I think even if I was running the [No.] 24 [Monster Energy NASCAR] Cup Series car, I would still struggle not being there to help and stuff like that because that’s who I am and what I’ve done. I’ve always had to.”

The help doesn’t stop at the racetrack. Williams has formed a close, personal relationship with his team owner Mario Gosselin, who has a best finish of 15th in 43 Xfinity starts.

It may not be as exciting as going 190 miles per hour at Daytona International Speedway, but Williams is always a helping hand.

“I don’t know if you could call it fun stuff, but sometimes Mario will bring a car from Florida up to North Carolina and will need to get re-certified, get its chassis fixed or whatever,” he added. “I will run it around town and drop it off, pick it up, do things we need to do. If he’s got some pieces that need to be serviced, we’ll take care of it if we can get the chance or if it’s something he wants us to do.”

It’s normal for a lot of drivers in NASCAR to not know how to work on the actual race car. Kyle Larson has been outspoken about it in the past — he just gets in and wheels the thing.

Meanwhile, like Williams, some drivers do know how to turn a wrench, helping their team out. Williams believes the drivers that help their team(s) out are in the catbird seat.

“I think it’s an advantage, to be honest when you get in the right situation,” Williams said. “It’s easier for us to relate to the crew chief, car chief or whoever. You can bounce ideas off each other. Say you’re tight in the middle of the run and the crew chief wants to change the air pressure, but you’re like, ‘I think we need to be more consistent throughout the run. Let’s do track bar and wedge.’ It makes it easier to communicate instead of coming in and saying, ‘Hey, the car is tight,’ and that’s all you say.”

Last year, at Michigan International Speedway, Williams drove one of the team’s haulers to the racetrack. Because the driver has paid his dues, whether it be in the ARCA Menards Series or in NASCAR, it would be hard for him not to help a team out, should he get an opportunity with a powerhouse team.

“I don’t think they’d let me, they’d probably say, ‘Kid, get out of here,’” he said. “It’s just who I am. Everybody needs to put in an effort. I’m not a big fan of just getting out of your car, getting on a golf cart and going somewhere else. I guess at that level, that’s part of the program, but I guess I would have to get used to it.

“I think it would be hard at the beginning, but then you would get used to it and you wouldn’t want to go back to sweating all the time. You’d be spoiled. I would probably do some stuff.”

Moving forward in 2019, Williams has some big goals for DGM Racing. He’s proven that he can get the job done in superspeedway races, typically running toward the front. That’s why he’s got Daytona in July circled on his calendar.