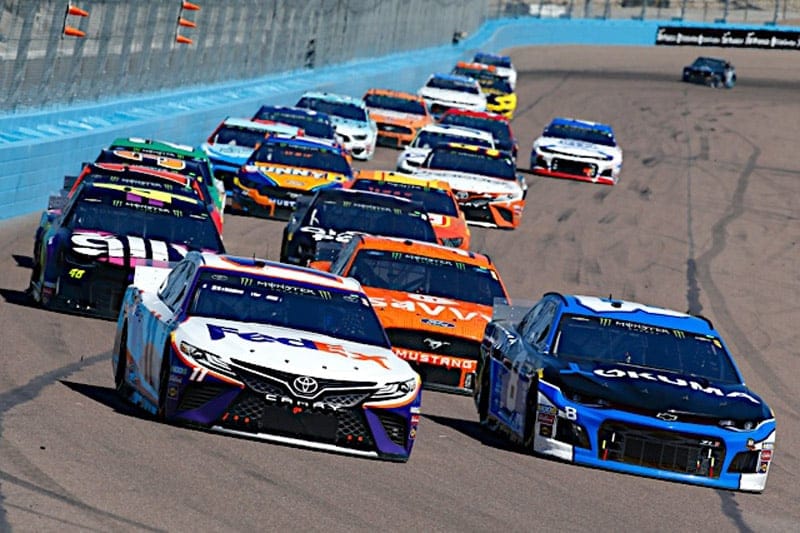 1. Raise them up off the ground… a lot

The hope here is that by forcing teams to make mechanical grip instead of relying on aerodynamic grip, that it would put races more in the drivers’ hands. The less the cars are sealed to the track, the more lift is created by the air underneath them. That is counteracted, to an extent, by the spoiler and ductwork, but all of that is one reason why racing with less aerodynamic cars was actually more compelling.

There’s a lot of talk about how competitive the field is these days, and that’s not incorrect. There are maybe 15 cars in the field every week capable of winning if the chips fall the right way, maybe more. But what’s behind it? Is it really that there are more elite drivers making this era so competitive, or are the cars just easier to drive, giving more drivers a chance? Either way, it’s not a bad thing, because it’s more compelling. But so little is in the hands of the people who should be driving the entire thing – the teams and drivers – and that’s what really needs to change.

2. Let teams actually work on them

Several years ago, in the name of cost cutting, NASCAR began mandating what gears teams ran and tightened the reins on suspensions as well. And the truth is, this does save teams money when they don’t have to buy (and pay multiple people to build and fine-tune) multiple springs, shocks and gear components for every track.

But it also takes away drastically from the competition. Not only does it eliminate a lot of the risk of failure that makes compelling storylines during races, but it makes the cars even more homogeneous than the aerodynamic and engine rules already do. Engines and bodies should have a degree of parity in that no manufacturer should have a distinct inherent advantage over another, but there should also be places for teams to gain an advantage, and this is where it can happen fairly, by giving all teams the ability to make their cars better than the next.

Parity isn’t about every car being equal during every race. It’s about giving teams equal footing and an equal chance to do something better than everyone else.

3. Bring back stock templates… sort of

The thing is, manufacturers aren’t likely to spend the time and money they once did designing street cars that would be fast on the racetrack. But the Cup cars should have the same basic lines as their stock counterparts, instead of the asymmetry that currently exists. Yes, making the cars symmetrical and straight makes them harder to drive on an oval. Again, this isn’t supposed to be easy.

Going back to matching the stock templates isn’t necessarily mandatory here. Making the cars symmetrical and allowing more autonomy with the front and rear of the car would make a difference. At the same time keeping the ride height slightly higher than some street cars would create a more appealing picture to fans and probably a better on-track product as well.

4. Make them heavier, with full power

Since the fifth-generation car came out, the Cup car has been lighter than the previous generations by a few hundred pounds, closer in weight to the Xfinity models. And the racing has suffered in that same time frame. The heavy, high-horsepower cars were perhaps (this is a theme here) harder to drive, but the weight, in conjunction with suspensions, tires, spoilers and gear choice, created better racing. Let’s bring that back into play.

The current Cup engine is too powerful to be safe without the tapered spacer, and there is something to be said about slightly lower power improving the racing. But the right way to go about that is to mandate a smaller engine without a spacer, and that includes the superspeedways. Run full power at every track, with a superspeedway engine that’s smaller than the one used at every other track. In this day and age of fewer engine suppliers and fewer teams building in-house, the cost of having separate speedway engines is absorbed in the team’s engine bills for the year and should not change drastically. The best racing came at a time when the cars were heavier and more powerful, so do that again.

5. Change the approach to tires

Putting races in teams’ and drivers’ hands is the theme here, so here’s another way to do that: Instead of bringing one tire to each track and each team running it all weekend, let’s have tire choice for teams.

At the road courses, the IndyCar approach would work. That means there are two tire compounds for teams: one that’s faster but wears quickly and one that’s slower but more durable, and teams have to run both for a minimum number of laps during the race. Strategy plays a bigger role than before.

At ovals, there could still be two compounds with the same properties, but this time teams must select one after the first practice that they then must run the entire rest of the weekend. Is there some risk here in allowing a less-durable tire?  Yes, but teams don’t want to tear up cars, so they would learn to manage that risk as much as possible.

There are ways to make the racing better with the next generation of cars that don’t compromise the safety features the current cars feature.  It’s certainly within NASCAR’s best interest to put some of them into play.

Given how good the racing has been (mostly) this year I can’t agree with any of this. Anything that increases costs to teams is not a good thing and most of these suggestions will do exactly that. Nascar is finally doing something right, why not just let it play out and do a post mortem after the season? So far, this is the best racing in we’ve seen in a long time.

The racing has awful this year save for 3 races: Talladega, Kansas, and Charlotte. Dega was because the drivers were given more horsepower than they’ve had at super speedways in 30 years. Kansas and Charlotte were night races aided by late race restarts. Otherwise, this Amy is right: this package is awful. The cars are so glued to the ground, and the dirty air behind them is so bad, they simply are unable to pass after the first 2-3 laps following a restart. Martinsville, Texas, Richmond, Dover, Pocano: these were all parades. Just follow the leader. Anyone who thinks this package has produced good racing has only seen highlights of restarts from Kansas/Charlotte. If that is all this package is good for, it needs to be scrapped. Core NASCAR fans never wanted to see plate racing become the standard. We want to see difficult-to-drive cars being wheeled by the world’s best stock car drivers at breakneck speeds.

I think Amy has gotten it almost exactly right. I can find very little with which to disagree. Indycar has reduced downforce and the racing has improved a lot.

Restrictor plates (or tapered spacers) are ridiculous. Speeds are not too high due to engines, they are too high due to downforce because drivers do not have to lift in the corners. If drivers have to lift in the corners, then they enter the straight at a lower speed, accelerate as long as they dare, and then have to slow down to enter the next turn. Lower speeds in the turns, if sufficiently lower, limits speed on the straight regardless of horsepower.

Fairness has been redefined, in racing as in society today. It no longer means equality of opportunity, it now means eqaulity in outcomes. It is no longer the goal that everyone has an equal chance, it is the goal that everyone be the same. Innovation and creativity, doing something that your fellow citizens are not willing or able to do, is now viewed as evil, especially if it leads to winning.

As to tires, the lack of wear is due to the downforce. Tires must be as hard as bricks in order to withstand the loads that are imposed on them, and have so little grip that they cannot lose grip as the wear because they had almost none to start with. That’s why all the use of “traction compound” and such nonsense, because the cars are driving on bricks, held to the track only by excessive aerodynamic downforce. Reducing downforce would allow the creation of tires with inherently better grip and a better pattern of losing that grip over time.

As for the comment by Sol Shine, I agree with Jack Miller, the racing with this “car” absolutly stinks like dead fish lying in the sun for a week.

The aerodynamic space race in NASCAR is horrendous. Proof the car matters more than the driver? Let’s look at Stewart Haas racing, shall we? Aric Almirola. What did he do before joining SHR? Not much. First year in, won a race and made playoffs. How about Clint Bowyer? Same deal, especially when you contrast his “layover” year with (I forget the small team he drove for) and his first year with SHR. What is the difference? The big teams have more money for aerodynamic engineers and wind tunnel testing.

Funny, when was the last time you heard about a new legendary engine builder in NASCAR whose engines were coveted because they were whipping the field with raw power? Outside of that CID infraction of, what, .0001″ to that low budget team a few years ago, when was the last time NASCAR stepped in to “level the playing field” due to an engine builder being too good? Now then, how many rules pertaining to aerodynamic advantages have been passed, manipulated, enforced in recent memory? I lost count…

And the “racing” sucks. It’s not a race, it’s a 4 hour pit-stop competition. Whoever gets their 4 wheeled space shuttle out first wins.

Overall I think Amy has a good plan to start with here.

There seems to be some consensus on this.
1. The current state of Cup racing sucks
2. Amy makes a lot of good points

Why does NASCAR persist in making decisions that ruin the sport?

Just eliminate all the aero aids and let the racers race.

Amy you should be running Nascar. Every idea you have is right on. Saw an interview a few years ago with Richard Petty. He said get the cars off the ground. Make them harder to drive. I realize that cost are a big part of Nascar. But Nascar has turn the cars into IROC cars. And we all know what happened to IROC. There needs to be innovation to keep things fresh.

The tire suggestion is off-base. To me, the tire compound used should be the same for every racetrack–one tire fof everyone and for all the racetracks. Let the teams figure out how to use them to their advantage.