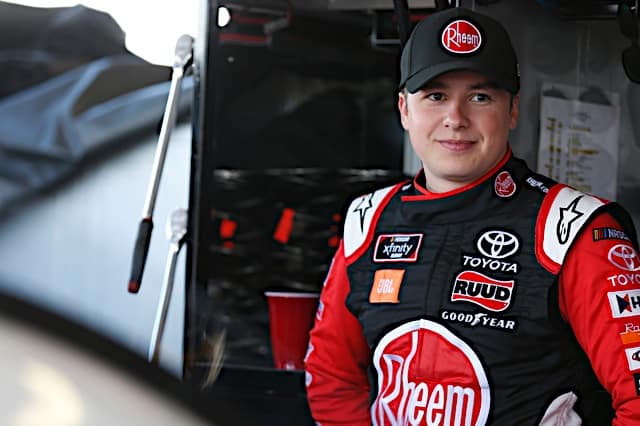 .@StewartHaasRcng is shaping up to have another busy summer, as it has multiple drivers with contracts that end after '19 including @ClintBowyer and @Daniel_SuarezG.

➖@SmithfieldFoods' deal also up for renewal, though it's unclear whether @Aric_Almirola's is timed concurrently. pic.twitter.com/jdLqDdEO2u

The biggest winners to this news are Cole Custer and Christopher Bell. Custer, after years of experience in the NASCAR Xfinity Series, now potentially has a road to the Monster Energy NASCAR Cup Series.

Meanwhile, Bell’s contract with Joe Gibbs Racing/Toyota Racing Development is reportedly up at the end of this year.

If Bell had no options, he was probably about to spend yet another year in NXS competition for JGR, as Toyota has no space in Cup. Tony Stewart constantly praises Bell in public, to the point of jokingly fawning over him (“I mean, look at him: He’s cute, he’s got nice hair – and the kid can flat-out wheel a racecar”), and Bell has driven for Stewart before in World of Outlaws competition. So suffice to say, if there is an opening at Stewart-Haas Racing, Bell is going to be at the top of a shortlist of candidates for Stewart.

And if nothing else, Bell being able to tell Toyota, “I’m not going to spend another year in NXS, I’m ready for Cup and I’m going to the No. 14 Ford if you won’t have me” is going to more than likely make the car manufacturer find room in the Monster Energy NASCAR Cup Series. Because it would be dumb at this point to let Bell go after spending so many years developing him, especially given the obvious skill Bell possess.

Daniel Suarez isn’t in danger of losing his ride at SHR; it’s year one and he’s improved from last season. Of course, everything changes if ARRIS decides to pull its sponsorship, but even then it’s already dramatically cut back since leaving JGR. Bowyer, however, is another story.

The 40-year-old has improved his average finish from last year and has been fairly successful in his tenure at SHR since a disappointing first year in 2017. But Bowyer doesn’t bring sponsorship to the table, with the car relying on existing team sponsors such as Rush Truck Centers and Mobil 1 to stay afloat. He also hasn’t been that successful to where this isn’t an issue, finishing outside of the top 10 in points the past two years and being 11th so far this season. So of everybody at SHR right now, Bowyer would be the most vulnerable if Stewart wants to make a run for Bell.

As far as Smithfield goes, I can’t see any scenario where it leaves Aric Almirola. And if it  were to leave SHR, Almirola would probably follow as well.

Will NASCAR and IndyCar end up working together more often?

Over the past couple of weeks, there has been discussion about more NASCAR/IndyCar team-up weekends, similar to this weekend’s NASCAR Gander Outdoors Truck Series race being a support race for IndyCar at Texas Motor Speedway.

NASCAR and IndyCar teaming up together more often would be a boon for both. Both would be able to attract new fans to their product, and IndyCar would have some much-needed publicity for its non-Indianapolis Motor Speedway events on the calendar. Especially if, at some point, the Cup Series gets involved in the action.

There are two main problems for such a weekend to occur: scheduling and ego.

IndyCar currently visits six NASCAR racetracks, only three of which hold Cup events. And of those three, Pocono Speedway would be impossible to run if NASCAR continues beyond 2020 with the doubleheader concept.

Indianapolis could work… if NASCAR was willing to move its Cup event to the road course. And who even knows if stock cars could be exciting on a course designed for Formula 1 cars.

IndyCar has hinted at going back to Richmond Raceway recently. But there is absolutely no chance of that happening, and the reason why is simple: the new garage at Richmond can only hold Cup cars. When I went in September, I noticed on Friday that all of the Xfiniry Series teams were working out on pit road all day. This is because the garages only have room for one series per weekend, and I don’t think IndyCar would be too happy with a similar arrangement.

So that just leaves Texas. Which, by all accounts (Eddie Gossage and otherwise), has the facilities for such a weekend. But then ego comes into play. Who races on Sunday? Which series will be relegated to the support race status?

There’s an extremely simple solution to this. Just have the NASCAR support race on Saturday afternoon and follow it up with the IndyCar race that night, like how it is now. Then the Cup race the next day. It’s such an easy concept to grasp. Huleman and Co. CEO Mark Miles has indicated it might be a “longshot”, but with NASCAR being more open to changing its schedule around and with not having much to gain from a partnership, the ball is in IndyCar’s court to begin talks.

What is the racing at Michigan International Speedway going to resemble?

The racing at Michigan this week is going to be a great unknown.

There’s evidence to suggest that the Cup race will look like a more narrow Daytona/Talladega, with cars going three or four wide on the straights of the 2-mile oval. And yet, the last time NASCAR experimented with a high downforce/drag rules package at Michigan was a horrendous race, with Matt Kenseth leading 146 of 200 laps en route to victory.

Denny Hamlin, the esteemed scholar who doesn’t understand how time zones work, thinks the racing this weekend is going to be great, unlike last week’s downer at Pocono.

Denny Hamlin on why a driver had to have realistic expectations today with this aero package and why he thinks Michigan could be a great race with this package. #nascar @NASCARONFOX pic.twitter.com/ucjgCDfnCI

As far as who wins it all, it’s going to be interesting. Brad Keselowski desperately wants to get a win at his home track, and he’s been strong there for a while now. The 2012 Cup champion has eight top-10 finishes in his last eight starts there, including a runner-up finish in the second race last year. This is also a strong track for Kevin Harvick; Harvick won the second race last year and finished second in the first.

After a slow start to the season, Kyle Busch Motorsports has decided to swap crew chiefs around to try to improve the performance of Todd Gilliland.

In KBM equipment, Gilliland and Harrison Burton are eighth and ninth in truck points, respectively. Now is about the time to note that there are only 14 full-time Truck Series drivers this year, and if Ross Chastain hadn’t waited until this week to declare for points in the series, they’d be well behind the Floridian in points.

Burton will get a free pass this year — this is his rookie season still, after all — but the seat might be starting to get hot for Gilliland. Toyota has a number of talents it is developing in the lower series that are going to need to move up at some point. If Gilliland can’t perform soon, he may well already be on his way out of KBM following this season in favor of a driver like Derek Kraus or Hailie Deegan.

What’s more is that Busch himself won all five of his races this year with the team, and he’s actually publicly taken a shot or two at his own team. So you can only imagine how those KBM team meetings have been going every Monday behind closed doors, if Busch will say things like that to reporters.

Bowyer is 40 and has 2 cup victories in the last 7 years plus he isn’t fully sponsor funded. Tony is not a business fool, if he has a chance to get Bell and full sponsorship he’s going to go for it. Gibbs and Toyota will be the fools if they don’t make room for Bell.
Some Cup team needs to grab Tyler Reddick, that boy is a wheelman and has a fire burning in him. RCR has a good one in Hemric, but would have to add another car for Tyler. Bet Hendrick has his eye on that boy for sure. I’m a j j fan, but he’s donr, can’t drive these lighter cars.

As far as Stewart-Haas is concerned, they’re obviously not operating at the same performance levels of recent years. While they’re still a top-notch team, I just wonder if not having the feedback from Kurt Busch is affecting their program? It seems Harvick is competent in evaluating the cars performance but I do wonder if Bowyer, Suarez, and Almirola offer the same level in-the-seat feedback Kurt Busch does?

I agree with you on that the feedback makes since !

i thought bell was tied to gibbs. i figured he’d go into the 11 cause hamlin has made noise he doesn’t care, he’s got a contract and he’ll sit and watch races or play golf if they offer him release.

I’m gonna go to the race some day though

Actually, I think it is in both series hands. I think you do it as a two year experiment. One year you have one series as the headline event. The following year the other series.

Initially I thought a Saturday night under the lights then a Sunday after noon race. However, logistically that is near impossible. You are asking your Public Servants and local volunteer’s to have minimal rest between the two events. We don’t want that.

Dang I would like to see Clint Boyer stay in the 14 but Christopher Bell is a hell of a driver ! If anything he should replace the 41 driver but I know his contract doesn’t run out yet .I’m a Johnson fan have been back since he drove the trucks on dirt.I have a gut feeling if anybody is gonna be close to breaking records with the best we have seen over the year Kyle Busch and Jimmie Johnson.Christopher Bell is gonna be the young little man to be reckon with he is confident behind the wheel no matter what he is driving.Stewart Hass racing don’t get rid of Boyer he is a class act all out great guy.

And if Kyle Busch wants to have success he should stick Bell in one of them trucks part time or full team to gain more experience and Bell race in the Monster series to but only run Monster points him and the Biff would work great together !