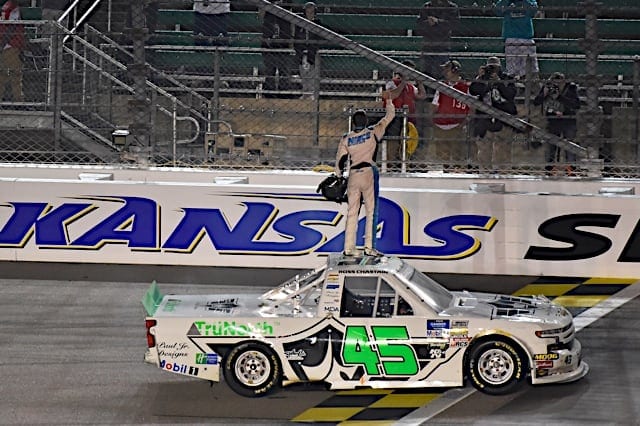 Here’s a fun one to explain: Ross Chastain‘s not running for NASCAR Xfinity Series points anymore. Instead, as of this weekend’s race at Texas Motor Speedway, he’s switching to title contention for the Gander Outdoors Truck Series.

Cool, right? I mean, it makes sense. He’s competed in all eight races in the Truck Series in 2019, scoring top 10s in all races, three top fives and a win at Kansas Speedway. He’d be dumb not to try to earn points in a series where he’s got a shot at the title.

Well, no. Nothing from Chastain’s past eight races in the series actually counts — not even that win, which would normally slot a driver into the playoffs near-automatically. Those well-documented 321 points he would have earned had he declared for Truck Series points pre-season? Still nonexistent.

And yet, as of this week, Chastain is a Truck regular. He’ll drive the No. 38 this weekend for Niece Motorsports, the team for which he’s competed in all races in 2019, generally in its No. 45. From there, he’ll reportedly drive for Niece the rest of the season, likely splitting time between its Nos. 44 and 45, which are full-time operations, and perhaps the part-time No. 38 (as of this writing, Kyle Benjamin is slated to drive the No. 45 in multiple events for the team, including at Texas, while Angela Ruch has multiple races remaining on her announced slate of races and Reid Wilson is in a similar boat, though the latter’s specific races and truck numbers are more up in the air).

Entering Texas, Chastain has zero points. As of now, 55 drivers who’ve declared for points in the series have competed in at least one race (Chastain makes 56, plus Benjamin, Ted Minor, Trey Hutchens, Greg Biffle and Tony Mrakovich, should they qualify at Texas). His goal? The playoffs, which kick off after eight more races. And to make it in, Chastain must at least make it into the top 20 of driver points and win a race. If he doesn’t win, he’d have to make his way into the top eight in the points. Again, in eight races.

Is this possible? Well, yes and no. The latter option — top eight in points without a win — is completely insurmountable. The former, however, is actually doable.

Start with the concept of a win. Before 2019, Chastain declaring for Truck Series points mid-regular season and choosing Niece as his team would’ve meant he was hoping for some sort of miracle. That’s not to say the two- or three-truck organization has never been a contender, but since team owner Al Niece brought the No. 45 into the Truck Series toward the end of 2016, moving into a full-time role in 2017, Niece had earned just three top 10s pre-2019, all of which occurred in 2018 (Justin Fontaine and Austin Wayne Self). Even Chastain himself, who drove three races for the team last year, didn’t finish better than 12th.

Clearly that’s changed (exhibit A: the Kansas win), and that’s thanks in part to a technical alliance with GMS Racing that’s really begun to bear fruit, plus a stronger full-time competitor in Chastain. The rise of Niece has been swift, but with Chastain holding the reins, it’s less surprising; after all, he’s a driver who’s overachieved in just about every piece of underfunded equipment he’s ever piloted, which made his triumphs with Chip Ganassi Racing in the Xfinity Series last year shocking only to those who didn’t follow the series regularly.

In 2019, Chastain has eight top 10s at a variety of tracks, from the half-mile Martinsville Speedway to the superspeedway at Daytona International Speedway, showing his prowess at more than just, say, the cookie-cutter types. As such, the likelihood of a win seems possible, especially with Kyle Busch out of the picture for the remainder of the season.

But then there’s the hurdle of getting to the top 20 in points, right?

Think of this one in two ways. First, there’s the amount of full-time competitors in the Truck Series. Despite fairly decent truck counts for much of the season thus far, Kansas excepted, just 14 drivers have competed in every race, with Chastain making 15. Gus Dean is the lowest on the totem pole at the moment, sitting 15th. The others in the top 20 range from Brennan Poole, whose On Point Motorsports team sat out Kansas, to Ruch and Jesse Little, who’ve each driven in five races.

So that’s the first thing to remember; it’s not like the Monster Energy NASCAR Cup Series, in which Chastain would be competing with nearly 30 drivers who are going for the series title. All of the drivers Chastain has to pass to get to the top 20 in points aren’t even at the track each week.

Then there’s the threshold to get to the top 20 himself. Luckily, Chastain was a dear and pulled this move eight races into the season and with eight races before the playoffs, making the math way easier. All right, so who’s in 20th? Little, who has 91 points to his credit in 2019; 19th-place Ruch has 92, and the 21st-place Josh Reaume (whose Reaume Brothers Racing competes in every race, even when he might not) possesses 89.

Chastain’s performance in the first eight races would have grabbed him 321 points, which would slot him second in points after eight races. But virtually everyone else is going to go up in points accrued over the next eight. Let’s assume everyone just about doubles what they have now. Points leader Grant Enfinger would be up to 662, while eighth-place Todd Gilliland would have 506. Little, meanwhile? 182.

Break that down by race. If a driver were to accrue 182 points in eight races, they’d be averaging 22.75 points a race, which equals out to an average finishing position of around 15th or 16th. Chastain’s average finish in 2019? 6.4.

So the math looks good. Really good, in fact. While it’d expose the lack of depth in the Truck Series as a result, at least there’d be a bright spot in seeing Chastain have a more stable chance at a championship vs. his Xfinity exploits, which last year involved a split between Ganassi and JD Motorsports with Gary Keller, the latter the type of team with whom one isn’t going to win a race.

Sure, there are potential caveats. Can lightning strike twice, after all, for Niece in victory lane, or will Chastain simply continue that sixth-ish-place average finish without breaking into victory lane, a place that’s eluded even the points leader entering Texas, Enfinger? And while many of the tracks on the schedule pre-Bristol Motor Speedway are similar (if not virtually the same) as those at which the series has already raced in 2019, there’s the wildcard of Eldora Speedway, where Chastain’s never competed in his 67-race Truck career.

But the possibility’s there; if it wasn’t, Chastain and co. wouldn’t have gone for it. And should he revisit victory lane before mid-August, the story of his 2019 season has the chance to become one of the greatest in the sport’s history.