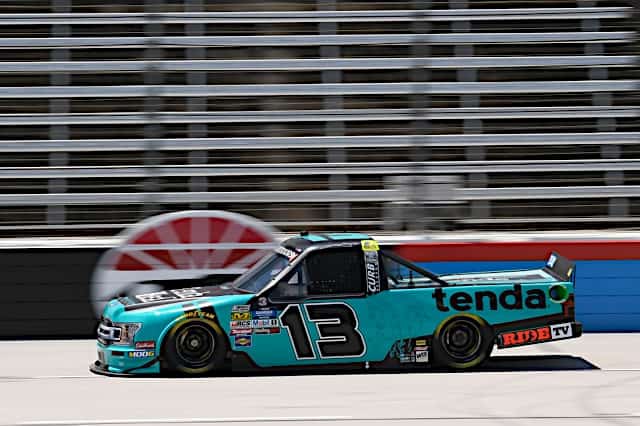 Going out late in the session, Jordan Anderson was sixth-quickest, followed by Matt Crafton. Austin Hill was eighth and Stewart Friesen ninth. Ross Chastain, who announced earlier this week that he will run for Truck Series points, rounded out the top 10.

Only 28 of the 33 entered trucks posted times during the first session. Norm Benning, Jennifer Jo Cobb, Ted Minor, Angela Ruch and Joe Nemechek did not turn a lap during first practice.

Meanwhile, just two drivers ran at least 10 consecutive laps. Kyle Benjamin, who is making his debut in the No. 45 Niece Motorsports Chevrolet, averaged 175.874 mph, while Tony Mrakovich, who is entered in NEMCO Motorsports’ No. 8 Chevrolet ran significantly slower and averaged 161.140 mph.

The second session was more of the same with ThorSport and GMS sweeping the top four speeds. Sauter led with a 184.168 mph lap, followed by Enfinger and Creed. Crafton and Kyle Busch Motorsports sophomore driver Todd Gilliland rounded out the top five.

Cory Roper ended the session sixth-quickest with a 181.984 mph lap. Moffitt and rookie Harrison Burton were seventh and eighth, respectively. Gus Dean and Tyler Ankrum rounded out the top 10.

This time, 32 drivers posted times with five of them running at least 10 consecutive laps. Rhodes, whose truck suffered minor damage in the first practice, was the only driver to sit out the second session while repairs continued. Sauter led that group, followed by Creed, Benjamin, Mrakovich and Ruch.

Just as the session was about to end, Friesen hit the wall hard, and the No. 52 team was forced to roll out the backup truck.

Once again, Sauter topped the leaderboards, this time with a 183.237 mph ahead of teammate Crafton. Hill ended the session third-quickest, followed by Tyler Dippel. Anthony Alfredo rounded out the top five.

Gilliland was sixth, just a small margin faster than Roper. Burton, Enfinger and Austin Wayne Self rounded out the top 10.

Greg Biffle, who’s making his first Truck Series start since 2004 was 11th, 12th and 16th in the three sessions. Friesen, whose team pulled out a backup truck following at crash at the end of the second practice, ran 23rd in the final practice.

Drivers will qualify for Friday night’s race at 5:35 p.m. ET Friday afternoon. That session will be streamed live at NASCAR.com. The SpeedyCash.com 400 will run at 9 p.m. ET with coverage on FOX Sports 1.