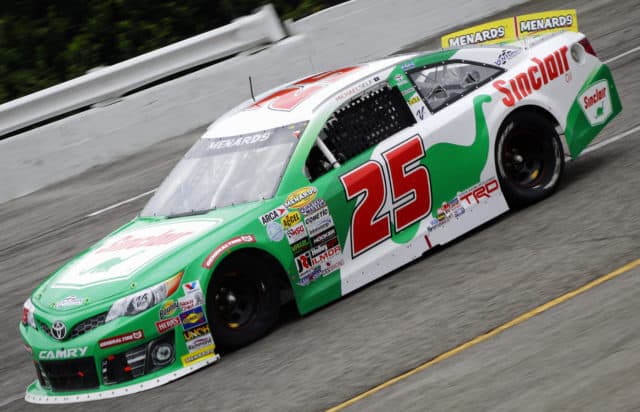 Michael Self had the best car in the VizCom 200 at Michigan International Speedway, but he nearly failed to win the ARCA Menards Series race. Ty Majeski elected not to make a late pit stop and almost saved enough fuel to win the race, but his No. 22 Ford ran out of fuel in Turn 4 on the final lap. Self drove around Majeski and he celebrated in Victory Lane.

In his post-race interview, Self complimented the performance by Majeski and his Chad Bryant Racing team. When the white flag flew, Self was informed that Majeski was out of gas. However, on the backstretch, Majeski gained some momentum, but when he went into the final corner, his car sputtered. Self pounced on the opportunity to win his third race this season.

Starting from the pole position, Self led 85 laps, and his No. 25 Venturini Motorsports crew executed flawless pit stops. Before he made his final pit stop, Self was informed that Majeski would not pit again to try to stretch the fuel until the end of the race. To make up time on Majeski, Self only pitted for enough fuel to make it to the end of the race. As he remarked, any slip up by his pit crew, if he took tires, or if they took more fuel, he would not have won.

Despite the excitement in the race, only 11 of the 18 drivers finished the race, and the field spread out quite quickly. Only three cars finished on the lead lap. Bret Holmes used fuel strategy and a fast No. 23 Chevrolet to come in third place.

In fifth place was Tanner Gray in the No. 54 DGR-Crosley Toyota. Full-time drivers Travis Braden, Christian Eckes, and Tommy Vigh Jr. came in sixth, seventh, and 17th place, respectively. For Eckes, finishing behind his teammate Self further hurts his championship hopes. Eckes dealt with mechanical gremlins in his No. 15 Toyota for parts of the race.

Only 11 of the 18 drivers finished the race, so lapped traffic was really not an issue for the leaders. The VizCom 200 is Self’s sixth career ARCA Menards Series win, and his first win at Michigan International Speedway. The 28-year-old Self, from Park City, UT, now has the most wins this season with three, breaking the tie with Ty Majeski.

Unofficially, Michael Self is the ARCA Menards Series points leader with 2005 points. Holmes is 60 points behind, and Braden,  Eckes, and Graf Jr. rounding out the Top 5 in the point standings. The VizCom 200 at Michigan International Speedway was the ninth race of the ARCA Menards Series season, and there are 11 races remaining this season.