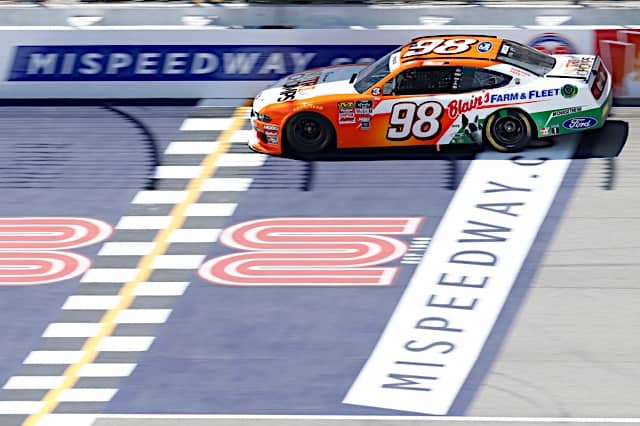 They should take the mirrors out of the race cars. That’s all I gotta say after today.

Briscoe qualified 14th, and he gradually picked up positions despite his No. 98 Stewart-Haas Racing Ford being “loose all day long,” Briscoe said.

He and his team planned to utilize some fuel strategy to finish well and even gain on where they had ran most of the race.

“I was going to finish in a solid position,” Briscoe said, even though he didn’t accrue any stage points.

However, on lap 78, some misfortune ruined Briscoe’s strategy.

“The No. 99 [Tommy Joe Martins] got loose underneath me and came up the race track and hit me in the left rear,” Briscoe said. “It knocked me sideways.”

As a result, Briscoe’s spun out, bringing out the sixth and final caution in the LTi Printing 250. Fortunately, he didn’t hit anything and escaped the incident without damage.

Briscoe rebounded to gain spots, and he felt he was a top three car.

“After that caution, the car was really the best it had been all day,” Briscoe said. “We were two or three tenths better than the leader. Unfortunately, getting stuck in traffic and racing some guys hard side-by-side cost us all some time, which cost us like six seconds on the race track.”

So instead of finishing perhaps inside the top five, Briscoe brought his No. 98 Ford home in seventh.

Briscoe was pleased with the performance of his team though. The car got better throughout the race, “which is always good,” Briscoe smiled, but he stressed the importance of qualifying better.

Briscoe had a fast Ford, but said the restarts were “aggressive because this place is so narrow.”

Once green flag racing went for more than a few laps, “we were single file,” Briscoe said.

Momentum, Briscoe noted, was key, but he attributed that to the type of racing at Michigan.

“Even though we knew that [momentum was important], it doesn’t make fun nonetheless,” Briscoe said.

Briscoe left Michigan sixth in the point standings, and he is the highest rookie so far. He currently has a 172-point margin above the playoff cut line, so the 24-year-old appears to be in good shape to make the NASCAR Xfinity Series playoffs.

More good finishes like the one he had at Michigan, especially if he both qualifies better and avoids any incidents, will have Briscoe in contention for wins this season.