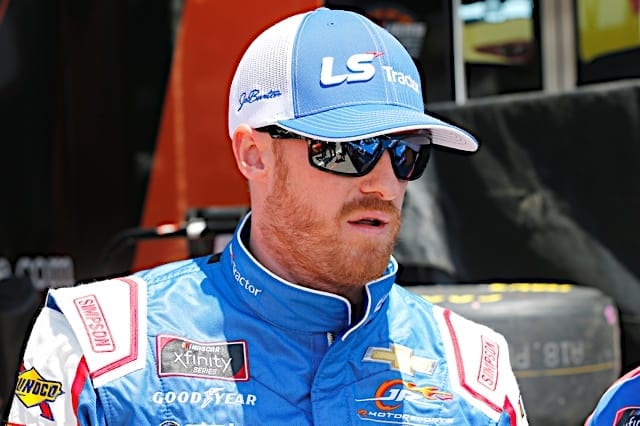 The LTi Printing 250 at Michigan International Speedway on Saturday afternoon (June 8) was the third NASCAR Xfinity Series start of the season for Jeb Burton. He finished his first two races of the season in fifth and seventh place, respectively, so he wanted to follow those efforts up with a good finish in this race.

So excited about this partnership!! https://t.co/ef4H6zAhuJ

Yet Burton didn’t garner his desired level of success at Michigan. He said after the race he and his team were unable to put everything together in the race. Burton repeatedly described his feeling after the race as frustrating.

Early in the race, Burton said Tyler Reddick got loose as he drove down the backstretch on lap 13 and started to turn sideways. Reddick saved his car from spinning, and ultimately won the race. The same could not be said for  Burton. The domino-effect from Reddick slowing down caused Burton to spin out, bringing out the second caution of the day.

Luckily, Burton saved his No. 8 Chevrolet from getting significantly torn up, and he noted his pit crew made the necessary repairs.

Burton eventually recovered from the spin to finish in ninth. However, he didn’t earn any stage points. Even though he isn’t racing for a championship, he still lamented about how he struggled to pass other cars.

“We just missed it. We got to be better,” Burton said.

While he has confidence in his JR Motorsports team, he admitted, “When you don’t have many opportunities and you miss it and you want more, it’s just frustrating.”

When asked what finishing position his No. 8 Chevrolet was capable of, Burton shook his head and said, “I don’t know.”

Suffice to say Burton wanted more, but he begrudgingly labeled a ninth-place finish is a solid day.

Burton feels pressure to perform well given he is only competing part-time for JR Motorsports this year. Although he will race again this season in the No. 8, Burton left Michigan disappointed in his performance.