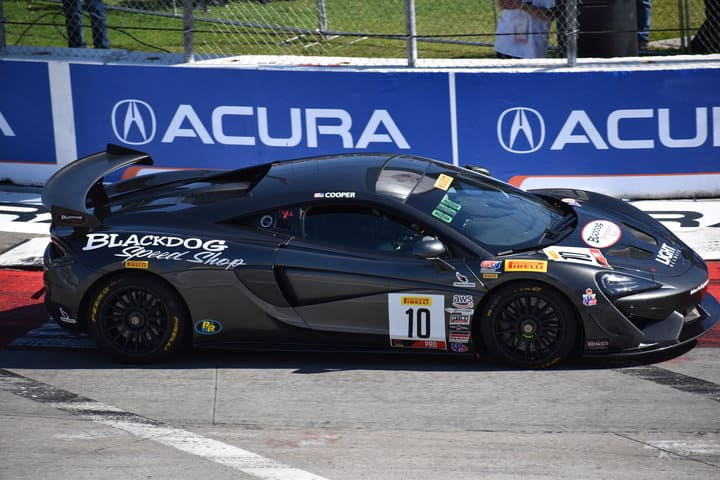 The Pirelli GT4 America Sprint teams were first on-track for their 15 minute session. The session did see a couple of spins for Marko Radisic and Shane Lewis, but neither car was damaged.

Much like in the Monster Energy NASCAR Cup Series, tire wear was critical. Getting a good lap down early was crucial.  Cooper was able to do that with a lap at 85.687 miles per hour to win the pole.

Cooper’s lap was one-tenth of a second faster than Team Panoz Racing’s Ian James.  Spencer Pumpelly was third fastest in his Porsche, followed by the previous generation Porsche of CRP Racing’s Matthew Brabham.  Despite his early spin, Lewis was able to qualify fifth.

In the Am class, the ascension of Jarret Andretti (who qualified seventh overall) to the Pro class has opened things up quite a bit. That said, Ian Lacy Racing’s Drew Staveley is still here and still a tough out.  Staveley won the Am pole and qualified sixth overall with a lap at 84.522 seconds.  That lap was nearly six-tenths of a second faster than Park Place Motorsports’ Alan Brynjolfsson.  Tony Gaples, in the second Blackdog Speed Shop McLaren, starts third, followed by the BMW of Sean Quinlan and newcomer Erin Vogel in an Audi for Flying Lizard Motorsports.

Race No. 1 for Pirelli GT4 America Sprint teams is scheduled for 3:40 p.m./et, Saturday afternoon and will be streamed live at gt4-america.com. The grid for Race No. 2 on Sunday will be determined by the fastest lap times in Race No. 1

In Round 1, it was Murillo Racing’s Christian Szymczak that was quickest with a lap at 85.118 mph to claim the overall pole.  The team is entered in the GT4 West Pro-Am division.  This lap was nearly six-tenths of a second faster than Rearden Racing’s Vesko Kozarov, who won the GT4 West Am pole.  NOLAsport’s Matt Travis was third overall, but fastest in the Pirelli GT4 America SprintX Pro-Am (the nominal top division).  AutoTechnic Racing’s Kris Wilson was fourth overall in his BMW, good for the Pirelli GT4 America SprintX Am pole.  Andretti Autosport’s Colin Mullan will start fifth.

Pirelli GT4 America SprintX/GT4 West Race No. 1 is scheduled to go green at 8:30 p.m./et, Saturday.  This race will also be streamed live.

In the second group, it was NOLAsport’s Jason Hart that was fastest overall with a lap at 84.837 mph.  The lap was ultimately four-tenths of a second faster than what Travis accomplished in Group No. 1.  Hart’s lap was one-tenth of a second faster than Stephen Cameron Racing’s Greg Liefooghe.  Matthew Keegan was third overall in the Team Panoz Racing Panoz Avezzano GT4, winning the Am pole in the process.

ST Racing’s Jason Wolfe won the GT4 West Pro-Am pole with a lap at 84.414 mph, good for fourth overall.  Wolfe’s lap was seven-sixteenths of a second faster than Murillo Racing’s Kenny Murillo, who is making his first start in GT4 equipment and his first race of any kind in SRO America since a nasty crash last May at Lime Rock.

Race No. 2 for Pirelli GT4 America SprintX and GT4 West teams is scheduled for 5:45 p.m./et, Sunday afternoon and will also be streamed live.