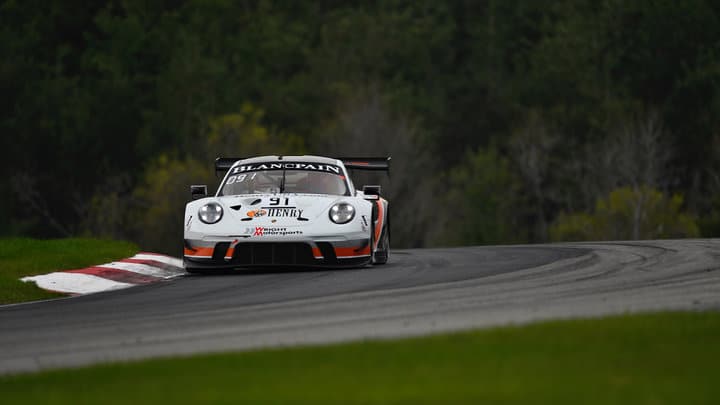 In the first session, it was Molina who was fastest with a lap of 92.673 mph in his Ferrari.  That lap was more than a half-second faster than Wright Motorsports’ Scott Hargrove in his Porsche.  The second row will be comprised of K-PAX Racing’s two Bentleys.  Rodrigo Baptista will start the No. 3 in third with Andy Soucek in the No. 9 alongside.  Alegra Motorsports’ Daniel Morad will start fifth.

In Pro-Am, RealTime Racing’s Mike Hedlund was fastest in class with a lap at 91.205 mph, good enough for sixth overall.  The lap came despite Hedlund not driving a race car in 2019 until Friday and not having known that he was going to race until Wednesday.  Hedlund’s lap was eight-hundredths of a second faster than Wright Motorsports’ Anthony Imperato.  Gradient Racing’s Till Bechtolsheimer was third in Pro-Am, followed by GMG Racing’s James Sofronas and Racers Edge Motorsports’ Martin Barkey.

Blancpain GT World Challenge America Race No. 1 is scheduled to go green at 5:45 p.m./et today.  The race will be streamed live at gt-world-challenge-america.com.

Early on in the second qualifying session, it was Toni Vilander with the R. Ferri Motorsport Ferrari on top.  After he set a lap at 92.957 mph, Vilander was a second clear of second-place and seemed to be untouchable.

Then, Campbell went to work.  Campbell’s first lap was within a couple of tenths of Vilander and moved him up to second overall.  On his second lap, Campbell set his pole winning lap to give the Pro-Am No. 91 Porsche the overall pole.

Campbell’s lap was more than a third of a second faster than Vilander, who will still start on the Pro pole.  Patrick Long in the second Wright Motorsports Porsche will start second in Pro, followed by Alegra Motorsports’ Michael de Quesada and the Bentley of K-PAX Racing’s Àlvaro Parente.  Alegra Motorsports’ Wolf Henzler will start fifth in class.