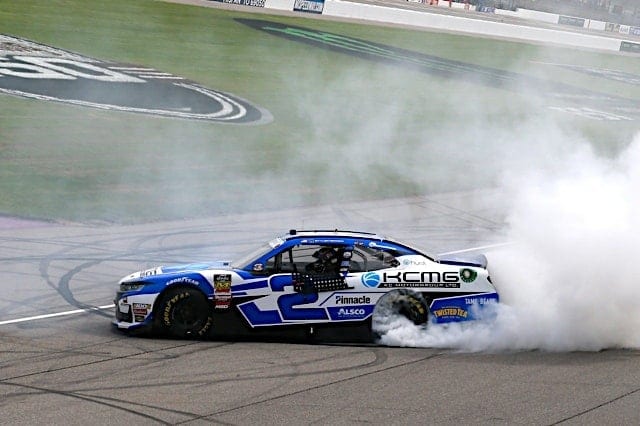 Tyler Reddick needed to be reassured on the radio several times down the stretch of the LTi Printing 250 at Michigan International Speedway on Saturday afternoon (June 8) that his No. 2 Chevrolet had enough gas to make it to the finish.

He had already watched his main rivals, Christopher Bell and Cole Custer, pit from the lead because they were too short on fuel to even try making it to the finish. Reddick knew he had pitted much more recently than them but just wanted to be absolutely certain he was good to go.

It turns out he had nothing to worry about. Even while saving fuel and seeing Noah Gragson and Michael Annett start to get closer in his mirror near the end, Reddick was able to cruise through the final 10 laps at Michigan to capture his third win of the 2019 NASCAR Xfinity Series season.

That pulls Reddick even with Bell and Custer for the most wins through 13 events, but also gives Reddick more victories than he had in all of 2018, when he won the series championship.

“Man, I just didn’t want to burn a lot of fuel there,” Reddick said in victory lane. “Our KCMG Chevrolet was really good, I just made some mistakes on pit road, and we didn’t get the track position until the end there when [crew chief] Randall [Burnett] made the call he did. All in all a great team effort. I didn’t do the thing I needed to do off the racetrack, but man that was a great car.”

Fuel mileage reared its head almost from the start of the race’s final stage, as Chase Briscoe pitted with more than 50 laps remaining with thoughts of not stopping again. Ironically, it was his Ford that spun to bring out a caution just a few laps later, putting into motion the most critical sequence of the afternoon.

Bell was the leader at the time and faked coming down pit road before staying out due to a miscommunication with his team, with Custer following suit in second. All of the other leaders pitted, and the race stayed green the whole way until the checkered flag.

Earlier on, it looked like Menard, the one Monster Energy NASCAR Cup Series driver entered on Saturday might spoil the party. After starting from the pole, he led 56 laps on the day and nearly swept the first two stages before Bell passed him right before the end of stage two.

Even though he never was quite as fast after that, Menard said he thought he learned some things that could serve him well in Sunday’s Cup race.

“It’s kind of interesting how the lines kind of moved around,” Menard said. “I couldn’t make time on the bottom, and normally you can here. The car was really fast out front, a little on the loose side, and then when you get behind, it’s kind of like you have to adjust more when you get in traffic, and I just got too tight at the end.”

With Reddick, Bell and Custer combining to win the last seven Xfinity Series races, there’s no question they are as much of a Big Three as the Cup Series had in 2018. Still, with Reddick’s average finish now standing at 3.9 heading to Iowa Speedway next week and last year’s title-winning experience to fall back on, it’s hard not to think he has a slight edge for the moment in what should be a superb battle the rest of the way.