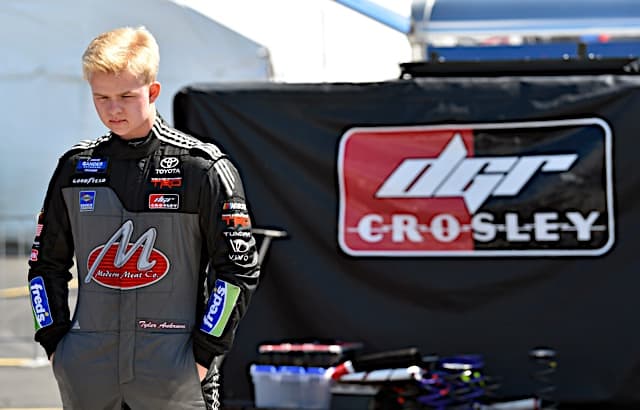 Tyler Ankrum had an up-and-down night at Texas Motor Speedway Friday (June 7), and when the checkered flag flew, he walked away with a career-best third-place finish.

But the box score doesn’t even begin to tell the full story.

Before he even took the green flag, Ankrum became the sixth Gander Outdoors Truck Series driver to have his high school graduation ahead of pre-race ceremonies. Much like those that have come before him (Erik Jones, Cole Custer, Todd Gilliland, to name a few), the driver of the No. 17 DGR-Crosley Toyota missed his scheduled graduation in favor of racing.

Very cool. @TylerAnkrum couldn't attend @lakenormanhigh graduation today because he's a little busy racing in @NASCAR_Trucks — so Texas Motor Speedway held a graduation ceremony for him, and his family before the race.

When the first caution flew for a Gus Dean incident, Ankrum was also on pit road with a cut tire and right side damage to his truck. The team was able to make repairs, but lost two laps to the rest of the field along the way.

.@TylerAnkrum took some damage. His team has put fresh tires on the truck. #NASCAR #SpeedyCash400 pic.twitter.com/PGb3wRNIGC

“Holy cow! I feel like I’ve driven 900 miles,” Ankrum said with a grin on his face after he climbed out of his truck. “I just made a mistake in the beginning and I hit the wall off of (Turn) 4. I wasn’t expecting the track to change with the Firestone tire (IndyCar) like it did, so when I went down in 3, the nose just took off on me.

“It was about 10 laps later, we cut the right front tire and I put it in the wall again. I kind of caught it going down the backstretch, and I almost saved it. I really didn’t hit the wall that hard, and we were able to get back out there. At that point, we were two laps down just trying to battle back. I knew we had a really good truck.

Despite being two laps down after the first spin, Ankrum didn’t let the pressure get to him and managed to get back on the lead lap, thanks in large part to the high number of yellow flags that flew Friday night. And even though those free passes were what allowed him to do so, Ankrum was running as high as second and third after rejoining the lead lap.

But his time on the lead lap was cut short while he raced side-by-side with Stewart Friesen.

Some say @TylerAnkrum is still sliding through pit road to this day.

“I actually thought we had a truck to win there at that point, and then Friesen sucked me around just like he just did to Todd [Gilliland], and I thought once again that was game over,” Ankrum continued. “Once again, I was able to save it down pit road and that blew up on Twitter, which was really cool to see.

“Once again we were two laps down, and at that point, I thought it was over, but there were still about 60 laps left and a lot of racing to go. Crew chief [Kevin] ‘Bono’ Manion told me to keep my head up, and that’s exactly what we did. Overall, awesome night. We knew we had a really good truck in practice and thought we had a truck that could win.”

But what might have been and what could be are at risk in the coming weeks.

“It is in doubt for the next two races, absolutely. It’s unfortunate,” he confirmed after touching on figuring out sponsorship. “We did take the gamble of announcing we were running full-time, but it’s nothing between us and DGR. It’s not like we’re not paying our bills or anything. They’ve been awesome with us.

“I don’t think if we were to work with anyone else, they would be as lenient as they are. The whole organization at DGR believes in me and what I can do. It just makes me super grateful to have them on my team. We’re working really hard to pull together for these next two weeks until we get to Chicagoland [Speedway].”

While a third-place finish, especially in the extraordinary fashion Ankrum achieved it with, is impressive, it makes the job of securing financial backing for the next two races at Iowa Speedway and World Wide Technolgy Raceway at Gateway a little easier.

“Well, we were really hoping for a win,” Ankrum said. “A win makes everything a lot easier, but winning and running up front is everything, and we did that tonight for a majority of the race. We were coming back from the back, but we were up front for a good part of it. That was a lot of really good TV time for Railblaza, Toyota and DGR. We were able to showcase just what we’ve got, and I’m grateful.”

Assuming he can secure sponsorship to run the next two races, Ankrum will have another shot at a $50k bonus put up by Gander Outdoors as part of the Triple Truck Challenge.