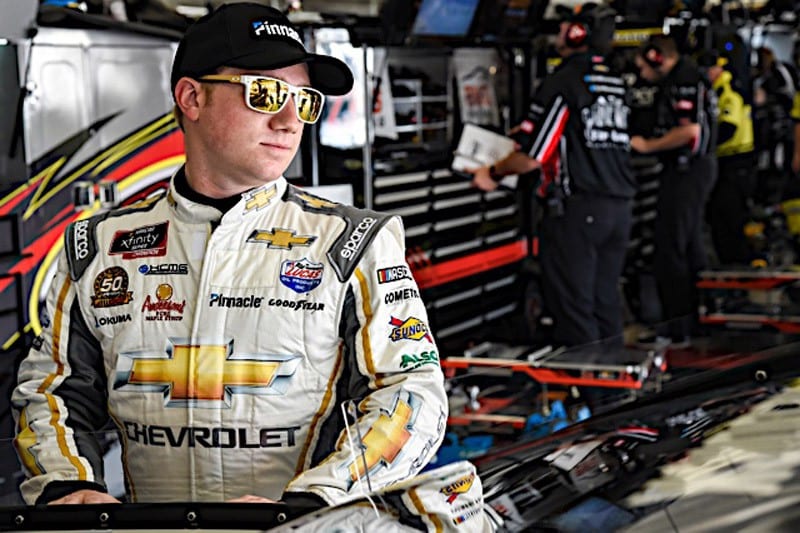 That’s essentially what Tyler Reddick and his No. 2 Richard Childress Racing team did on Saturday (June 8) at Michigan International Speedway, winning the LTi Printing 250 to respond to his two top rivals in a NASCAR Xfinity Series season that is increasingly resembling a playground game of HORSE.

The way that Reddick and company pulled off their third win of 2019, outmaneuvering their chief competition instead of simply outrunning them, only enhances the analogy. Both Bell and Custer decided to stay out during a caution on lap 78 (though perhaps not according to plan), and with numerous cautions up to that point in the race, it seemed like an acceptable gamble.

Except the race went green the rest of the way, and once they made their inevitable stops to fuel up, the race fell back into the hands of the fastest car that did stop. That one belonged to Reddick, who was unusually cautious about saving gas but still wasn’t pressured much by Noah Gragson or Michael Annett as he sailed to his third win.

Did Reddick’s bunch steal one at Michigan? Not really. After pole-sitter Paul Menard, who dominated the first half of the race, began to fade, Reddick had at worst the third-best car. He might not have taken the checkered flag if everyone was on the same pit stop cycle — Bell looked like he would have been tough to beat with everything equal — but he would have been a factor in the closing laps. And that’s despite some trouble on pit road when Reddick slid through his pit.

.@TylerReddick slides through his pit box, and goes from third to tenth on this round of stops!

Can he make his way back up to the front? pic.twitter.com/Z7uS0KbwWd

The media has already dubbed Reddick, Bell and Custer the Big Three just as they did Kevin Harvick, Kyle Busch and Martin Truex Jr. last year in the Monster Energy NASCAR Cup Series. The difference is that if anything, this season’s Xfinity Series stars are even more evenly matched, all with three wins after 13 races and all heads and tails above everyone else except Justin Allgaier in terms of laps led and stage wins. In this year-long game of “Can you top this?” Reddick just evened things up. We’ll see who pulls back into the lead next.

Huzzah for fuel mileage races. That’s not a hot take, just an acknowledgement that the high speeds at Michigan didn’t yield the most exciting racing for most of this particular June Saturday.

Menard led the entire first stage and most of the second, save for a few laps when Bayley Currey stayed out as most cars pitted and a couple more after Bell passed him late to win stage two. If you enjoy passing for the lead, you didn’t have a good time for big chunks of this race.

So while fuel mileage gambits can ruin days when there is plenty of on-track action, they can also add suspense to others that lack it. The interesting thing about Michigan is that several drivers were set up to try a long, off-sequence run to the end at different times, including Chase Briscoe and Ross Chastain.

Even with Reddick seemingly free and clear over the final 10 laps, his repeated questions to his crew about whether he had enough gas made for some drama. Gragson could have claimed his first Xfinity Series win if Reddick’s team was wrong, or Annett might have managed an unlikely second victory on the season. Those possibilities were more interesting than much of what went on for about 225 miles and evidence that fuel mileage races aren’t always bad.

Michigan is hardly the only track on the schedule where being in the outside lane on restarts is an advantage. Just the fact that NASCAR lets the leading car choose the line in which to restart is an admission that it’s fairly prevalent.

But not too many other circuits give the cars restarting on the outside as much of a boost as we just saw on Saturday, where starting on the inside didn’t just mean you weren’t going to challenge for the lead, it also relegated a number of cars to battling just to ensure they didn’t lost multiple spots to cars on the outside on the first lap.

Other than adopting a cone rule like some short tracks have, which seems extremely unlikely at the top levels of NASCAR, there’s no easy solution to this problem. It’s also not like Michigan has a long history of its lower groove being rubbish — Menard admitted after the race that he was surprised you couldn’t make time down low, which is generally the case at this track.

Still, it’s definitely suboptimal for cars to have the equivalent of a running start just because of where they line up, particularly behind the leader where the advantage goes to drivers simply because they are in even-numbered spots in the running order. Hopefully, the same won’t prove true on Sunday.

As a counterpoint to the absence of excitement at the front of the pack, there also wasn’t a ton of ugly on Saturday. The first stage didn’t have great flow to it thanks to a gaggle of early cautions, but things settled down the longer the race went on, as evidenced by the long green flag run to end the day.

Perhaps the only thing that really qualified was the stage one incident involving Riley Herbst, which didn’t look bad when it happened but ended his day after just 12 laps.

CAUTION: Issues for both @rileyherbst and @JebBurtonRacing bring the action at @MISpeedway to a pause.

We’ll call that a win overall, with the rest of the race mostly ugly-free.

It’s come to my attention that most of you do not consider Justin Haley an underdog, but he was the closest thing to it in the top 10 on Saturday. Ryan Sieg ran as high as fifth at one point, but he fell back late and ended up 17th, meaning he’s had his two worst results of 2019 in the last two races.

That hands the top underdog performance over to NASCAR’s ironman, Chastain. Despite choosing to run for points in the Gander Outdoors Truck Series and competing in Texas Motor Speedway on Friday night, Chastain was back in the No. 4 Chevrolet for JD Motorsports and was solid with a 14th-place finish, As noted, he was one of the drivers who considered playing fuel mileage strategy for a chance at the win, but he simply didn’t have the speed to stay in position to pull off the upset and the cautions didn’t fall exactly right anyway. Still, a nice day for him.

Only one Cup Series driver competed at Michigan, and Menard looked like he might be the class of the field until almost the halfway point. He then made a bit of a late-race charge after Bell and Custer made their pit stops, but Gragson caught and passed him in the closing laps, leaving him in fourth place.

In his post-race interview on FOX Sports 1, Menard noted that he got too tight over the final run after being loose prior to that and that adjusting to the dirty air in the pack took him longer than he expected. It would have been fun to see him win just to see what kind of victory lane celebration the normally reserved Menard would bust out, but alas.

“I’m not going to lie to you, I just got some Twisted Tea in my eye like Regan [Smith] did at Talladega [Superspeedway] and that stuff burns a little bit.” –Tyler Reddick

“Top 10s are good, but they’re kind of a moot point in this series anymore. You’ve got to be up there for wins and bonus points. So we’re up there, we’ve got a chance for them now, and that’s good, and we’re having a lot of fun.” –Michael Annett

Saturday’s race was more intriguing than thrilling, but that’s okay. There was a sense of suspense all the way to the end and good racing within the top 10 at times to make up for the lack of lead changes.

Now that Reddick has drawn even with Bell and Custer, all eyes will be on who takes the lead next and whether any of the Big Three, 2019 Edition, can put together a string of victories to manufacture some separation.

How about some short track racing? The 7/8-mile layout at Iowa Speedway beckons for the first time in 2019, and because the Cup Series doesn’t compete there, you can be assured no ringers will be on hand. Chastain probably will, though.

One thing to note is that none of the Big Three has won the spring Iowa race, although Bell won the fall race there last season. Allgaier is the defending race winner and would undoubtedly love to repeat to start turning 2019 around in his favor.

Coverage of the CircuitCity.com 250 presented by Tamron begins at 5:30 p.m./et on Sunday, June 16, and it is the final race of the Xfinity Series season on FS1 before the NBC networks take over at Chicagoland Speedway.