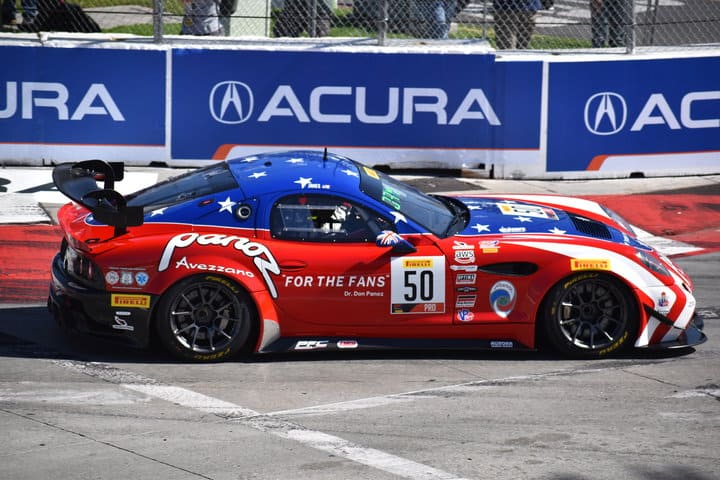 Team Panoz Racing’s Ian James on Sunday morning (June 9) was able to do exactly what he could not do Saturday.  He was able to get past Blackdog Speed Shop’s Michael Cooper for the lead.  Once there, James was able to pull away to take the victory in Race No. 2 for Pirelli GT4 America Sprint teams at Sonoma Raceway.

“[Saturday], I tried all the conventional ways to get by [Cooper] and there was no way to get by him,,” James said after the race.  “So, I had a different strategy.  Forced [Cooper] into a bit of a mistake in turn 11, then managed to get beside him and hang it around [in turn 2].”

By virtue of having the fastest lap on Saturday, Cooper had the pole for the start.   On the start, Cooper attempted to run away from the pack, but his advantage was short-lived.

In turn 2, Park Place Motorsports’ Alan Brynjolfsson made an aggressive move to the inside of CRP Racing’s Matthew Brabham.  That was successful, but he ran into the side of Tony Gaples.  The contact resulted in Brynjolfsson spinning out and a large chunk of debris ending up on track that brought out a caution.  The impact with Gaples busted the left side radiator on Brynjolfsson’s Porsche.  While he was able to drive back to the pits, he was done for the day.

After the restart, James really put the pressure on Cooper.  After a failed attempt at turn 7, Cooper used an over-and-under move exiting turn 11.  The two drivers raced side-by-side for the length of the frontstretch and up the hill.  James was able to clear Cooper in turn 2.

Once out front, James quickly opened up a gap over Cooper’s McLaren.  The lead eventually increased to nearly five seconds as James managed hiss lead on his way to victory.

Coming to the finish, James coasted to the line.  That dropped his margin of victory to 1.525 seconds over Cooper.  The Racers Group’s Spencer Pumpelly finished third for the second consecutive day, but was much closer to the leaders.  Brabham was fourth, while Jarret Andretti was fifth.

In Am, it was once again Drew Staveley‘s day.  He never really faced any direct competition in his class on his way to the weekend sweep.  In fact, Staveley spent much of the race in a duel for fourth overall with Andretti.  A slip in turn 3 allowed Brabham to take fifth away, but he was well ahead of the rest of the Am cars at the finish.

The Pirelli GT4 America Sprint series has a long summer break.  Rounds 10-11 will be held at the end of August at Watkins Glen International.