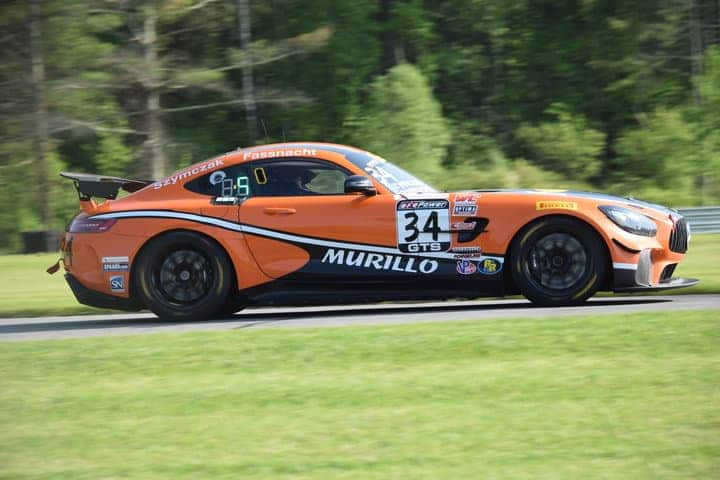 Murillo Racing’s Christian Szymczak and Kenny Murillo were the beneficiaries when Stephen Cameron Racing’s Sean Quinlan had a drive-through penalty late.  Once Quinlan pitted, Szymczak took over the advantage and held on for an easy win.

“The car was really good,” Szymczak said after the race.  “[Sonoma Raceway] is really hard on tires, so we had to take care of them.  This race was really a chess game.  We really had to think about things and not push too hard in order to keep the car underneath us.”

NOLAsport’s Jason Hart led from the pole in his Porsche while Greg Liefooghe gave chase in his BMW.  Behind the two leaders, Team Panoz Racing’s Matthew Keegan was able to run down the two leaders in his Avezzano GT4.  It did not take long for Keegan to get ahead of Liefooghe for second.  A couple of laps later, Keegan made his move at turn 11 and took the overall lead away from Hart.

Keegan’s pass for the lead occurred only 15 minutes into the race.  Once out front, Keegan tried to open up a decent lead, but Hart was able to keep pace.

When the pit window opened, Keegan and Hart pitted relatively quickly to hand off to Dr. Preston Calvert and Matt Travis, respectively.  Meanwhile, Liefooghe stayed out in order to put down some fast laps.

While Liefooghe stayed out, Calvert beat everyone around him out of the pits with an excellent stop within two-tenths of a second of the minimum allowable time.  Travis was right behind him, followed by Colin Mullan in the Andretti Autosport McLaren and Szymczak in his Mercedes.

Liefooghe did his job and set some quick laps on worn tires.  The team was a little too quick in getting Quinlan back out on-track.  The time in the pit lane for the No. 19 BMW was four-tenths of a second under the 87-second minimum, resulting in a drive-through penalty.

The penalty squandered what was a really good position for Quinlan to be in.  He managed to maintain the overall lead by eight seconds coming out of the pits.  In addition, he was faster than Calvert in second.

Meanwhile, Szymczak began to make his move.  He was able to quickly dispatch of Mullan to take fourth.  A couple of laps later, Szymczak faked to the outside of Travis in turn 10.  Travis bit on the fake, which allowed Szymczak to get to the inside in turn 11 to take third away.

Two laps later, Szymczak ran down Calvert and took second away in turn 7.  Once in second, Szymczak rocketed away from his remaining opposition.  When Quinlan pulled in to serve his penalty with 14 minutes remaining, Szymczak inherited an eight-second lead.  From there, Szymczak continued to pull away to take the overall and GT4 West victories.

Szymczak and Murillo’s overall margin of victory was 14.897 seconds over Keegan and Calvert.  Mullan and Andretti were third, followed by Hart and Travis.  ST Racing’s Harry Gottsacker and Jon Miller were fifth.

Szymczak and Murillo won the GT4 West Pro-Am class in dominating fashion.  Their margin of victory there was 28.609 seconds over Gottsacker and Miller.  Samantha Tan and Jason Wolfe in the second ST Racing BMW were third.

Pirelli GT4 America SprintX Pro-Am was won by Mullan and Andretti after Mullan passed Travis in turn 11 with 20 minutes to go.  Their margin of victory was two-thirds of a second over Travis and Hart.  Despite the penalty, Quinlan and Liefooghe ended up third in class and sixth overall.

GT4 West Am was won by Rearden Racing’s Jeff Burton and Vesko Kozarov, who won Race No. 1 overall on Saturday.  They ended up eighth overall, a minute behind the overall winners  That said, the No. 91 Audi had the pace necessary to win, but Burton had to pit right at the beginning of the race due to a deflating tire.  They were 80 seconds behind at the end of the first lap and gained one-quarter of that gap back without the aid of a full course caution.  Their margin of victory was 47 seconds over The Racers Group’s Derek DeBoer and Dr. James Rappaport.

Finally, Calvert and Keegan’s second-place finish was good enough to earn them the Pirelli GT4 America SprintX Am victory.  Their margin of victory was 41.121 seconds over GMG Racing’s James Sofronas and Jason Bell.