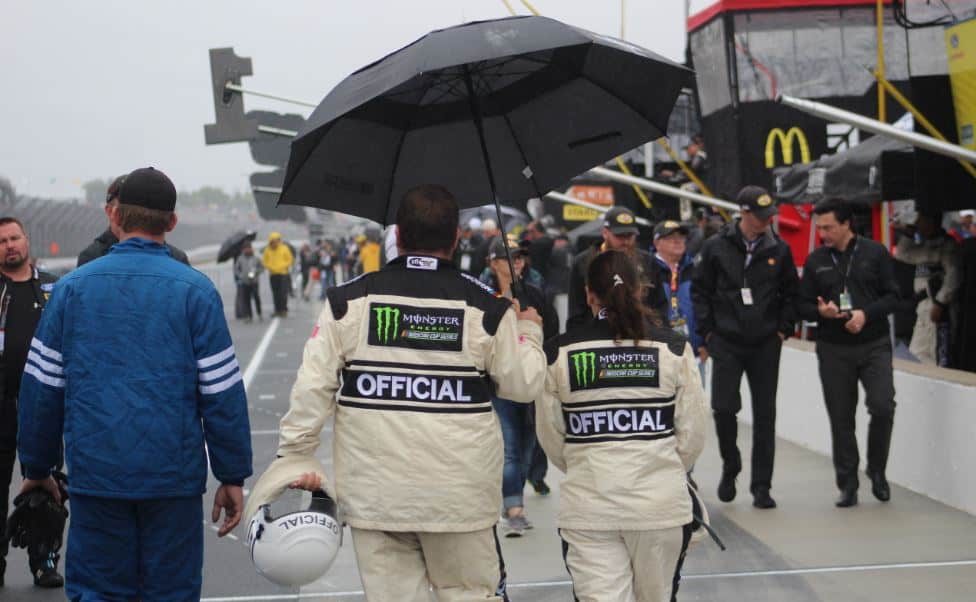 Just like at Dover last month, track drying efforts after a full day of rain initially proved successful. The grid started up and cars were on their pace laps before another set of showers popped up, ultimately delaying the green flag. Drivers complained of rain falling sideways inside their cars before NASCAR stopped the field on pit road for good.

It took several hours for officials to postpone the event as pop-up showers just wouldn’t diminish. By nightfall, MIS became a monsoon with up to a half-inch of rain expected before precipitation stops sometime Monday.

When the race does get going, Ford’s Joey Logano will start from the pole. The auto manufacturer will be gunning for its third straight win here at a track it considers home base. – Tom Bowles

Over the past month-and-a-half, Tyler Reddick has been white hot in whatever he buckles up behind the wheel in. In Saturday’s (June 8) LTi Printing 250 at Michigan International Speedway, he won for the third time in the past five races.

Reddick didn’t have the best car but did have the best strategy, managing his fuel over the final 50 circuits to be ahead of the field when others had to pit. Those others included stage two winner Christopher Bell and Cole Custer, both of whom didn’t pit during the final caution of the day (lap 78). Despite leading 20 laps, Custer finished 12th with Bell just behind in 13th.

The victory marks Reddick’s 10th consecutive top-five finish. Meanwhile, Noah Gragson tied a career-best second-place finish, with Michael Annett crossing the finish line in third, his best result on a non-superspeedway or road course since the fall Dover race in 2012. Paul Menard and Justin Allgaier rounded out the top five.

Unfortunately for Joe Graf Jr., the biggest surprise of the day came in qualifying, when he failed to qualify for the race in the No. 21 Richard Childress Racing Chevrolet. The race was set to be Graf’s debut for the team, but that will have to wait until next week at Iowa Speedway.

A picture paints a thousand words. I offer 3 from this one: pain, embarrassment, failure. I offer my apologies to @RCRNXS and @eatsleeprace I will never play it safe in qualifying again. I took a top 15 car in practice and missed the race @MISRacing #NASCAR pic.twitter.com/Gn2aeBjmoA

The series heads to the cornfields of Iowa next week, to run its first of two races at the track in the next seven weeks. Allgaier is the defending winner of the event. – Dustin Albino

Gander Outdoors Truck Series: Greg Biffle Returns and Wins it All in Texas

Ever since it was announced in March that Greg Biffle would pilot the No. 51 Kyle Busch Motorsports Toyota at Texas Motor Speedway this past weekend, all eyes have been on the semi-retired driver’s return to NASCAR for the first time since 2016. It was also his first Gander Outdoors Truck Series start since 2004 when he ran a single race at Homestead-Miami Speedway to close out that season.

Fast forward to Friday night’s SpeedyCash.com 400 and Biffle ran inside the top 10 for most of the race before putting himself in front of the field during the closing laps. He outlasted a final 10 lap sprint to the finish to beat Matt Crafton to the checkered flag and a $50,000 bonus in the first race of the Triple Truck Challenge. Tyler Ankrum scored a career-best finish in third, while Grant Enfinger and Harrison Burton rounded out the top five.

While it’s highly unlikely KBM would be able to put together a competitive truck quickly enough to put Biffle on the track for the next race in the Triple Truck Challenge, according to NASCAR, he’s ineligible for the promotion at Iowa Speedway next weekend anyway.

That determination is coming from a sanctioning body that decided to add a 13th driver to the Monster Energy NASCAR Cup Series Chase field a few years ago because of perceived cheating. You can’t tell me that an exception to such a silly rule can’t be made to allow Biffle to run for the bonus. It’s certainly possible NASCAR could change its mind and allow him to qualify for it (assuming a ride is there for him to run), but I wouldn’t hold my breath if I were you. – Beth Lunkenheimer

ARCA Menard’s Series: Michael Self Continues to Make Case for Promotion to Trucks

The end of Friday’s ARCA race put two of the top drivers as of late against each other. Since Ty Majeski made his return to ARCA, he’s been taking no prisoners. In fact, he was close to scoring his third straight victory when his fuel tank ran dry and Michael Self went blasting by him to take his sixth career victory.

Venturini Motorsports has been the rookie league team for Joe Gibbs Racing in some equations and with both Todd Gilliland and Harrison Burton underperforming, is it time to see what Self can do in the NASCAR Gander Outdoors Truck Series? His teammate Christian Eckes has been given multiple opportunities and he’s capitalized on all of them. But Self has zero starts in Trucks and seven starts in Xfinity with JD Motorsports, back when not many people had even heard of him.

Now that Self is showing his self-worth, along with his teammate Eckes, should Burton and Gilliland really be feeling the pressure down their necks especially after Greg Biffle jumped into a Kyle Busch Motorsports truck and won in his first race since 2004? Toyota has a stout lineup growing in it’s lower leagues and it’s showing as Self is pushing closer to his first career championship.

The action doesn’t stop at Michigan though, the ARCA Menards Series returns to Madison International Speedway for the Shore Lunch 200. The race is slated to begin at 9 p.m. ET on MavTV. – Christian Koelle

If there’s one lesson to be learned from this weekend, it’s that Josef Newgarden is the one to beat in the chase for this year’s NTT IndyCar Series Championship.

The 2017 series champion collected his third win of the year on Saturday night and is showing no signs of slowing down.

With a combination of stellar driving and some smart strategy calls, Newgarden has been among the most consistent drivers all year, finishing seven of this year’s nine completed races in the top five.

And if he and race strategist Tim Cindric can keep pulling off what they did on Saturday night, there’s no reason to think Newgarden won’t claim his second career title at Weathertech Raceway Leguna Seca.

While the series’ annual visit to Texas Motor Speedway was more of the same for Newgarden, it was a nice reversal for rookie Colton Herta even if the results don’t exactly show it. The youngest-ever race winner in IndyCar history had been hampered by a string of poor results, finishing no better than 12th since the series hit Barber Motorsports Park in early April.

Although the youngster’s night ended early, Herta ran up front all night, slicing and dicing with the best of them. It was a much needed showing for the entire Harding Steinbrenner Racing team, who also recently landed a multi-million dollar sponsorship deal. Buoyed by a strong performance in Texas and an influx of cash, things are looking up for the No. 88 squad. – A.J. Hecht

The sixth of those races was the second race of the weekend for TC America’s TC class.  For the most part, this was a quiet affair at the front of the field.  With 15 minutes to go, heck went down.  Shaun Webster was racing Tom Capizzi for position when he made an aggressive move at turn 2.

The team Webster drives for is Hard Motorsport and it appears that Webster simply went way too hard up the hill.  He got all four wheels off course and speared into Capizzi after hitting the curb.  This launched Webster into a series of three rolls before coming to rest upside down.  Capizzi ended up spinning out as well.

Thankfully, Webster was able to exit his BMW M235iR with some assistance from the track crews.  Once out of the car, he walked on his own to the ambulance.  Capizzi was able to continue.  Cameron Evans was able to win the race for BimmerWorld Racing. – Phil Allaway

Former F1 champion Jenson Button guested on the Sky Sports coverage of the Canadian Grand Prix this past Sunday.  When Sebastian Vettel lost control of his car in turn 4 on lap 48 and re-entered the racing line while also attempting to save his car, the incident looked simple.  Then the stewards intervened and awarded Vettel a five-second penalty that, in essence, gave the win to Lewis Hamilton.

Jenson Button gave his opinion of the Vettel penalty in the #CanadianGP, what do you think? ?
Here's what he told Sky Sports F1… ?https://t.co/0DelsweBXI

Button covered the incident with aplomb, calling Vettelʻs slip-up just a racing incident but addressing the bigger issue – that the fans were robbed of what was turning out to be a delightful battle between Hamilton and Vettel.  Perhaps the bigger message to be gleaned from what happened is that fans and pundits alike favor seeing the car that crosses the line first, ya know, actually win.

For Hamilton, Button argued that he would rather pass Vettel to grab the win rather than timing and scoring being the reason and thatʻs likely true.  In reality, however, Hamilton just earned his seventh Canadian GP win and his fifth victory this season.  He has also opened up a 29 point lead over Valtteri Bottas and a 62 point lead over Vettel.  A win is a win.  Ava Ladner

With the NASCAR race in rain delay I turned to the F1 race and watched some of that. While I can go either way on whether or not the penalty on Vettel was warranted, I respect the fact that the governing body had the balls to make the call. Personally, I thought it would have been nice to see someone besides Hamilton win a race.

Particularly since we aren’t talking about two back marker teams but rather the two most powerful teams in the sport. Balls indeed.