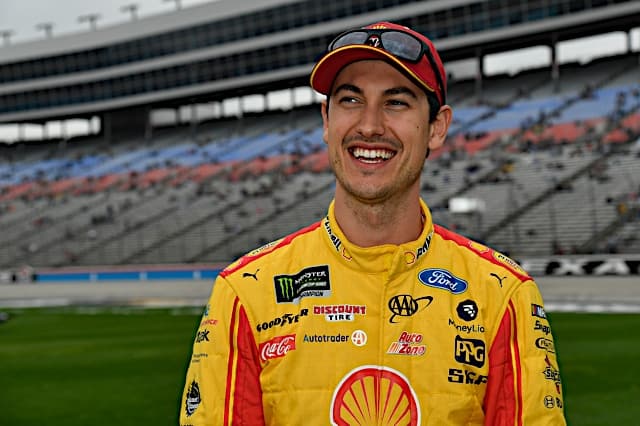 The ending wasn’t easy for Joey Logano. But on a green-white-checkered restart, the reigning Monster Energy NASCAR Cup Series champion had what it took to keep his car up front during a rain-delayed 2019 FireKeepers Casino 400.

His No. 22 Ford edged out Kurt Busch to win Monday (June 10) at Michigan International Speedway. He led 163 laps on the day, edging in front again after the final round of green-flag pit stops. But a spin by Erik Jones with five laps left gave Kurt Busch, Martin Truex Jr. and others one last shot at the leader.

However, Logano inched ahead so quickly no one ever got the chance to get alongside him. His Shell/Pennzoil car was so far ahead at the line Truex felt the leader might have jumped the start.

“The No. 22 went a whole car length before the restart zone,” Truex said. “I don’t know how you get away with that. I thought you were supposed to restart in the box.”

Truex and Kurt Busch were in a two-car draft closing dramatically on Logano before the race’s final caution. The end result meant they might have had a better shot had the yellow flag not even come out.

“Logano’s car was tough,” Kurt Busch said. “I really wanted it to go green at the end with Truex. I was just going to push Truex straight to the No. 22, that was my best shot at it. We’ll get it. This gives us reason to smile. We ran up front, we were strong, we were in our manufacturer’s backyard, but we got second today.”

In the end, Logano wound up with the biggest smile, landing Ford its third straight win at this track. It’s also his second win from the pole in this race in the last four years, responding to a push from Edsel Ford II as to how important it was to win in their own backyard.

“This feels so good,” Logano said in victory lane. “Winning at Michigan means so much to Team Penske and Ford. Best car, best team, we executed perfectly all the way through. We did a great job.”

Kurt Busch wound up second, followed by Truex and Daniel Suarez. Kyle Busch rounded out the top-five finishers after a rough final restart pushed him back in traffic.

Brad Keselowski wound up sixth, followed by Kevin Harvick. Harvick had one of the fastest cars, but a decision to take four tires on his final green-flag stop made the difference.

“We had a really fast Busch Light Ford,” Harvick said, “And just made a lot of mistakes today.”

Ryan Newman, Ryan Blaney and Alex Bowman rounded out the top 10. Only two cars failed to finish the race, both because of wrecks: Clint Bowyer and Kyle Weatherman.

Marty whines some more. But he doesn’t whine about his car failing pre race twice every weekend.

What the fluck is wrong with TRUEX? He got snookered so he whines. Nothing was done wrong. If he isn’t the center of attention, he holds his breath and stamps his feet. Always whining about NOTHING! He is a pain in the ass. Such a whiner. The whole damn team and the flucking roommate.

Michigan was my favorite track in the 70’s & 80’s. There was racing lines all over the track. Cale had the track record, about 167 mph. That means you were breaking hard in turns one & two. Now it’s follow the leader and an ineffective draft at 200 mph. My how things have changed.
I couldn’t believe Truex’s interview. He should be embarrassed.