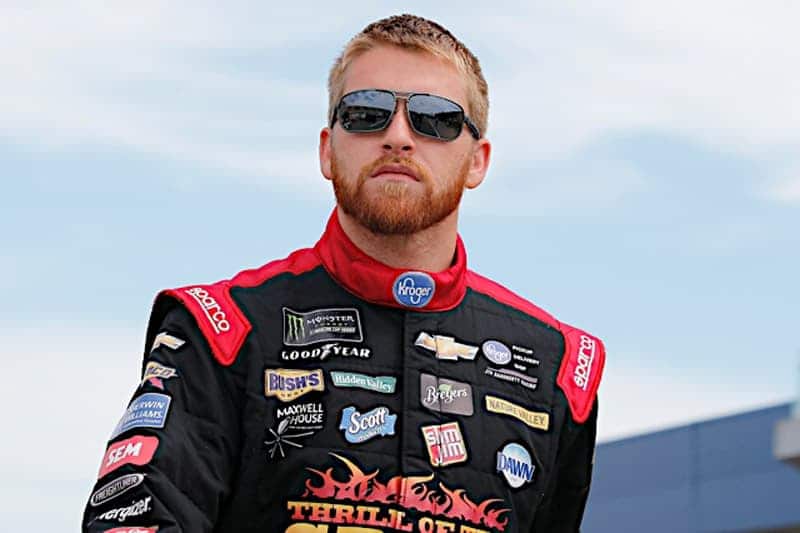 Chris Buescher surprised no one on Monday (June 10) by being the top underdog in the FireKeepers 400 at Michigan International Speedway. The No. 37 JTG Daugherty Racing Chevrolet crossed the stripe in16th position.

The result ended the longest run of consecutive top-15 finishes in his Monster Energy NASCAR Cup Series career, but the day was far from a disappointment. There was no case of the Mondays for Buescher or his team. The driver steered clear of trouble and the team executed on pit road. The former Xfinity Series champion ran inside the top half for nearly the entire race.

Buescher qualified in 31st, but moved up steadily after the start.

Behind Buescher, there weren’t too many underdogs who had banner days. No one else managed to finish in the top 20. Ryan Preece, Buescher’s JTG teammate, was in contention for a top-20 finish, but was shuffled back on the green-white-checkered restart, winding up 25th at the end.

Matt DiBenedetto was the next highest finishing underdog behind the No. 37, bringing his Leavine Family Racing Toyota across the finish line in 21st place. Like Preece, DiBenedetto was in the top 20 before getting shuffled back after the final restart. Meanwhile, Corey LaJoie finished 23rd with Matt Tifft just behind in 24th.

On Saturday (June 8), the NASCAR Xfinity Series drivers enjoyed their moment in the sun before it disappeared for the weekend. Highlighting the efforts of the other guys was Ross Chastain. While Chastain’s 14th-place finish may come as a surprise to nearly no one, the underdogs sweeping positions 14 through 20 was worth noting. Particularly at Michigan, where both the handling and horsepower of the car play a much bigger role in a driver’s success than at some of the other speedways on the schedule. Jeremy Clements grabbed the 15th position in the final rundown, followed by Gray Gaulding in 16th and Ryan Sieg in 17th. Tommy Joe Martins finished 18th, B.J. McLeod 19th and Stephen Leicht rounded out the top 20.

Clements has been a fixture in the Xfinity Series for over a decade, with 2019 marking his ninth full-time season on the circuit. Hailing from Spartanburg, SC, Clements has been an owner/driver since 2011, and is the benchmark by which other teams with similar resources are measured.

Clements first appeared on the national scene in the ARCA Series, making 40 starts between 2002 and 2008, earning a win in 2007 at the now-defunct Nashville Superspeedway. Clements never ran a full schedule in ARCA but finished in the top 10 in over half of his starts.

Clements is undoubtedly best known for his stunning win in 2017 at Road America. But beyond the victory, he has many other equally difficult accomplishments. First, Clements has earned at least one top-10 finish in seven straight years with his homegrown team. More remarkable, though, is how consistently he is running at the end of races. Since the 2014 opener at Daytona International Speedway, Clements has started 178 Xfinity races and been on track at the end in all but of 19 of them. To put that in perspective, the exponentially better-funded No. 18 car fielded by Joe Gibbs Racing has failed to finish 13 of those same events.

For 2019, Clements is once again behind the wheel of his self-owned No. 51. His best showing thus far is a trio of 13th-place finishes, but Clements has been remarkably steady. Look for Clements to continue his run of top-10 results and possibly more as the season progresses.

That’s it from Michigan!

I know you’re a football star on @NASCARONFOX now @CoreyLaJoie but don’t think I won’t race the heck out of you for 31st when I’m back in the car. @FS1

A little late to this but how about @TommyJoeMartins P18 working with a new crew chief! P/C @MISpeedway pic.twitter.com/gBwCeuoJmj

It was a crazy race for us after we got spun, but we came from the back to finish p16. Looking forward to @iowaspeedway next Sunday! #NASCAR #tmtcareers @TMTCareers #movingpeopleforward https://t.co/hiGk5pCW7l #LTiPrinting250