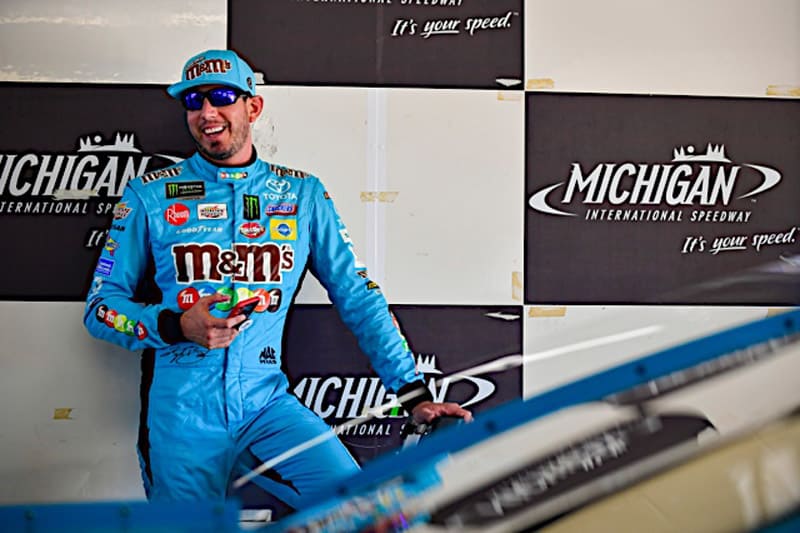 In a race delayed by rain, it didn’t matter for Joey Logano as he led over 3/4th of the entire FireKeepers Casino 400 at Michigan for his second win of the season and the first since Vegas in March. Did the win boost Logano up in the power rankings?

For Kyle Busch, it was an unusual day for the Joe Gibbs Racing driver. He wasn’t up front for most of the race, but ultimately was able to finish in the top five. Busch received all 14 first place votes last week. Will that continue this week?

All of this and more, below!

It was a relatively quiet day for Kyle Busch as he was in the top 15 for most of the day until the final stage in which he climbed into the top 10 and eventually the top five.

On a brighter note, he chose a driver that hasn’t run in the Truck Series in more than 10 years to compete for Kyle Busch Motorsports and what did he do? He won!

Kyle Busch the owner was more than a little pleased with his decision.

“No laps lead this week? Glad he’s letting the other kids have a turn.” Dan Greene, FrontStretch

If there was one word to describe Joey Logano’s day on Monday at Michigan, that word would be “domination”. Logano led 161 of 200 laps and seemingly was toying with everybody for most of the race. This comes at a crucial time for him as he had an 11-race winless streak with his last win coming all the way back in March.

Can the streak continue? Stay tuned to find out…

I love this track and winning here for everyone at @fordperformance & @team_penske! Our 22 @shell @Pennzoil team took us from the pole to the ? #TeamJL #NASCAR #FireKeepers400 pic.twitter.com/GmjoOGW5Hk

While his teammate won the race and earned five playoff points, it was a semi-quiet day for the blue deuce. Bad Brad led 10 laps during green flag pit stops and salvaged a top 10 after the last late restart. Solid day for the No. 2 team.

He even got to have a special tour from Ford this past weekend!

Made it to @MISpeedway for the big races. It’s been an exciting few days of @BKCFF charity events and a special tour of the @HenryFordEstate with @FordPerformance thanks to @sweepstakes1901

Michigan served as a solid rebound for Martin Truex Jr. and his entire crew after a blown engine took him out the week prior in Pocono.

We all have to wonder, though, what the end result would have been if the caution didn’t come out for Erik Jones‘ spin?

Great day for the @AutoOwnersIns team. 22 had everyone covered today, but proud of how we ran and learned a lot for when we come back to Michigan in August. Enjoy the off week. See ya in Sonoma. #TeamToyota pic.twitter.com/evD6dswOBW

“The every-other-race-he-wins trend has ended, but Truex nearly kept it going at Michigan.” –Adam Cheek, Frontstretch

For Harvick, ONCE AGAIN, it was same story, different weekend. Harvick’s pit crew elected to take four tires instead of two like the rest of the leaders did and he paid the price for it.

Also, once again, he wasn’t in the mood to talk.

Kevin Harvick when asked what he thought of the four-tire stop and what his chances to win would have been if they had taken two: #nascar ⁦@NASCARONFOX⁩ pic.twitter.com/YdD6BG3bdy

It was a fantastic day for Busch as he was in contention all race long. Even though he finished runner-up, he was more than pleased.

That win for the No. 1 team is coming, people.

Next for Kurt Busch? He is going to the 24 Hours of Le Mans race in France with team owner Chip Ganassi!

Gave her all she had and then some! We put on a hell of a show with this package. Thx to @CGRTeams for the setup changes from last week. Cheers to @TeamChevy & @MonsterEnergy ?enjoy the off week-I’m headed to #LeMans pic.twitter.com/plOP6NImsA

“Hamlin wins for quote of the week. “It’s wasn’t that passing was hard. It was impossible.” – Michael Massie, Frontstretch.com

Early on in the race, it seemed as though Hamlin’s car was one that would contend, overtaking the leader and spending some time up front. The fun stopped there, though, as he had to settle for a 11th-place finish.

It looked like Elliott’s streak of good, solid runs was going to continue … until he hit the wall coming off of fourth and had to settle for 20th.

For their sake, here is hoping Elliott and the entire Hendrick Motorsports team regroups during the off week.

Can we just take a second to appreciate this view and this sound? ?@chaseelliott | #Pocono400 pic.twitter.com/DQTWqX2vgi

For Bowman, it was a disappointing day as he only got 10 stage points and had to settle for a 10th-place finish.

Sadly, that was the best of all four Hendrick Motorsports cars.

Top 10 at @MISpeedway. Know we had a better finish in us, but still going forward which is what matters most. ?? @TeamHendrick @nationwide88 pic.twitter.com/Af0d13Hw2L

Blaney had a much-needed good run in Michigan, earning his first top 10 since Bristol back in April.

Here is hoping the good runs continue for Blaney.

“Consistently in the top 10, and for what it’s worth, he is looking like Chase did before he got the win at Watkins Glen.” -Dutzar Jr

It was a solid day for the Chip Ganassi racer as he had to climb his way up through the field on an extremely tough day to pass, ultimately finishing 14th.

“(Larson) Is going to invite Harvick to his bad luck support group..” – Greene

It was a fantastic day for Suarez as he scored a career best fourth-place finish.

Will he be the first SHR car to get to victory lane? Find out in Sonoma…

“We just struggled for whatever reasons on the long runs in the first half of the race. We were able to make some adjustments and come back, and I am proud of my guys.”@Daniel_SuarezG earns fourth-place finish at @MISpeedway. #SuarezNation https://t.co/3NM1x0u8CX

“ It hurts for me to say it, but Daniel Suarez is about to pass Clint Bowyer in points.” –Trey Norville

What do you mean “goes missing over the break”… they’ve not showed up all year!