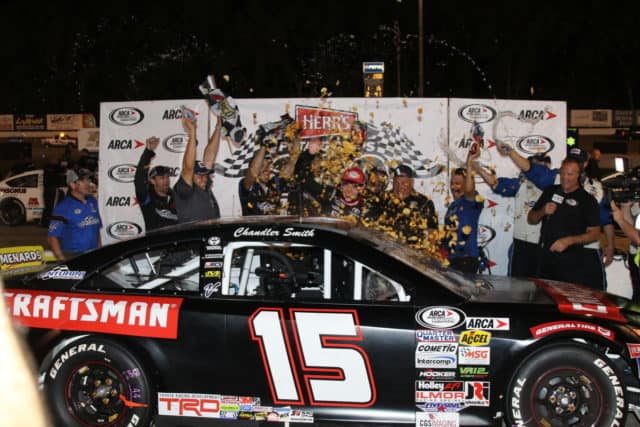 Last weekend, championship points leader Michael Self passed Ty Majeski on the last lap to secure his sixth career win. After a few weeks of just plain bad luck, Self was able to come across the line in first with some good luck finally on his side. Self currently holds the points lead by 60 points over Bret Holmes.

The tight points battle heads to Madison with Self looking for his fourth victory of the year. As noted, he has a 60-point lead over Holmes, who sits second. Self has a 100-point margin over third place Travis Braden, 130 points over fourth place Christian Eckes and a 170 points over fifth place Joe Graf Jr.

Not only is the top-five points battle heating up, but the battle to finish inside the top-10 is also heating up as well. Tim Richmond and Dick Doheny pushed their way into the top 10 by running at Michigan, but this weekend, those two drivers will have to hold off Chandler Smith and Ty Gibbs, who currently sit 13th and 14th. Despite not being a huge battle, it’s one within the field worth noting.

Self is one of the drivers entered who have never raced at Madison before. His teammates Smith and Eckes have both raced at Madison previously. The Venturini Motorsports organization has a total of four victories at Madison, the most of any other teams. Alex Bowman won the inaugural event in 2011, while Kyle Benjamin and Justin Boston won in 2013 and 2014. Smith earned his first career victory in this race last season. Smith is the only driver to start from the pole and win.

Another driver making his first appearance at Madison will be Gibbs, who will pilot the No. 18 for Joe Gibbs Racing after Riley Herbst took over at the bigger tracks. Gibbs has had a very successful season, finishing second three times. He’s only led one lap this season at Five Flags Speedway, but he has had the speed to go against the Venturini drivers. If Gibbs has his way, it’ll be another Toyota-dominated race ‚ this time though, with him coming out on top.

Sam Mayer returns to the series this weekend at his home track. The Franklin, Wis., native looks to return Chevrolet to victory lane for the first time at Madison since 2016 when Josh Williams did so. Mayer has five career starts in the ARCA and a best finish of second at Salem Speedway earlier this year. He finished fifth in his last start with GMS Racing at Toledo Speedway, and the last time the No. 23 hit the track, Sheldon Creed almost took the victory at Charlotte Motor Speedway.

The No. 22 that has dominated Madison as of late will have rookie Corey Heim back behind the wheel. Heim returns for the first time since Toledo where he finished 10th — of course that was before Majeski started kicking tail in that car. Last weekend’s loss has to have lit a fire under the No. 22 team, and it could lead to Heim earning his first career victory and Ford’s first victory at Madison since 2012.

Much like the other drivers under age 18, Carson Hocevar returns to the series. Hocevar had a string of strong finishes earlier this season, earning three straight top-10 finishes. He started from the pole at Salem, where he earned his best career finish of third. Madison is one track Hocevar has not competed on in the past, but it hasn’t stopped him from performing before. He’d never raced an ARCA car at Salem, but still brought home a third-place finish. Look for the No. 28 car to be a contender the whole race.

Hailie Deegan‘s career in ARCA has been interesting so far, finishing 18th at Toledo after an incident with Graf Jr. and then finishing seventh at Pocono in her superspeedway debut. On Friday, she heads to Madison for the first time behind the wheel of an ARCA car. She just picked up her third career K&N Pro Series West victory this past week after moving her teammate Derek Kraus out of the way on the last lap. Watch for Deegan to do big things Friday night under the lights.

Dale Shearer will look to make his ARCA season debut this weekend behind the wheel of the No. 69 for Kimmel Racing. The ARCA veteran will look to make his 32nd start in the series. He was slated to race in Pensacola in February, but withdrew from the event. In 31 starts, Shearer has a career-best finish of 11th at Springfield in 2016. Also making his return to the series is Eric Caudell. Last seen at Fairgrounds Speedway Nashville, Caudell will make his 38th career start in the series. In his previous 37 starts in the series, he has a career-best finish of 11th at Kansas Speedway last season.