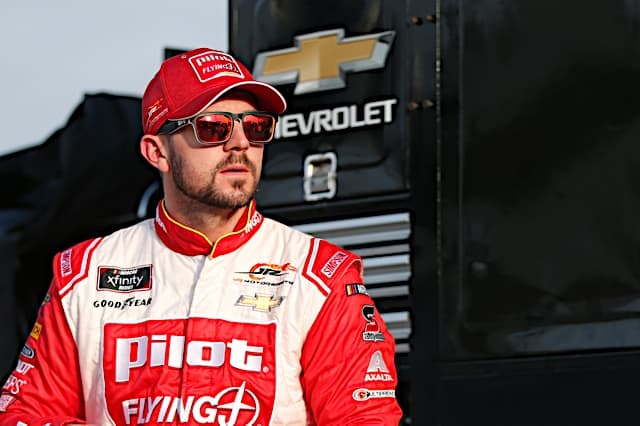 Maybe all it took was a number change and crew chief switch for Michael Annett to win his first race, but whatever the case, he is enjoying a career-rejuvenating year with JR Motorsports in 2019.

Go back to 2018, when Annett, 32, didn’t earn his first top-10 finish until mid-August at Bristol Motor Speedway. Through the opening 13 races of 2019, the same driver has nine such finishes (and there are still nine races until the August Bristol race), including a third-place effort last weekend at Michigan International Speedway.

Annet kicked off the season with a bang, winning his first career NASCAR race at Daytona International Speedway. On that afternoon, the No. 1 car was dominant, leading a single-file parade for 45 laps, just shy of his last five full-time seasons combined at the NASCAR Xfinity Series level (47).

Reflecting on the victory, it helped validate Annett, though the No. 1 team isn’t content.

“It definitely helps to say you’ve won a race in the series,” Annett recently told Frontstretch. “To win at a track other than a superspeedway I think is a true validation. To do that, you’ve got to put a whole weekend together with a good practice, good qualifying and putting a whole race together. That’s going to be the validation to win somewhere other than a superspeedway, but it was definitely a huge confidence builder.”

Since Daytona, Annett has picked up two additional top-five results (fifth at Las Vegas Motor Speedway, third at Michigan), while leading 17 laps. He also scored his first-career pole at Talladega Superspeedway before getting involved in a late-race incident. Through the first four months of the season, he has the fourth best average finishing position in the entire series (9.5), only behind Tyler Reddick (3.9), Chase Briscoe (7.7) and Austin Cindric (8.1)

Annett believes the uptick in performance started away from the track.

“We had a really good offseason as a team,” Annett added. “I really focused on myself to do everything I can to be the best racecar driver I can be. I spent a lot of time at the shop with the guys and really built a relationship with Travis Mack [crew chief].”

Mack came on board as Annett’s crew chief for the final 14 races of 2018 after starting the season as Kasey Kahne’s crew chief at Leavine Family Racing.

“I tell people confidence is a lot more important than a spring change or a sway bar change in our sport,” Annett said. “Once you’ve learned how to run in the top 10 and run more consistently, qualify better, you can repeat that pattern.”

As the regular season has reached the halfway point, Annett wants to earn more playoff points, currently having just the five from his Daytona victory. Surprisingly, he sits ninth in the championship standings, giving himself a “B” grade for the season.

Despite being in the back half of the top 12 in points, Annett’s staying upbeat.

“It’s pretty high,” Annett said of his confidence level. “We need to get back to where we were at the beginning of the year in the first five races of acquiring quite a few stage points. That starts with a good qualifying effort and having a fast racecar. We just need to put a whole weekend together and get those stage points, and top fives come with that.

“We’re just having a lot of fun right now. It’s fun to walk in the shop and be proud to show your face and of what you did the weekend before. I feel like we’re doing our part a little more with the organization as a whole. We’re not just going off everybody else’s notes, they’re coming to look at ours, too.”

Achieving success has required a bit of a mental game for the Iowa native. In the past, Annett would lean heavily on veteran JRM teammates Justin Allgaier and Elliott Sadler, when he drove the No. 1 car. But now he’s one of the team leaders, as the organization welcomed rookie Noah Gragson this year, along with a plethora of drivers filling out the No. 8 car.

Last year, Annett admitted to Frontstretch he was underperforming for JRM. Now, not so much.

“The oldest saying in our sport is once you learn how to win, it becomes easier,” he mentioned. “It’s a lot easier to have a notebook of what you did right and the goal that you achieved rather than guessing of what you need to do to get there.”

On paper, Annett is having the best season of the three JRM drivers, being the only driver to win thus far, and having the best average finishing position (Annett 9.5, Gragson 10.3, Allgaier 11.7). But the driver of the No. 1 car wouldn’t call it a redemption year just yet.

“Ask me in November if it’s a redemption year,” Annett said. “We’re just doing the job at hand weekend-by-weekend. I’m really not looking back on anything right now, just a lot of looking forward to do.

“The sky is the limit. We have everything at our fingertips to go win a championship. This organization has proven that the past two years. We’ve got the cars, we’ve got the people, we’ve got the teammates to rely on. There’s no reason we can’t say we’re going to be part of those [final] four at Homestead [-Miami Speedway].”

The series heads to Annett’s home track Iowa Speedway this Sunday (June 16). In 12 starts at Iowa, the hometown boy has a best finish of fourth, coming in 2012 with Richard Petty Motorsports.