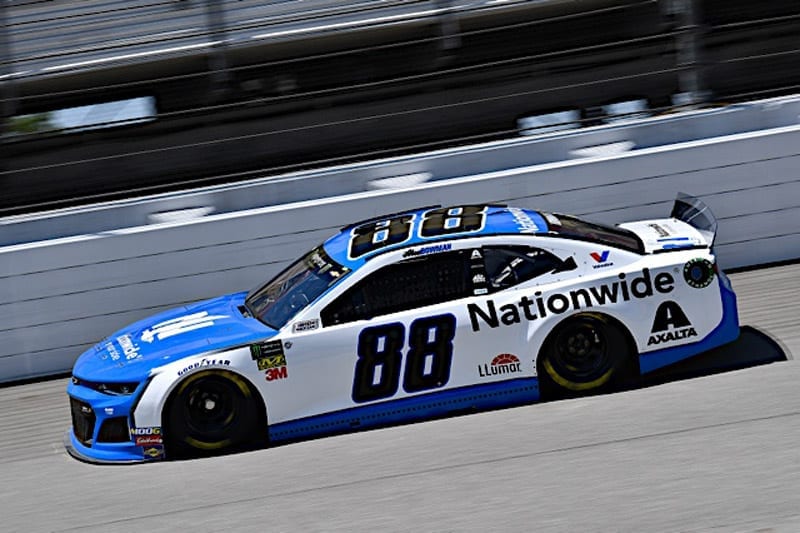 Nationwide Insurance will no longer be a Hendrick Motorsports sponsor after 2019, it was announced Wednesday afternoon (June 12).

The news was first reported by Adam Stern of the Sports Business Journal and Fox Sports’ Bob Pockrass.

Full statement from Nationwide on leaving Hendrick Motorsports after this season. It was scheduled to be primary for 20 races next year. First reported by Adam Stern/SportsBusiness Daily: #nascar pic.twitter.com/JSu2an0Eog

“Since 2015, Nationwide has had the pleasure of being the primary sponsor for the No. 88 team – first with Dale Earnhardt Jr. as the driver and then with Alex Bowman,” Nationwide’s statement read in part.

“As Nationwide’s business needs evolve, we are adjusting our marketing resources to ensure that we are aligning to those new business priorities.”

Earnhardt won three times in Nationwide colors, all in 2015. Jeff Gordon also piloted the Nationwide machine in 2016 while filling in for an injured Earnhardt.

The Ohio-based company was slated to be the primary sponsor of Bowman’s No. 88 Chevrolet Camaro ZL1 for 20 races in 2020.

However, Bowman is still under contract for next season.

Before joining HMS, the company was the title sponsor of the Xfinity Series from 2008-14 and was with Roush Fenway Racing’s No. 17 and Ricky Stenhouse Jr from 2012-14.

Bowman is having the best season of his career so far, with three top fives and five top 10s through 15 races, all coming since Talladega Superspeedway. He is currently 10th in the standings, 67 points inside the cutline, where teammate Jimmie Johnson holds the final playoff position. The No. 88 team is 10th in the MENCS owner standings with 433 points.

Well if you dont win sponsors leave. And it’s not like the chevys are decent in speed

Are they going to try to make Bowman attractive to Ally? It just seems like a Johnson retirement announcement has to be in the works.

I saw a social media post from him that may or may not have been deleted that he said NATIONWIDE wanted him. Sure, Alex…just like your abysmal big boy stats suck and you were going to school Logano. No Big ego, with nothing stat wise to back it up. DALE EARNHART JR. was and is the draw, NOT YOU! Just sayin, check that ego BOO RAD!

nationwide might had wanted bowman when he filled in for jr when he was out half a season. nationwide is still tied to jr, and i imagine their contract was up with hendrick, and since jr is gone, they saw that as a way to take their money and spend it differently.

if not for chase elliott and his tie to mountain dew, i’d say they would stop pushing dollars to na$car. any sponsor that was tied to jr will leave. sponsors knew who the draw was.

Not like any of those guys over and Hendrick have a lot of personality. Outside of Chase I have 0 idea how the other 2 race, in interviews they just seem to be OK with running where they did and reading a script……finished 8th – Our Chevy was great overall today, happy to bring home and 8th place finish bla bla bla….

hendrick – the team owner that started vanilla owners. he only tolerated jr’s not toeing the line cause of the name and amount of merchandise he sold and could bring sponsors just cause of his last name.