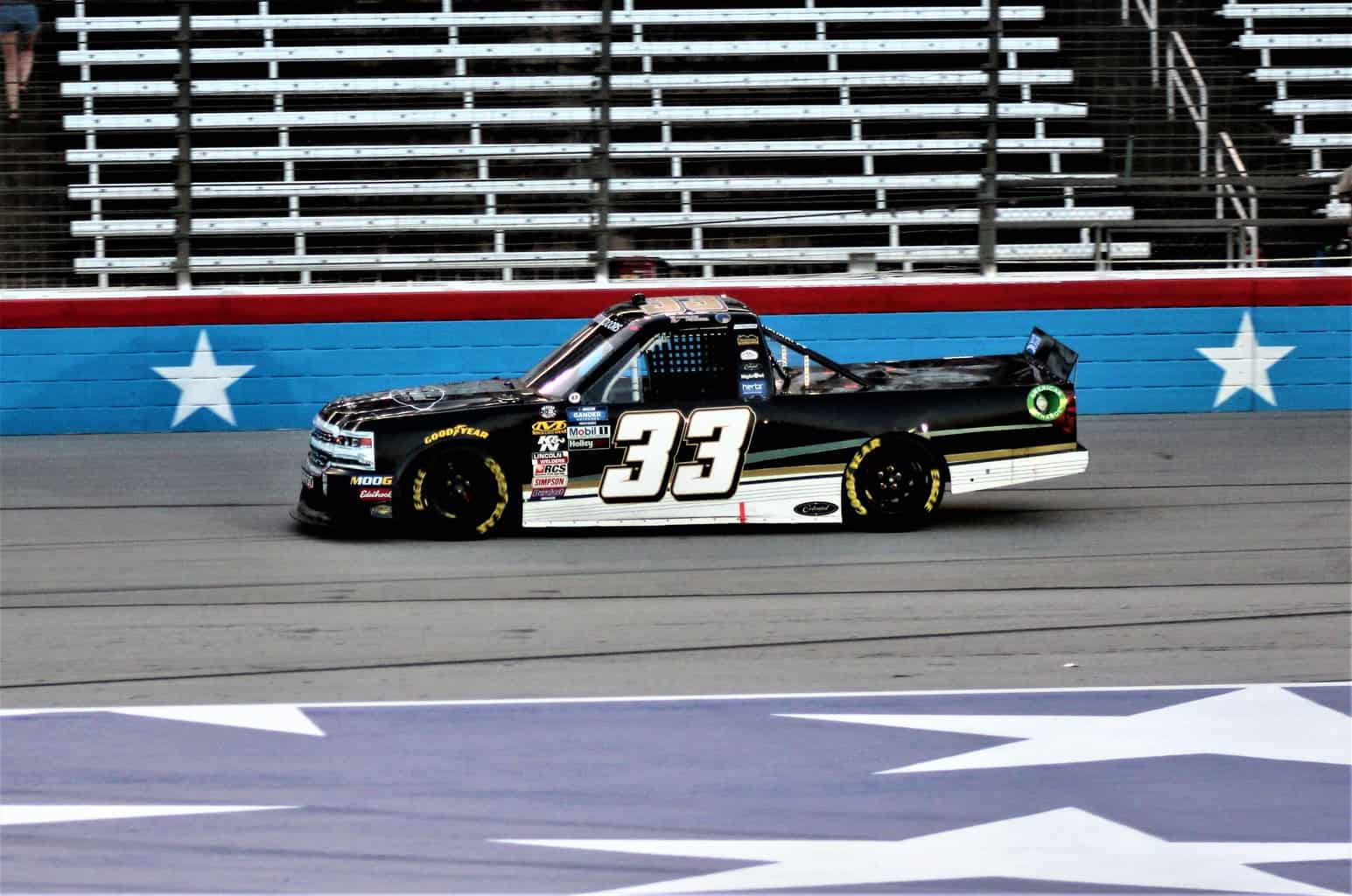 Unless you pay more attention to the Gander Outdoors Truck Series than just the race broadcasts, it’s unlikely you’ve heard those names, or even if you have, you probably don’t know much about them or what makes their race weekends tick.

In fact, as you walk through the Truck Series garage, it’s easy to overlook the Reaume Brothers Racing trailer, as it sits nestled in between the large, multi-million dollar haulers lined up in a row. But it’s hard to miss the hard work the small team puts in each weekend when you open your eyes.

Affectionately known as the African Squirrel, Reaume didn’t take the traditional route to race in NASCAR. Born in California, he moved to Nigeria where he lived for 13 years while his parents performed humanitarian work. Then, his family moved to Canada, where he began racing go-karts, and his career evolved from there.

The 28-year-old made his Truck Series debut in 2013 at Iowa Speedway with SS Greenlight Racing where he finished 25th. Since then, he’s made 33 NASCAR Xfinity Series starts and currently sits at 35 races and counting in the Truck Series.

Jump to 2018 and it was time for a change for the part-time racer. He started the team and missed the season-opener, something he blamed on not having a spec engine during an interview with Frontstretch last February. Reaume ended up running a part-time schedule in the No. 33, but it was part of building a team.

Enter the 2019 season when Reaume once again planned to run full-time. He made his name known when he scored a sixth-place finish in the season-opener at Daytona International Speedway.

But perhaps what was most important about the result was the long-term effect it should have on the organization.

“Daytona was huge for us because it put us on the map with a lot of partners. I think it showed we’re capable of having a good run and having a good finish,” Reaume explained during an interview at Kansas Speedway last month. “It had all the elements to have a good race at Daytona. I think a lot of people maybe think it’s a superspeedway and anything can happen, but we had good funding for the race, so we were able to do all the right things and I think we just played our race smart.”

Despite the result, any true racer at heart – which Reaume definitely is – would want more, especially since the sixth-place run turned out to be a story of what could have been.

“Unless I get closer to winning a race before I retire, I think I’ll always have a little stitch in my side that we ran out of fuel,” Reaume said.

But for RBR, it’s ultimately not a matter of that single race, that single top-10 run. Instead, it’s a part of the bigger picture, which ultimately comes down to sometimes making tough decisions.

“Originally, the intention was to try to run the full season, and we had funding for Daytona,” he said. “There was a bit of a bridge that we were trying to get through. We felt like we had a pretty decent sponsor deal that we were going to be able to land for Dover [International Speedway] because we had that off period where we felt like we’d have the time to lock all of that in.

“When that started to look like it wasn’t going to happen, I had to make some decisions to put some other people in the trucks, some people that had funding. It’s a business before it’s anything for me.”

One of the things RBR has going for it this season is the addition of trucks to the arsenal. The organization now has two superspeedway trucks ready to roll and a third one that’s there just in case something happens at Talladega Superspeedway so it won’t set them back getting ready for the 2020 season.

“I feel like we’re at a point now where we have enough trucks put together and built and we’re organized enough at our shop that we’re getting ahead now in terms of we’re able to do those things that can correlate to speed as opposed to struggling to get things put together and go week to week with damage and everything,” he said. “Now we’re in a position where if we tear something up, we’ve got another truck in the hopper ready to go so we can get a few weeks ahead and start doing more engineering things as far as fine-tuning our setups.”

Of course, the additional trucks also bring that peace of mind to Reaume, the businessman, knowing there’s a backup plan in place, just in case something goes wrong on race day.

“I don’t know what was wrong in my brain, what wasn’t wired properly for me to start this deal because last year, there were so many times where if I had crashed, that would have been it,” he said with a grin. “The turnaround time, there was no way to make it happen. I think back on how hard I raced people with those circumstances in front of me and I don’t know what’s wrong with me that I did that. Obviously, we overcame all that and we have more trucks so that’s a blessing.”

When it comes down to it, Reaume intends for RBR to run for many years to come and noted that “two trucks is a good place to be at.” There are obviously plans for on-track improvement, though there have been some strong runs already for the team.

Solid 18th place finish last night in the @RBR_Teams #34 Silverado. We fought through a bit of adversity throughout the night but we kept our heads down and worked on the car every pit stop. Mega thanks to everyone on the team for their hard work! Can’t wait to do it again. pic.twitter.com/7HaoMA9GgF

While many might scoff at a top 20 being a strong run, for an organization that has just three people working full-time at the shop, it’s a step in the right direction for longevity in the sport. For that matter, so is the ideal long-term business plan for RBR.

“I’d like for the program to get more competitive, but I also don’t want it to get to the point where it’s dependent on mega dollars to survive,” Reaume said. “I think there’s a good niche for our team to be clean cut and professional and reliable and at a price point that makes sense for businesses to come into.

“It’s hard to justify spending $70k to 125k a race, especially in this day and age where our sport is primarily conventional marketing, meaning a 200-mile per hour billboard. For us to be on the lower end of that, but still a lot of times our finishes are bookended by people that are spending that kind of money.

“I think there’s a good niche there. I’d like to stay there if we could — obviously, refine it better and make it cleaner and run better. But I don’t want to get to the point where we need a million dollar sponsor in the offseason or else we shut the doors.”

What I find incredibly fascinating is how honest Reaume is in his marketing presentations. In fact, he’s got a bottom line letter posted on his website that lays out exactly what he has to offer a sponsor, and that transparency is something sorely needed in NASCAR today.

“It’s a big part of why I decided to start a team. I had been on the driver side of things and I’ve had the privilege of driving for a number of different teams,” Reaume explained. “Not that team owners necessarily don’t have integrity or any of that, but I saw it in the sport in general that I wanted to set myself apart and have a higher level of honesty and transparency.

“I’m very thankful to be able to say that a lot of my personal sponsors have been with me for a long, long time,” he continued. “Sometimes the money that they spend fluctuates just because there isn’t an opportunity that necessarily makes sense for their business, and that comes from me — it doesn’t come from them internally. It’s that I scratch your back, you scratch mine; I’m looking out for their best interest that creates that longevity.”

This weekend at Iowa Speedway, the current entry list shows RBR fielding the Nos. 32, 33 and 34 with Daniel Sasnett, C.J. McLaughlin and Mason Massey behind the wheel. Sasnett ran for the organization at Martinsville Speedway, but opted not to run Dover when he was unable to get fitted for the seat ahead of the race.

Meanwhile, McLaughlin is an up-and-coming driver running for Our Motorsports in the ARCA Menard’s Series who will make his series debut this weekend. Additionally, Massey is an accomplished dirt late-model racer who will also make his series debut. All three trucks are planned to run out of the RBR shop.

Of course, you may notice that Reaume is not listed to race one of those three trucks.

“It’s a business and it has to operate as a business and be profitable, but at the end of the day, I want to work with people as best I can so that they keep coming back.”