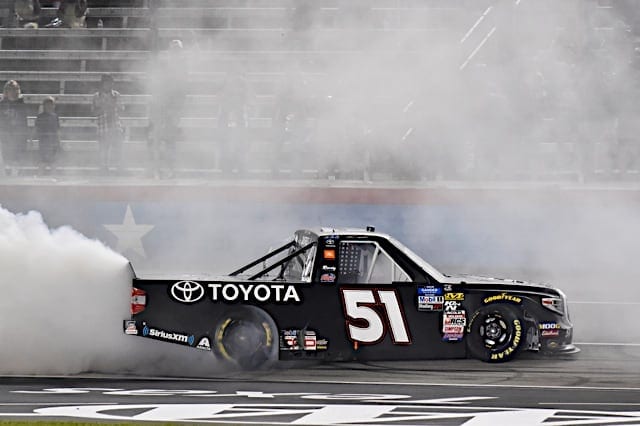 You might think that Greg Biffle, who rolled into victory lane last weekend at Texas Motor Speedway in the NASCAR Gander Outdoors Truck Series, has a case for the longest time spent out of the winner’s circle in the series’ history.

It all depends on what value you use. In March 2018, for instance, this space ran a story that listed the 10 longest streaks between wins in Monster Energy NASCAR Cup Series history, commemorating Clint Bowyer‘s Martinsville Speedway win that month that snapped a 190-race winless drought.

Bowyer placed third on the all-time list there, with Bill Elliott’s 226-race streak the series record.

Biffle, however, would not come close to a ranking like that in the Truck Series. That list took into account individual starts between wins, meaning that the number went up only when a given driver competed in a Cup race. In the Cup Series, that’s generally a good marker to use, as many of its winners end up running full time on the circuit until they’re past their prime and no longer winning anyway.

The Truck Series is tougher. At Texas, Biffle won for what was the first time since 2004 in the series in which he won the 2000 championship. But his winless streak had only been at one race entering Texas, despite the 15-year period of inactivity. After winning in his final two starts of the season in 2001, Biffle competed in one race, the 2004 season-ending event at Homestead-Miami Speedway, in between then and his return to the series with Kyle Busch Motorsports last week.

And that’s not necessarily irregular. Occasionally, a driver who came up through the series, such as Biffle, might move up to the upper national series and only compete sporadically in the Truck Series from then on. Hence, in theory, you get more of these multi-year droughts that only actually amount to maybe a winless start or two.

A quick gander at Truck Series history indicates that, yeah, that actually has been the case a few times, that Biffle’s situation was no fluke.

The best thing about Kahne making this list is that his inclusion contains the same caveat than Biffle’s. As in: hey, you know how Biffle technically only ran one race in between Truck Series wins? So did Kahne, who finished second at Pocono Raceway in 2010, his only start between his 2004 victory at Homestead and his 2011 triumph at Darlington Raceway. To date, it’s the only time Kahne didn’t win a Truck race.

Mike Skinner’s name is synonymous with the Truck Series as one of the circuit’s original stars and its inaugural champion. A pair of eight-win seasons to kick off his career was the impetus for his move into the Cup Series, where he never quite found the success that made him so tough to beat in a truck. So it was probably a matter of time before he came back down to the series that made his name and won again — and win he did, though it still took nine years and an entire full-time season in 2004 before he did so.

Like many Cup stars at the time, Martin was drawn to the Truck Series upon its debut, competing in a pair of races for his Cup team during the 1996 season, winning once at North Wilkesboro Speedway and finishing third in his debut at Richmond Raceway. But Martin’s curiosity seemed to wane rather quickly, as he didn’t return to the series until 2005. His part-time schedule in 2006 amid his first retirement tour from NASCAR was what begot the win that snapped his decade-long break from victory lane in the series; that year he won six total in just 14 starts.

A trio of full-time runs at the championship from 1998 to 2000 would have been the marks of note for Wallace in the Truck Series had it not been for a one-off run with Kevin Harvick Inc. at Talladega Superspeedway in 2011. Wallace, known for many years as a driver who could prop up even the most shoestring budget-driven teams at the superspeedways, got a chance in elite equipment — and he led 54 laps en route to his first win in the series in over a decade. He hasn’t competed in the series since.

Yep, Biffle’s win last weekend ends up leading this list by a wide, wide margin. But again, look at it this way: like Kahne before him, it wasn’t so much that the former champion was losing races, he simply wasn’t competing in them, going AWOL after the 2001 season aside from the single 2004 start in the season finale. Still, the win showcased why Biffle is one of the better drivers ever to step into a truck in NASCAR competition — even if he did it in prime equipment, Kyle Busch Motorsports’ No. 51.