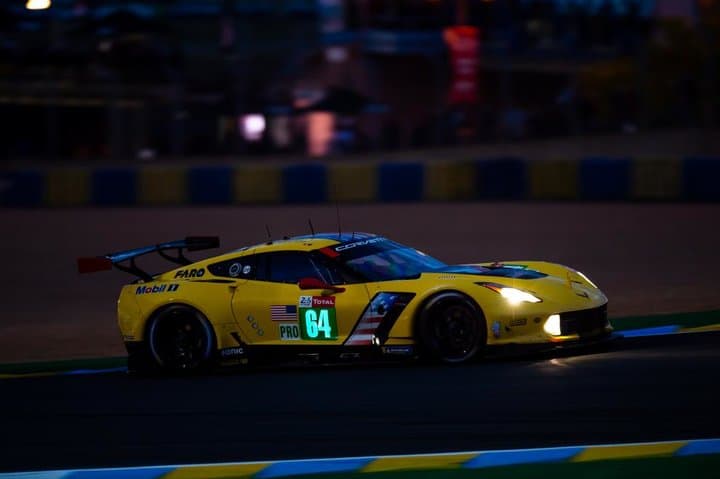 Through six hours at the Circuit de la Sarthe, Toyota GAZOO Racing has dominated the competition at the 2019 24 Hours of Le Mans.  Mike Conway led the field away from the drop of the French Tricolore and effectively has not been usurped.  In an in-race interview, Fernando Alonso noted that the No. 8 Toyota has seen a change in handling characteristics for the worse since the warm-up session Saturday morning (June 15).

The No. 7 team was able to expand the lead over its sister car to over a minute at one point.  A couple of safety car periods have cut into the advantage, though and the race is far from over.

As for the non-hybrids, they were unable to pose any kind of a challenge to the Toyotas.  Rebellion Racing’s Gustavo Menezes tried to challenge the No. 8 Toyota on the first lap, but could not get past.  Once the tires were up to temperature, the Toyotas were gone.  The non-hybrids then dropped away from the leaders at a pace of multiple seconds per lap.  Within an hour, the third-place LMP1 car was 35 seconds behind.

At the six-hour mark, the No. 7 Toyota with Conway at the wheel was leading the No. 8 by 42 seconds.  Rebellion Racing’s No. 3 for Thomas Laurent was more than a lap down in third.  Shortly after the six-hour mark, Laurent spun under braking for the second chicane on the Mulsanne straight and went nose-first into the wall.  The Rebellion Racing team made very quick repairs and got him back out with a minimal loss of time.

SMP Racing’s No. 11 was right behind in fourth, while the team’s No. 17 was three seconds further back in fifth.  Rebellion’s No. 1 was sixth, three laps down after an early spin and a short garage visit.

At the six-hour mark, Signatech Alpine Matmut’s Alpine A470-Gibson was leading the class in seventh overall, four laps down to the No. 7 Toyota.  Their advantage over the No. 26 G-Drive Racing Aurus 01 was just shy of six seconds.  DragonSpeed’s No. 31 ORECA 07-Gibson that was fastest in class in the first two qualifying practices is third, followed by Jackie Chan DC Racing’s No. 38.  United Autosports’ No. 22 was fifth, best of the non-ORECA 07s.  Seven cars are currently on the lead lap in class.

GTE-Pro saw a pre-race Balance of Performance adjustment made to the pole-winning Aston Martin Vantage.  They lost a small amount of turbo boost all the way up the power band.  While this move hurt the team’s pace, a lack of proper handling hurt it more.  Nicki Thiim was able to lead early on, but Corvette Racing’s Antonio Garcia was able to sneak by a few laps into the race and pull away.  At present time, both Aston Martins are a lap down and running 13th and 14th in class.

Much like the GT Le Mans class in the IMSA WeatherTech SportsCar Championship, the GTE-Pro race to this point has been marked by close racing and battles for position.

There is only one of the 61 starters out of the race at this point, but it was a big one.  Just before the six-hour mark, Corvette Racing’s Marcel Fässler was caught out in the Porsche Curves.  Contact was made with the No. 88 Porsche, causing this big crash.

Unlike IMSA, if you cannot drive your car back to the pits yourself after crashing, then you are out on the spot.  An allowance is made if you get stuck in a trap.  The No. 64 Corvette was immobile after the crash.  Race over.

At the six-hour mark, Porsche GT Team’s No. 92 was leading the class in 27th overall, in position to defend their victory from last year.  They were three seconds ahead of AF Corse’s No. 51 Ferrari.  Corvette Racing’s No. 63, which will have to uphold the team’s honor from here, was third.  Porsche GT Team’s No. 93 (the No. 911 in IMSA) was fourth, while Ford Chip Ganassi Racing WEC’s No. 67 Ford GT was fifth.  Nine cars are currently on the lead lap.

In GTE-Am, Dempsey-Proton Racing started one-two and looked to have the pace to make a mockery of the race.  Not so fast.  The trouble started early for the pole-winning No. 88 as Matteo Cairoli spun on the run to Indianapolis.  Cairoli was able to continue, but not without a little damage.  A lost headlight and additional front-end damage resulted in a stint in the garage.  Later on, the No. 88 crashed with the No. 64 Corvette, resulting in another trip to the garage.  As of this writing, the No. 88 is still getting repaired and is back at the rear of the field.

A number of teams have shown strength on Saturday.  Spirit of Race was very fast early on with Giancarlo Fisichella in the car.  But teammate Francesco Castellacci spun the car in the Porsche Curves and got stuck in the gravel, bringing out a full course yellow.

With trouble striking the favorites, Keating Motorsports’ Wynn’s-sponsored Ford GT inherited the class lead at the six-hour mark.  By virtue of safety car periods, Jeroen Bleekemolen was able to get a substantial advantage on the rest of the class.  Bleekemolen’s lead was nearly three minutes over the JMW Motorsport Ferrari with a driving squad straight out of Blancpain GT World Challenge America (TR3 Racing teammates Jeff Segal and Wei Lu, along with K-PAX Racing’s Rodrigo Baptista).  Team Project 1’s Porsche was third, followed by TF Sport’s Aston Martin Vantage.  The No. 77 Dempsey-Proton Racing Porsche was fifth.

Live coverage of the 24 Hours of Le Mans continues on Motor Trend.  Those of you with Motor Trend OnDemand can view live in-car cameras on that service as well.