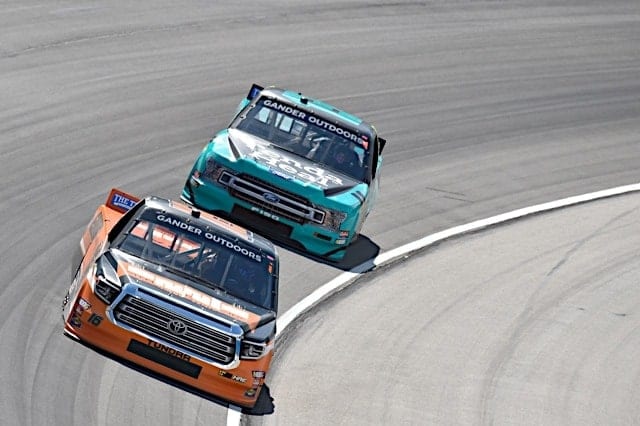 Johnny Sauter and Austin Hill battled each other hard for several laps in the NASCAR Gander Outdoors Truck Series’ M&M’s 200 at Iowa Speedway. But after a little contact back and forth, Hill decided he had enough.

Sauter and Hill were battling for seventh position on Sunday (June 16) just ahead of Sheldon Creed. Both drivers raced hard for the spot as Sauter made contact with Hill entering turn 1.

The incident got both trucks loose, Hill going high and Sauter low. But each driver saved their truck and things appeared to settle down between the two.

Less than two laps later, FOX Sports cameras cut to Sauter on lap 139 as his No. 13 Tenda Ford backed into the turn 4 wall, replays showing Hill as the culprit.

Sauter then hunted Hill down under caution, sending the No. 16 ARCO National Construction Toyota into the wall and around, further damaging both trucks in the process.

NASCAR then parked Sauter for the remainder of the race. He’s been invited to the hauler for further discussion; no additional penalties have been announced. Hill, meanwhile, conveyed a message through his crew chief, Scott Zipadelli, that Sauter forced the issue between them before speaking after the race.

“It’s hard racing that guy,” Hill said after finishing 13th. “We were racing hard getting into turn 1. He got into me a little bit, and I kind of returned the favor.

“I don’t race like that. If you’re going to try to take me out, I’m not going to put up with that. I guess he was mad from Texas last week [where the two drivers made contact]. I don’t know.

“We’ll just move on. I have better things to worry about than the No. 13 truck. I’m just focused on the championship. If we wants to come talk to me about it, he can, but it won’t be nice words.”

Approached for an interview afterwards, Sauter ignored the microphones clustered around him, not saying a word as he emerged from the infield care center.

This is typical road rage incident. The instigator never gets the blame, only the reactor.
Why this went so far? Johnny is a good enough driver to make you loose without wrecking you. Austin Hill doesn’t have that finesse, he just wrecks you.
No excuse for Sauter to do what he did though under the caution flag. That should be a race suspension.