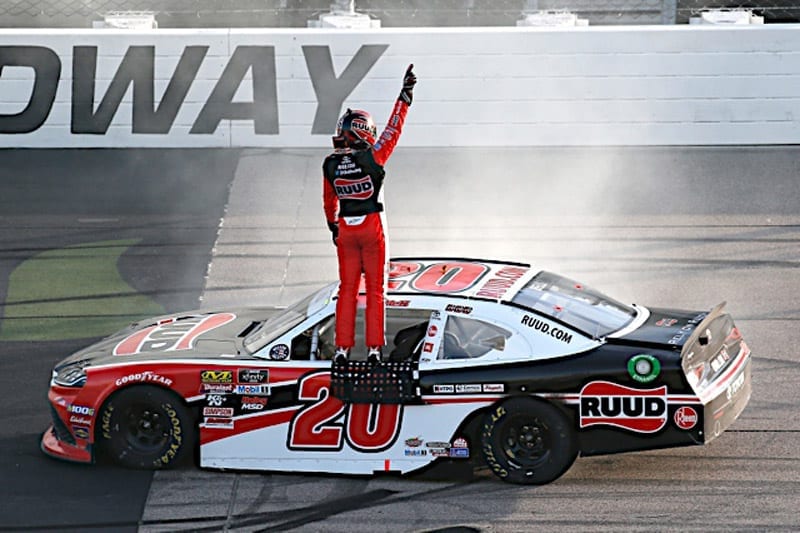 Christopher Bell had some uncharacteristic results coming into the CircuitCity.com 250, including two finishes outside the top 10 in the previous three races. But he’s always been tough to beat on short tracks, and that was once again the case at Iowa Speedway on Father’s Day.

Bell led 186 of the 250 laps and swept all three stages at Iowa, recording his fourth victory of the 2019 NASCAR Xfinity Series season. The win broke the tie between Bell and his two biggest rivals, including Cole Custer, who came home second. Justin Allgaier, the defending race winner, ended up third, with Harrison Burton, Zane Smith, Noah Gragson, Chase Briscoe, John Hunter Nemechek, Michael Annett and Austin Cindric composing the remainder of the top 10.

“Man, I got the win at Dover on Mother’s Day weekend, or I guess the weekend before with my mom there, and now I just won on Father’s Day weekend with my dad here, so it was pretty special,” Bell said.

Custer had a car strong enough at times to look like he might challenge for the win, and led 60 laps early on after starting the race on the pole. But he had to fight back from the inside lane on nearly every restart, and Bell was able to use the outside lane to his advantage to prevail each time.

The exception came when Custer barely beat Bell off pit road during the race’s sixth caution, putting his No. 00 Ford on the outside with with 28 laps to go. However, Bell caught him quickly and retook the lead, with the two cars making contact as they jostled for position. One final yellow flag flew after Chad Finchum got into the wall and set up a restart with only 10 laps remaining, but Bell was on the outside for that one and never really under pressure down the stretch.

It was a much different story for the other member of the 2019 Xfinity Series Big Three, Tyler Reddick. Though he entered the CircuitCity.com 250 on a streak of 10 consecutive top-10 finishes, Reddick and his No. 2 Chevrolet had misfortune strike right before the end of the first stage in the form of a flat tire. Reddick attempted to limp his car around to the stage break, but was eventually forced to pit under green, losing laps in the process. He never quite got the cautions to fall his way the rest of the afternoon, ending up a lap down in 15th, his worst finish of the 2019 season to date.

Bell’s victory was his second straight at Iowa Speedway, as he also took the checkered flag at the U.S. Cellular 250 last July — though he had to survive two overtimes to earn that one. With another stop at the track looming just six weeks away, Bell and his No. 20 team have to already be circling that date on their calendars, knowing they can likely use it to right the ship should things go awry between now and then.