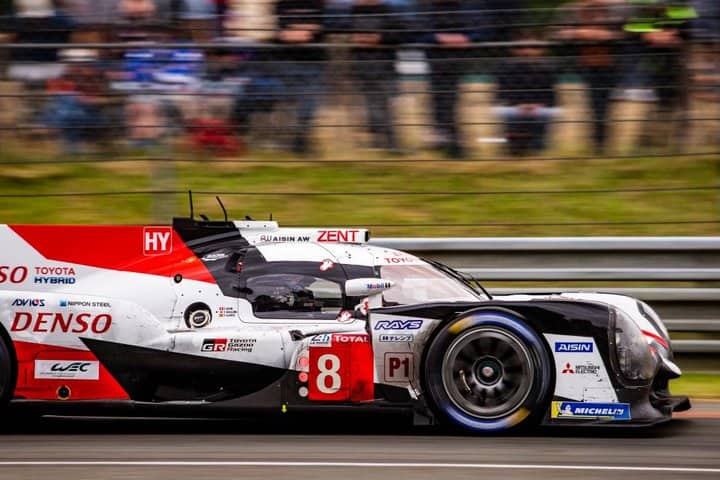 Toyota GAZOO Racing’s No. 7 completely dominated the 2019 24 Hours of Le Mans, leading for 23 of 24 hours. But with a little more than an hour to go, the No. 7 Toyota with Jose Maria Lopez at the wheel got punctures on two consecutive laps, handing the victory to their Toyota teammates.

Those two unscheduled stops, plus a regularly scheduled one two laps before the punctures meant that the No. 8 Toyota shared by Sebastien Buemi, Fernando Alonso and Kazuki Nakajima went from nearly 110 seconds behind to more than a minute in front of the field.  From there, Lopez ran as hard as he could, but Nakajima was able to hold on to take the second straight Le Mans victory for Toyota.  By virtue of the victory, Buemi, Alonso and Nakajima also claimed the 2018-19 FIA World Endurance LMP1 Championship.

“It is an amazing feeling,” Alonso said after the race.  “It was the goal this weekend to get the championship.  Obviously, the race was not [ours to win] today.  The No. 7 was quicker than us for 24 hours.  They really deserved the victory, but today, luck decided that we have to take the trophy.

“Maybe we don’t deserve it, but we’ll take it.”

The final margin of victory was 16.972 seconds over the dominant No. 7 Toyota of Lopez, Mike Conway and Kamui Kobayashi.  SMP Racing’s No. 11 BR Engineering BR1 was third overall, six laps behind the winners with the trio of Mikhail Aleshin, Vitaly Petrov and Stoffel Vandoorne.  Rebellion Racing’s R13s were fourth and fifth after a trouble-filled race.  These were the only five LMP1 cars to finish.

In LMP2, the race ended up being a three-team race for much of the event between G-Drive Racing, DragonSpeed and Signatech Alpine Matmut.  The two teams alternated the class lead until the starter motor decided to die on G-Drive Racing in the 19th hour.  As Rebellion Racing discovered in 2017, you cannot punch a hole in the bodywork so that someone can strike the starter in this situation.  Instead, the team was forced to go into the garage for a 20-minute stay to replace the starter.  The garage stay took the team out of contention.  Despite having Jean-Eric Vergne, one of the quickest drivers in the class as part of the team, G-Drive Racing finished five laps down in sixth.

For DragonSpeed, they weren’t even around at the finish.  Pastor Maldonado spun the car at Tertre Rouge and went nose-first into the tires early in the 17th hour.  The No. 31 ORECA 07-Gibson was out on the spot.

With G-Drive and DragonSpeed out of the hunt, the Signatech Alpine Matmut team was able to pull away and take an easy win in their Alpine A470-Gibson.  The class victory also gives the trio of Nicolas Lapierre, Andre Negrao and Pierre Thiriet the Endurance Trophy for LMP2 drivers, the season-long WEC LMP2 championship.

The margin of victory was officially one lap for Signatech Alpine Matmut over the No. 38 Jackie Chan DC Racing ORECA 07-Gibson of Ho-Pin Tung, Gabriel Aubry and Stephane Richelmi.  They were actually on the lead lap at the finish, but the No. 36 was ahead of the overall winners on the final lap, while the No. 38 was not.

TDS Racing’s No. 28 for Loic Duval, Matthieu Vaxiviere and Francois Perrodo were two laps down in third, followed by United Autosports’ Filipe Albuquerque, Phil Hanson and Paul Di Resta in the best Ligier in the field.  Idec Sport’s Paul-Loup Chatin, Paul Lafargue and Memo Rojas were four laps down in fifth.

Aston Martin’s Nicki Thiim started on pole, but it didn’t take long for his Vantage to drop down the order.  Corvette Racing showed the way early on with their No. 63 Chevrolet Corvette C7.R in what will probably be the car’s final race at Le Mans.  The No. 64 didn’t fare so well as Marcel Fässler came together with the No. 88 Dempsey-Proton Racing Porsche driven by Satoshi Hoshino.  A hard crash into the concrete wall, then the Tec-Pro Barrier ended their day.  To make matters worse, Fässler was found to be responsible for his own crash by the stewards and fined.

For much of the race, the battle for the win was between AF Corse’s No. 51 Ferrari, the aforementioned No. 63 Corvette and Porsche GT Team’s No. 92.  For Corvette Racing, their charge was derailed after Antonio Garcia went off-course during the 21st hour.  That led to two 10-minute pit stops for repairs.  Later on, a lower control arm issue put the car back in the garage for another 15 minutes.  Those issues dropped the No. 63 to a ninth-place finish, five laps down.

The No. 92 was in contention up until exhaust issues struck in the 13th hour.  A 24-minute stay in the garage ruined the team’s chances at defending their class victory from 2018.  The team was relegated to a 10th-place finish in class as a result.  Laurens Vanthoor was crushed.

Ouch.. Broken exhaust ended our victory chance. Hard to accept.. We were in the lead and our car was a rocket. This will take a while to forget…

Despite the exhaust failure, Vanthoor’s teammates Michael Christensen and Kevin Estre had already clinched the World Endurance GTE Drivers’ Championship at Spa back in May.  They still walked out of Le Mans as champs.

With their primary competition out of the way, the Ferrari of Alessandro Pier Guidi, James Calado and Daniel Serra pulled away to take the class victory.  For 2017 GTE champions Pier Guidi and Calado, it was a good way to cap off their championship defense.

AF Corse’s margin of victory was 49.193 seconds over Porsche GT Team’s No. 91 of Gianmaria Bruni, Richard Lietz and Frédéric Makowiecki.  The No. 93 Porsche of Patrick Pilet, Earl Bamber and Nick Tandy was third.  Ford Chip Ganassi Racing IMSA’s No. 68 for Sebastien Bourdais, Dirk Müller and Joey Hand was fourth, more than two minutes behind.  The No. 67 Ford Chip Ganassi Racing WEC entry with Jonathan Bomarito, Harry Tincknell and Andy Priaulx in their final start together were fifth, last car on the lead lap in the class.

Early safety car periods skewed the GTE-Am class battle.  Keating Motorsports entered the race thinking that they were going to be down on speed to the Ferraris.  They qualified mid-pack and ran decently early on, but didn’t set the world on fire.

Pit strategy put the team in the class lead during the fifth hour.  Then, one hour later, the class was thrown upside down due to a safety car period after former Continental Tire SportsCar Challenge champion John Farano crashed the RLR MSport LMP2 class ORECA 07-Gibson at Tertre Rouge.

Jeroen Bleekemolen just so happened to be in front of the overall leaders while the rest of the GTE-Am frontrunners were not at the time.  As a result, the Keating Motorsports Ford GT came out of the safety car period with a three -minute lead.

The team was able to hold on to that advantage.  However, with just under two hours to go, team owner Ben Keating did something that is normal in IMSA.  He spun the tires leaving his pit stall.  That’s forbidden in the WEC.  The stewards hit the team with a stop-and-go penalty for what they see as a breach of safety.

Despite the penalty, Keating Motorsports was able to hold on to the class lead and take the victory.  The trio of Bleekemolen, Keating and Felipe Fraga ended up 44.943 seconds ahead of the Porsche of Team Project 1’s Jörg Bergmeister, Patrick Lindsey and Egidio Perfetti.  The second-place effort was good enough to earn Team Project 1 the GTE-Am championship, an unexpected accomplishment given the success of Dempsey-Proton Racing.

JMW Motorsports’ Rodrigo Baptista, Wei Lu and Jeff Segal were third in class, nearly a minute and a half behind.  Scuderia Corsa’s Cooper MacNeil, Toni Vilander and Rob Smith were fourth, while Dempsey-Proton Racing’s No. 77 Porsche for Matt Campbell, Julien Andlauer and Christian Ried were fifth.

With that, the 2018-19 FIA World Endurance Championship Superseason is now complete after 13 months.  The 2019-20 season starts Sep. 1 at Silverstone Circuit in England.