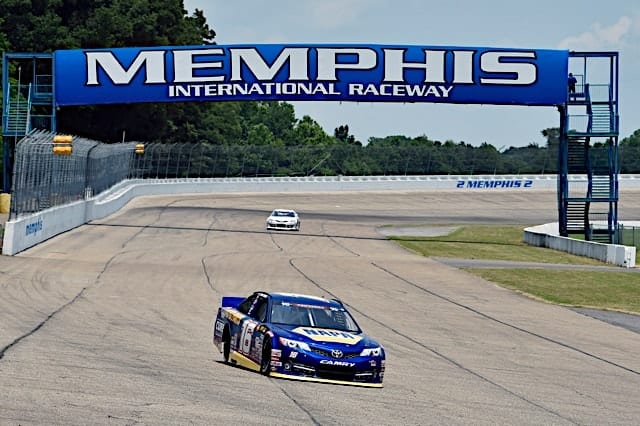 Sunday’s race at Iowa Speedway marks one of the last of the oval stand-alone events on the NASCAR circuit. The NASCAR Xfinity and Gander Outdoors Truck series both formerly had tracks that featured their own identity.

The two series visited places that would fill the void for that area’s lack of NASCAR. Iowa is the last of a dying breed in NASCAR and it’s no one’s fault. Kentucky grew up to become a track on the Monster Energy NASCAR Cup Series circuit. But that is the only one from the standalone era that made it to the cup series.

Iowa’s days as a stand-alone track are also diminishing but it’s a good thing for residents of Iowa. The mumbling of Cup racing heading to Iowa is getting louder and louder and by 2021, Cup may just make it to Iowa. When and if that happens, Gateway will be the last remaining oval standalone event. This got us thinking: What five tracks that used to be standalone tracks, that are still standing, would be best to return?

Memphis International Raceway hosted NASCAR Xfinity and Gander Outdoors Truck series races from 1998-2009. The track produced solid racing in an area where there aren’t very many NASCAR tracks. MIR is located in Millington, Tennessee, just 16 miles away from downtown Memphis. Much like some of the other tracks on this list, Memphis was booted from the schedule to make room for more companion races on the circuit.

The NASCAR K&N Pro Series East made its debut at Memphis in 2017 and held races there the last three seasons. Tim Packman took over as track president on Nov. 7, 2018. He was a communications executive in NASCAR, along with working as the director of corporate communications at Richard Childress Racing.

Of this list, Memphis is the only track that currently hosts at least one NASCAR sanctioned event a season. With the interest in the K&N Pro Series, the Truck and Xfinity series could find a new home at Memphis sometime soon.

Debuting in 1984, the Xfinity Series went to Milwaukee. The trucks debuted in 1995 and both series held annual events at the track up to 2009. The only time NASCAR visits Wisconsin is with the Xfinity Series at Road America in Elkhart Lake, Wisconsin. Many believed the famed track in Wisconsin was the next to rot away and never be seen again but this weekend, life springs out of the historic race track.

The ARCA Midwest Tour Super Late Models become the first series’ to run at Milwaukee since the NTT IndyCar Series raced there in 2015. Track Enterprises is overseeing this process, the same group that oversees the ARCA Menard’s Series at Fairgrounds Speedway in Nashville, Lucas Oil Raceway in Indianapolis, Five Flags Speedway in Pensacola, FL. and many other racetracks across the country.

Track Enterprises has done an excellent job in putting some of these tracks back on the map and giving them a second chance to see big races again. With that combination, we could see a return to Milwaukee Mile very soon.

Frontstretch has been in discussions with staff that currently work at the Nashville Superspeedway over the last two months and those officials confirmed that after much speculation, the track isn’t currently going to be demolished. The developments that have been spoken about have and are currently being constructed within a safe distance from the Nashville Superspeedway, behind the backstretch. The facility is currently being used as a storage facility for brand new Nissan cars as the Nissan plant is just under 15 miles away in Smyrna, Tennessee.

The track hosted both the Xfinity and Truck series from 2001 to 2011. For the longest time, NASCAR visited Nashville twice a year but much like Memphis, Nashville was pushed to the side to make room for more companion events and the track ultimately didn’t return in 2012. Since the track has been up for sale and sold multiple times. Despite not seeing competitive racing in almost 10 years, the track is still being used for the Rusty Wallace Racing Experience.

We have a lacking of tracks in the upper west coast. NASCAR used to visit Pikes Peak International Raceway from 1998 to 2005. NASCAR left in 2005 and so did the NTT IndyCar Series. In 2006, International Speedway Corporation sold the track. It returned to being used in 2008 but none of the series seen above ever returned.

The track is currently used in multiple different forms including for drifting and drag racing events along with a music festival type event in September.

If NASCAR ever returned to PPIR, it would knock out two birds with one stone. The fact that the series is lacking with racing in that part of the country and the lack of stand-alone races could be a perfect mixture.

Rockingham used to be a gem in the Monster Energy NASCAR Cup Series but the series moved away from tracks like that to make room for some tracks to earn a second race. Rockingham was pushed off the Cup Series schedule in 2005 and ever since the track has been on a roller coaster ride. It hosted stand-alone Truck races in 2012 and 2013 along with a NASCAR K&N Pro Series East event in 2012 won by 2018 Xfinity Series champion Tyler Reddick.

Ever since though, rumblings about a return to Rockingham has gotten louder and louder and what better way to kick off the return than with a stand-alone event. This may be the unpopular opinion but keep Rockingham as a stand-alone event with ARCA, Trucks, and Xfinity. Let the younger drivers crunch their teeth on a legendary race track and on top of that, it would promote some of the Cup regulars to designate this race as one of their starts during the season.

I’d like to see Rockingham do exactly what Kentucky did, earn a Cup race.

Nice list but would add IRP just west of Indianapolis. Busch and Trucks ran spectacular races there for years until the bzf bonehead brigade sent Busch to Indianapolis Motor Speedway.; not sure where the truck date went. Also would keep the Fairgrounds instead of the newer Nashville Speedway but I’m old and sentimental…

I loved Indy Cars on the Milwaukee Mile, but I don’t think Milwaukee’s ever produced very good stock car racing, probably because of it’s flat turns.

Another great track that held both Busch (Xfinity) and truck stand alone races, was the old 1 mile Nazareth Speedway. Nazareth was fast and produced some great racing. 15 years after deing shut down by International Speedway Corp, the track still exists, but in very poor condition. Unfortunately, Nazareth is just another thing, on the long list of things, that the Brian France has screwed up. ISC sold the track to a developer in 2015, with a clause in the sales contract stipulating that the track could never be used as a race track again!

Instead of Pikes Peak, how about Evergreen Speedway in Monroe, WA? I saw on NASCAR on Reddit awhile ago that track officials are upgrading the track in an effort to attract a NASCAR race there. The only constant issue will be the haul for teams. Charlotte, NC to Monroe, WA is an incredibly long drive. There has to be a substantial purse to cover teams travel expenses.
The Milwaukee Mile probably would serve as a better track for the ARCA Menards Series than Chicagoland Speedway, & I say that despite Chicagoland Speedway being 40 minutes from my home. Idk about the conditions of it though.

I too agree with Mike. Bring back IRP, or Lucas Oil Raceway as its known now, for the Xfinity Series. That race weekend should be Truck Series at Eldora Speedway on Thursday, ARCA & Xfinity at Lucas Oil Raceway on Friday & Saturday, respectively, & Cup Series at Brickyard on Sunday.

Agreed, I think when making the list closeness to other facility is one of the things that needs to be considered. I think the five on the list would do well for each of their series especially tracks like Memphis and Nashville Superspeedway. Personally I think a lot of these second companion events could be replaced with some of these tracks such as replace one of Bristol Xfinity races with Memphis, One of Iowa Xfinity race with IRP. You could replace one of Texas truck races with a stop at Nashville and companion that with Trucks. And also why not run doubleheaders at these races to?

The only reason Kentucky got a cup race is because Bruton Smith bought the track. Remember the former owners even sued Nascar / ISC/France for being a monopoly. And even Ray Charles could see that Nascar is but they lost the case.
These tracks that are listed will probably never get anything better than a truck race if even that much. Nascar is business first and a sport second. The only real revenue the sport has been making the past few years is from TV revenue. Nascar/France is not going to hand revenue to tracks they do not own.
Instead of writing these pie in the sky articles about things that won’t happen. Why not be real journalists and write hard hitting in depth articles about the state of the sport. But if those articles were written Nascar would take Frontstretch’s hard cards. Just ask your colleague Matt McLaughlin what happens when you get on the France family s*** list.

pretty much sums it up, although I wonder how many “fans” really care about the condition of the sport. And I wonder if you took out all the articles about some team getting a three race sponsorship would there be anything written about Nascar at all anyway.