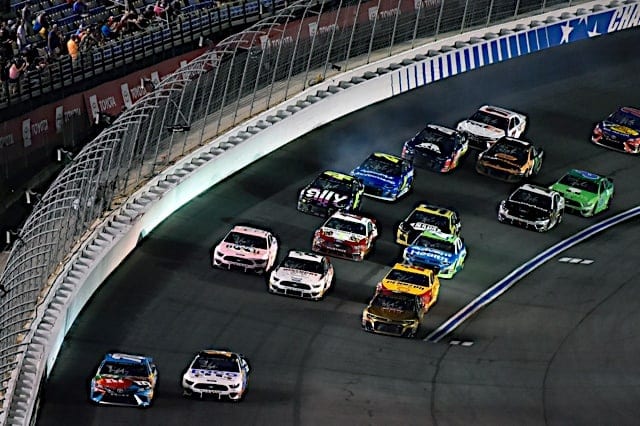 With 11 races to go until the playoffs begin for the Monster Energy NASCAR Cup Series, several drivers have emerged as strong championship contenders.  Kyle Busch, Brad Keselowski, Martin Truex Jr., Joey Logano and Denny Hamlin have each won multiple races in 2019.  They also occupy five of the top seven positions in the standings.

But which driver is best prepared for the playoffs at this point in the season?

So far, the aforementioned drivers are the only competitors who have accumulated more than 10 playoff points. These are the bonus points that will roll over to different rounds of the postseason.  Busch has banked the most playoff points with 25, followed by Keselowski (19), Truex (17), Logano (16) and Hamlin (11).

Since NASCAR implemented the current variation of the playoffs in 2017, it has been typical to see top contenders begin to separate themselves from the pack around this time of year.  Truex, for instance, had already compiled 20 playoff points at this time two years ago.  Keselowski, Jimmie Johnson and Kyle Larson were the only other drivers who had double-digit playoff points.  Truex was clearly establishing himself as a title favorite, topping the points standings at the end of the regular season and eventually winning the title.

On the other hand, playoff points may give us clues about who will reach the championship race, but not the actual champion himself.  In 2018, Busch and Kevin Harvick had a leg up on everyone in terms of playoff points.  Harvick had 26 through 15 races, and Busch was right behind him with 25.  Everybody else had no more than half of Harvick’s total.  Logano, the eventual champ, only had seven playoff points at this time last year.

One common thread between these two seasons is how the front runners increased their playoff points gaps on the rest of the playoff field during the summer.  Truex picked up another 18 points through race wins and stage wins, plus a 15-point bonus for being first in points at the conclusion of the regular season.  That brought his final total up to 53 playoff points.

Compare that to Johnson, who gained only two more playoff points in the same 11-race stretch. Even Larson, who began the postseason with the second-most playoff points, had 20 points less than Truex once the field was reset.  Busch was third, four points behind Larson.

Last year, Busch and Harvick battled all through the summer to pick up as many playoff points as they could.  Busch won the regular season, but both drivers began the playoffs with 50 points each.  Truex carried 35 points into the playoffs, and nobody else broke the 20-point threshold.  Logano was lurking near the middle of the pack with 14 playoff points.

Of the three drivers who have started the playoffs in the 30-point group, two successfully reached the championship race: Busch in ’17 and Truex in ’18.  The less than 20 points group has accounted for 13 drivers in each season.  Only three have reached the championship round: Harvick and Keselowski in ’17, as well as Logano in ’18.  But of course, Logano’s playoff run last year accounts for one of the two titles.

So, with all that said, how divided might this year’s playoff field be?  Will the championship hopefuls split into the same three categories?  Or, will this season offer a different breakdown of the playoff field?

One contest to keep an eye on is who wins the regular season.  Logano’s victory at Michigan International Speedway one week ago bumped him into the lead by nine points over Busch.  If Logano holds the points lead through the Brickyard 400, he would begin the playoffs with at least 31 playoff points, compared to Busch’s minimum total of 35.  If Busch were to win the regular season with Logano second, the No. 18 team’s total would swing to 40 with 26 for the No. 22.

Based on the gap that they hold on the rest of the field in season-long points, Busch and Logano are the only drivers with a realistic chance of hitting the 50 playoff point barrier.  To both get there, they would need to do some more winning over the next few months.  If Busch won twice and retook the points lead, he would only have to win the regular season to reach 50 playoff points.  Logano’s path is a bit tougher.  He would need the equivalent of four more race wins plus the regular season champion’s bonus to surpass 50 playoff points.

Meanwhile, Keselowski and Truex are the most likely candidates to wind up in the 30-point group.  At third place in the overall standings, Keselowski is on track to earn at least 27 playoff points.  Even if he loses points positions to drivers like Harvick and Chase Elliott, a race win and a few stage wins is all he would need to get near 30 playoff points.  Given Keselowski’s strength this year, one win and a few stage wins in 11 races is certainly a reachable goal.

Truex also has the potential to rise or fall in the points standings, but he is capable of getting the playoff points he would need to reach the 30-point group.  He’s currently tracking to earn at least 22 playoff points.  Like Keselowski, either two race wins or one race win and some stage wins would do the job.

If Busch and Logano keep up the pace, playoff point distribution for 2019 will follow similar patterns as the two previous years.  However, Keselowski and Truex are the drivers who really have the power to shake up the playoff picture.  If the Nos. 2 and 19 teams do most of the winning over the next 11 races, Busch and Logano will not reach the 50 playoff point barrier.

Without those one or two drivers gapping the playoff field, the road to the championship race could be wide open by September.  Busch and Logano still have the best shot at reaching the final round of the playoffs. However, the greatest obstacles that they face will be their own teammates.