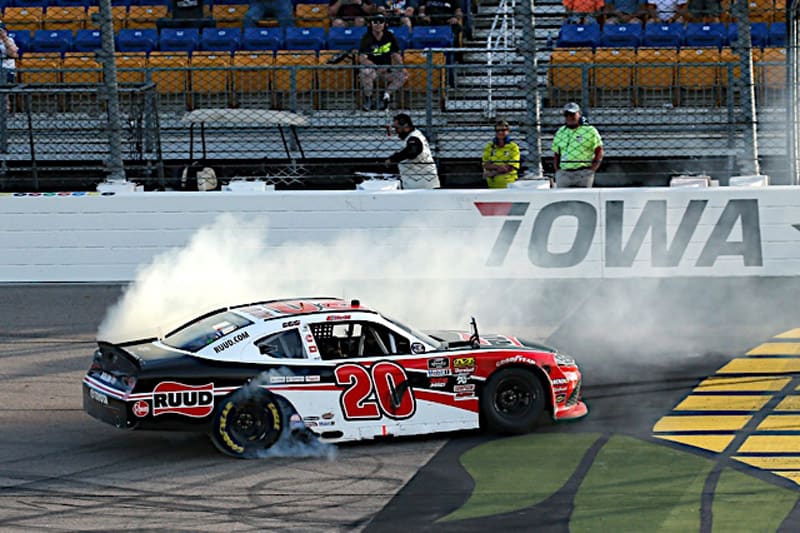 Christopher Bell probably isn’t familiar with the short-lived rap career of boxing great Roy Jones Jr. If he was, though, he’d know that the future hall of famer’s most notable song was “Ya’ll Must’ve Forgot,” a title that was definitely applicable at the CircuitCity.com 250 at Iowa Speedway.

Just in case the last few weeks, which saw the driver of the No. 20 Toyota do some non-Bell-like things while finishing 31st at Pocono and 13th at Michigan (while sandwiched around a top-five run at Pocono, granted), made anyone forget, Iowa featured Bell very much back in his element. When the track length involved is less than a mile long, he tends to be in a class by himself, like he was this time out while leading 186 of 200 laps.

Yes, he had to deal with Cole Custer, who did his best Bell impersonation early after starting on the pole and showing the way for most of the first stage. Custer also briefly was a factor in the final stage, after his pit crew got him out in front by the slimmest of margins under caution, thus earning his No. 00 Ford the crucial outside lane on the ensuing restart.

It was only a matter of moments until Bell was back in the lead, and only a potential tire rub that never materialized after some brief contact with Custer loomed as an impediment to another trip to victory lane. Iowa might not race a lot like the other short tracks on the NASCAR Xfinity Series schedule, but it hardly matters to him, as he’s now won five of the last nine short track races in the series dating back to the start of the 2018 season, with a couple of second-place results thrown in there to boot.

Perhaps more importantly, his average finish at Iowa Speedway since joining the Xfinity Series full time is 1.3. Custer or Tyler Reddick may yet prove able to stop Bell from claiming this year’s championship, but they can’t count on Bell doing anything but flexing his muscles again when the second race in corn country rolls around in July.

There’s been a lot of talk about the pressure Harrison Burton is under for failing to win while driving one of Kyle Busch’s trucks. He found the best possible way short of a victory to respond at Iowa, first piloting said truck to a third-place finish, then following up by rolling home fourth in the CircuitCity.com 250 — and both on the same day, thanks to a rain-related postponement of the Truck Series race.

It was a legit result too, as Burton ran inside the top five for most of Sunday evening, often looking like the third or fourth-best car on the track. While the leaded went mostly unchallenged, the 18-year-old had to show his stuff battling a number of other fast cars, including the one driven by fellow youngster Zane Smith, who wound up fifth.

Was it enough to get the Rowdy-sized monkey off his back in his regular ride? Definitely not, but it was the kind of run that he needed right about now, and further proof that he’s pretty good at getting any kind of race car around short tracks. Don’t give up on him yet.

This section could once again be the place for a discussion of how much the outside lane on restarts benefits the leader, though that ground was thoroughly covered last week for a much different track at Michigan. There’s no need to rehash it again.

We’ll focus on a more personal bad thing here, as in the rare bad day for Reddick. The defending series champion entered Iowa on a remarkable string of 10 top-five finishes, one that dated all the way back to Phoenix and included three victories. The chance to extend it, though, went away before the first stage was over.

With just a handful of laps left before the stage break, Reddick’s No. 2 Chevrolet suffered a right-side tire issue, and while he tried to nurse it until the green and white checkered flag came out, it was ultimately for naught.

Issues for @TylerReddick forced the No. 2 team to pit right before the end of Stage 1.

As a result, he's being scored two laps down in 27th. pic.twitter.com/FoFOzF9RUL

Reddick never got those laps back, finishing his day one lap down in 15th place. It’s a testament to the season he’s having that it was his worst finish of 2019 so far, but it couldn’t have felt good for he and his team to fall out of contention so early and never be able to claw their way back.

Sunday’s race saw an ugly moment that eventually had a happy ending. During stage two, Brandon Brown brought his car down pit road and had to be helped out of it, looking somewhat the worse for wear when he exited.

Brandon Brown is out of his car and on the way to the infield care center. pic.twitter.com/n8gKEZuMKU

The problem was the engine on Brown’s Chevrolet, which started filling the cockpit with exhaust fumes once it broke down. Happily, Brown was fine after a trip to the infield care center, and FS1 actually talked to him about what happened, a rarity for drivers who exit the race and aren’t running up front.

Brandon Brown has been released from the infield care center. He tells @CopaCavanna what happened. pic.twitter.com/QbYuzbOIa9

Iowa was not super kind to the underfunded bunch, with no real underdogs ending up inside the top 10. That said, there were some good days scattered around the garage, including a 12th-place finish for Jeremy Clements, his best run so far this season. Clements has now finished 18th or better in five straight races, a feat he didn’t manage until early September last year.

It was also a good day for Gray Gaulding, who ended up as the final car on the lead lap in 14th. Gaulding tasted the rarified air of true underdog bliss with a second-place finish at Talladega in April, but a mid-teens result is something his team can shoot for on a more regular basis, and they’ve now pulled it off in three of the last four Xfinity Series races.

The Cup Series took the Father’s Day weekend off, and none of its regulars chose to spend it running Xfinity cars in Iowa. That likely won’t be the case at Chicagoland, but there have been fewer ringers than usual all season long as there simply aren’t many seats for them to occupy, so we’ll have to wait and see.

“I got the win at Dover on Mother’s Day weekend, or I guess the weekend before with my mom there, and now I just won on Father’s Day weekend with my dad here, so it was pretty special.” – Christopher Bell

“I think every driver will agree that this place puts on the best racing that we go to.” – Cole Custer

For the second straight week, the Xfinity Series gave us an “eye of the beholder” race. If your standard of what constitutes good racing must include tight battles and passes involving the leader, you likely came away disappointed. However, if you’re fine with the action taking place elsewhere within the top 10, Iowa did indeed offer up a good show in that regard.

Bell can’t help that he’s super fast on all of the series’ short tracks. It’s up to everyone else to figure out how to keep up with him there, and only Custer looked like he may know how at the moment. There’s about a month and a half for the rest of the garage to do some serious homework.

It’s another off week for the Xfinity Series gang, the only one of the summer. The trucks will be at Gateway while the Cup Series stars are at Sonoma.

All three national series will converge again the following week at Chicagoland, where the Xfinity Series will put on the Camping World 300. Kyle Larson won the race in 2018, but is unlikely to defend his crown considering that Chip Ganassi Racing no longer fields an Xfinity car. It will be the first event of 2019 broadcast by NBC Sports, with coverage slated to begin at 3:30 p.m. ET on Saturday, June 29.