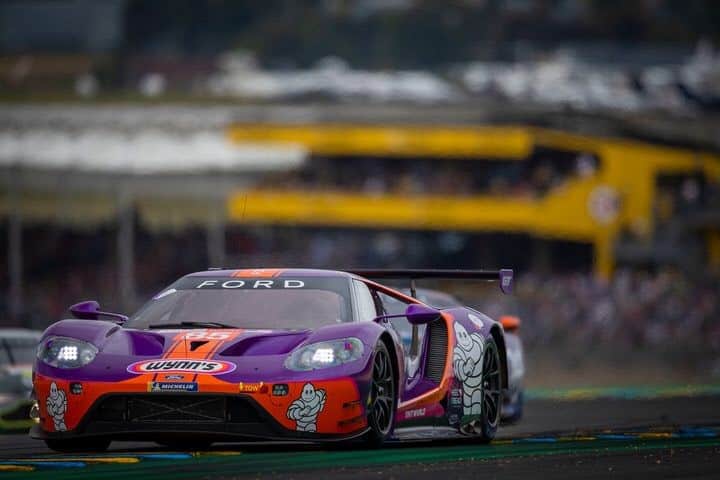 The Automobile Club d’Ouest announced early Tuesday morning (June 18) that Keating Motorsports has been stripped of their GTE-Am class victory from last weekend’s 24 Hours of Le Mans and disqualified from the race altogether.  The action is based on two post-race penalties having to do with the fuel system.

The first violation was that the team had failed to meet the minimum refueling time of 45 seconds on their stops.  A similar rule has been in effect in the IMSA WeatherTech SportsCar Championship since Sebring last year, but it is for a much lower amount of time.  Refueling times were codified in IMSA after a stop and five-minute hold penalty was given to Montaplast by Land-Motorsport in the 10th hour of last year’s Rolex 24 at Daytona under Attachment No. 2 of the IMSA Sporting Regulation, better known as the “anti-sandbagging rule.”

The Keating Ford GT was able to be refueled in 44.4 seconds.  As a result, the original penalty was going to be six-tenths of a second per pit stop, of which there were 23.  In addition, that penalty would be multiplied by four.  The result would have cost the team the class win after leading for the last 19 hours.

In post-race inspection, the Ford GT was discovered to have a fuel cell with a capacity of at least 96.1 liters.  This was above the maximum allowed capacity of 96 liters (25.3605 gallons).  Once this was discovered, the No. 85 Ford was disqualified from the race.

Meanwhile, Ford Chip Ganassi Racing IMSA’s No. 68 Ford GT was also disqualified due to a fuel capacity issue.  In this instance, the fuel cell in the No. 68 was discovered to be out of compliance by an even larger amount than the Keating Motorsports Ford GT was.

Both cars disqualified have strong IMSA ties.  Keating Motorsports is technically Riley Motorsports, which competes full-time in the IMSA WeatherTech SportsCar Championship’s GT Daytona class with a Mercedes-AMG GT3 (the team is not allowed to run under the Riley Motorsports title due to Riley Technologies being considered a manufacturer).  Owner-driver Ben Keating and Jeroen Bleekemolen are full-time in the series, while Felipe Fraga was drafted into the effort.  The Ford Chip Ganassi Racing No. 68 is the No. 66 that runs in IMSA’s GT Le Mans class, with their regular endurance lineup of Sebastien Bourdais, Dirk Müller and Joey Hand.

Surely not the way Ford would want their most recent foray into International Endurance racing to be remembered.