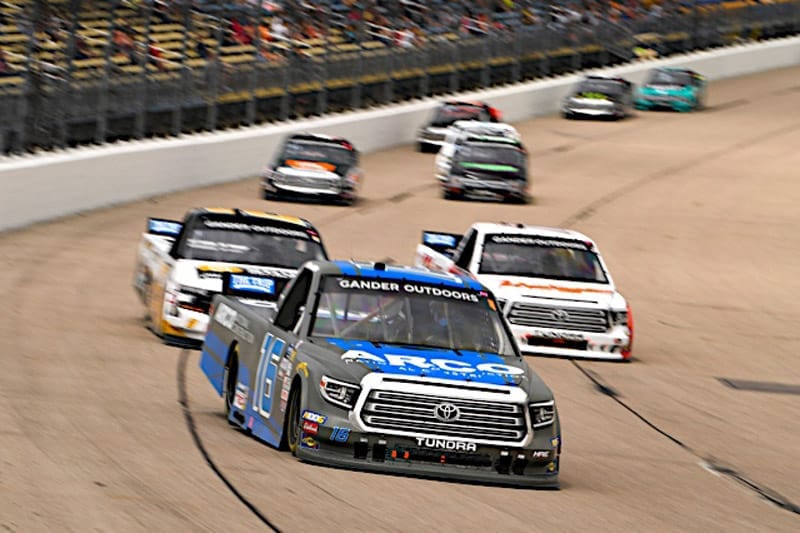 This weekend not only marks the first road course event of the 2019 Monster Energy NASCAR Cup Series season but the first since the ROVAL back in September. Road course racing always brings out the best drivers, testing their skill and patience. Last season, the Charlotte Motor Speedway ROVAL put on arguably the craziest race we had seen in a long time.

Should we expect the same this week with return of the carousel at Sonoma? Will we see the typical Sonoma racing or an action-packed race that rivals the on-track fracas seen in Charlotte?

Meanwhile, after the Johnny Sauter and Austin Hill incident on Sunday afternoon in Iowa, the question is whether drivers should settle their differences outside of the vehicle or use their cars or trucks as weapons. Sauter decided to use his vehicle as his weapon on Sunday and was suspended for one week as a result.

What should drivers do in cases like that? Is their vehicle their only way to make their point during a race? Or should they wait until after and settle it face to face like we have seen in the past?

Q: Should we expect a race similar to the ROVAL at Sonoma with the new layout for many of the drivers? Or much like Sonoma has always been? Alex S., Denver, CO

A: While the ROVAL provided amazing racing and one of the best road races we have seen in a very long time, Sonoma will probably put on the same show that Sonoma always has.

The new layout is a little bit different for many of the drivers for sure, but in reality, they still know 80% of the track and will have plenty of time to get up to speed during practice. There will be excitement as there is with every road course event, but it will not match the ROVAL.

Expectations should be high for a racetrack that is outside the week-to-week norm in the Cup Series, but setting them as high as we did for the last road racing event is just not realistic. The ROVAL was a brand new layout, and a very difficult one at that. That is why we saw so many incidents, off course mayhem, and close and exciting racing.

Sonoma always puts on a good race, even if stages have somewhat taken the strategy aspect out of the equation. The varying strategies throughout the race, and watching them all come together towards the end, was part of what made Sonoma special. Stages probably shouldn’t be used on road courses but that is another argument for another day.

Do not expect a dull race this coming weekend, however. We will see a great race, with many strategies and perhaps a new winner depending on how everything plays out. No matter what, road racing is excellent in the sport and this Sunday should be no different.

Q: Do you have an issue with incidents such as Johnny Sauter vs. Austin Hill when one driver uses their car as a weapon? Or would you rather them settle it outside the car and not have it be “Boys Have at It” on track? Walter R., Chico, CA

A: They always say it is better to settle an argument face-to-face than with your vehicle. That stands to be true, and it is always best to settle a fight outside of the car or truck.

What Johnny Sauter did on Sunday afternoon to Austin Hill was unacceptable and suspending him was the right call. We have seen so many instances like this where drivers have used their vehicles to get back at someone, like Brad Keselowski in Charlotte 2014 against Matt Kenseth, or Kenseth against Joey Logano in 2015 at Martinsville.

There have been fights outside of the car after incidents as well, but to use the truck as your way of getting back at someone is wrong. If you want to retaliate another week, then so be it. That has definitely happened before and that is acceptable. Retaliation is part of the sport, just as long as it does not cross the line.

Sauter had nothing to say outside of the truck Sunday and did not speak to media until well after the incident had occurred. There were no words or blows exchanged between the two of them outside the car, and all we saw was Sauter going after Hill after Hill got into him. That is the wrong way to go about it.

Drivers should either talk it out or fight it out. We have seen Clint Bowyer and Ryan Newman as well as Michael McDowell and Daniel Suarez over on the Cup side have off-track fights after on-track incidents, which seems like the right way to do it. Do not use the vehicle as your scapegoat; it is unsafe and not a good look at all — especially for a veteran like Sauter.

Bowyer didn’t have a fight, he punched a driver who was still strapped into his seat inside his car. And Bowyer kept his helmet on to do it. What kind of fight is that.

I’ve always liked Bowyer but lost some rrspect for him after the incident with Newman. Never had much use for Sauter and parking him was definitely warranted.