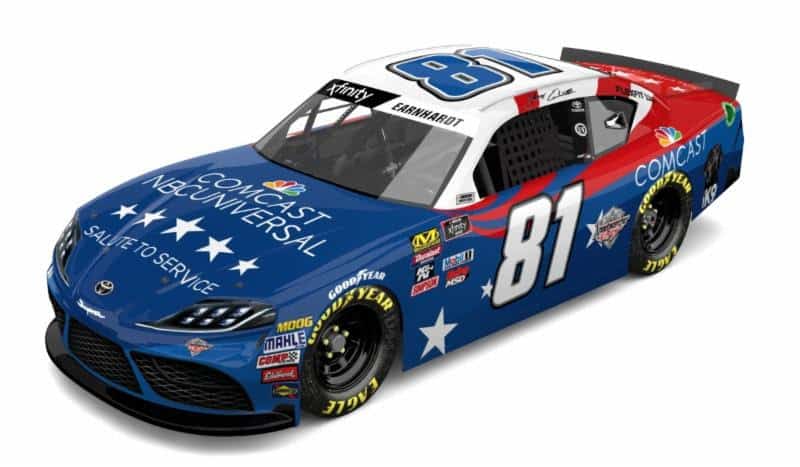 Much like it has in the past, Comcast NBCUniversal will honor the military. This time it will at the next two NASCAR Xfinity Series races — first at Chicagoland Speedway next Saturday (June 29) and on July 4 Weekend at Daytona International Speedway (July 5).

At Chicagoland, Jeffrey Earnhardt will pilot the No. 81 “Salute to Service” Toyota for Xtreme Concepts Racing, a team making its second start in the series. The car will be wrapped in red, white and blue.

“I’m really excited to be partnering with Comcast and the military on the Comcast Salute to Service Toyota for Chicagoland Speedway,” Earnhardt said in a press release. “Our race team at Xtreme Concepts Racing feels as though we can’t ever do enough for the men and women that protect us and it’s awesome to be partnered with a company like Comcast that feels the same.

“We will give the fans at Chicagoland Speedway and watching on NBCSN something awesome to cheer for. Hopefully, they watch us park it in victory lane.”

In addition to Earnhardt’s paint scheme at Chicago, Xfinity Series drivers will bear the names of active military units and installations on every windshield header at Daytona. The names of the units will take place from the traditional Xfinity branding along the top of the windshield.

“At Comcast NBCUniversal, our sustained commitment to our nation’s military community has never been stronger,” Brigadier General (Ret.) Carol Eggert, senior vice president of military and veteran affairs at Comcast NBCUniversal, said in a press release. “We truly value the tremendous contributions of those who serve our country and wanted to recognize them and their families in a special way as we celebrate our country’s independence.”

At Chicago, Comcast NBCUniversal will grant more than 100 local service members and their families with grandstand tickets and access to race day activities and events. The goal is to connect NASCAR with the local military community.

The green flag for the Camping World 300 at Chicagoland Speedway is set to wave shortly after 3:30 p.m./ET. It’s the first race of the season NBCSN will broadcast.