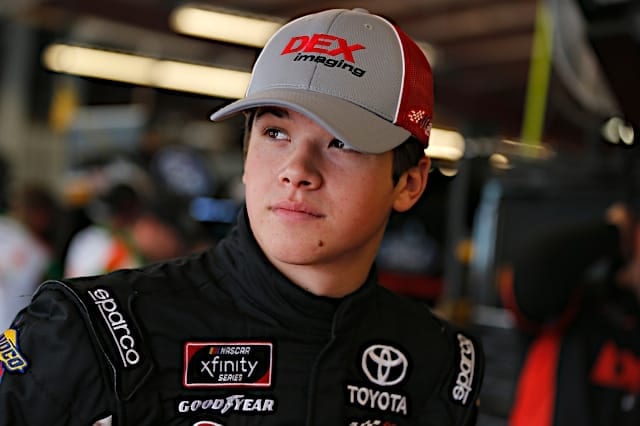 Harrison Burton‘s career has moved like a hot knife through butter over the past handful of seasons. Now, the 18-year-old and recent high school graduate believes he’s ready for the NASCAR Xfinity Series.

In 2016, Burton made his ARCA Menards Series debut at Iowa Speedway before competing in his first Gander Outdoors Truck Series race at Martinsville Speedway that fall for Kyle Busch Motorsports.

The 2017 season was a breakout for Burton. He won the K&N Pro Series East championship, winning five of 14 races and finishing in the top 10 in every race. He, however, wasn’t eligible to compete full time in the Truck Series until 2019, as by NASCAR rules, a driver must be at least 18 years old to run an entire national touring series schedule.

Meanwhile, in early April, it was announced Burton would be running eight Xfinity races over the course of the season for Joe Gibbs Racing. His first stab at the series was at Bristol Motor Speedway where he qualified fifth and finished 10th, having a little contact with Cole Custer late in the race, which cut down the right front tire.

“It’s another step,” Burton told Frontstretch of running a part-time Xfinity schedule. “Every level you go in is another step and you have to step up to that occasion. I think the level of perfection that you must have throughout a race to win is higher. They run longer races, so there’s more time for you to make a mistake and more time for you to make up from a mistake, too.”

Unlike other sports, Xfinity isn’t positioned as NASCAR’s minor leagues, nor is the Truck Series. Sure, there are young drivers developing a skill set to catch the eye of a Monster Energy NASCAR Cup Series owner to compete in the big show — the most competitive form of motorsports in the world, but for Burton, he’s accustomed to making big steps quickly.

“It’s tough,” he said of adjusting to a higher series. “I’ve kind of been dealing with that my whole life, which is good. I feel like it’s given me an advantage. I think my come up has helped me shape the mold of trying to find ways to beat you with less experience.”

Since he competed in both the Truck and Xfinity races at Iowa Speedway last weekend, Burton now has 27 national touring starts. But he believes even with a moderate amount of experience, he’s ready for that next step now.

“I feel like I’m ready,” Burton stated of running Xfinity. “I feel like my debut was good. I had a lot of fun and proved that I belonged there, but hopefully in the next few races we can go out and get a top five, win a pole or maybe win a race. I’m in really great equipment so I might as well take advantage of it.

“Any laps help, no matter what you’re in. I felt like I was more prepared for my Truck stuff after my Xfinity ride. I know when I go to Bristol in the truck, I’m going to feel really confident that I can run at a very high level there and can run well and have a shot to win the race. It was good for me to get that experience.”

Indeed, Burton’s in great equipment, as the No. 18 has won 84 Xfinity races since the 2008 season began. Most of the triumphs have been from Cup Series stars, primarily Kyle Busch, who is on a quest of 100 Xfinity victories (currently has 95, three this year in four starts in 2019).

Is it fair to compare Burton to some of the sport’s best whoʻve driven the No. 18 given his lack of experience? He says go ahead, do it.

“I compare myself to the best, I think that’s the only way to learn,” Burton added. “Even though it seems unrealistic for an 18-year-old kid running in his first few starts to run as well as Kyle Busch would run, you have to hold yourself to that level or you’ll never get there. You have to hold yourself to a high level and be hard on yourself, learn, be productive and not try to just be the next guy.”

Outside of Busch’s three victories, Jeffrey Earnhardt has the No. 18 team’s next best finish, a third at Charlotte Motor Speedway. Meanwhile, Riley Herbst, a driver with a similar stature as Burton (four career Xfinity starts) has a best finish of ninth this season.

Because of the success of the No. 18 team and Burton’s willingness to learn, he believes a victory isn’t out of the question.

“I wouldn’t show up to the racetrack if I didn’t think a win wasn’t realistic,” he mentioned. “In Gibbs quality equipment, a win is always realistic.”

After finishing fourth over the weekend in Iowa — only behind three of the top drivers in the series: Custer, JGR teammate Christopher Bell and Justin Allgaier — Burton is on par with his goals for the Xfinity ride in 2019: run up front and learn. But even if he doesn’t win in Trucks this year (best finish of third in nine races), he doesn’t believe that means he’s not ready for Xinifty.

“I feel like you have to show signs of being successful,” Burton said. “You see guys like Jimmie Johnson not have a flashy Xfinity Series career, goes to Cup and is a seven-time champion. I don’t think it’s a necessity, but it’s good for confidence, it’s good for your team’s confidence, knowing they’re getting a driver that’s won races.

“There’s a fear of not making it there [to the next series], so if you have an opportunity to go there, you’re going to go. You see guys like William Byron that go straight to Cup really fast, that’s crazy and unheard of, but it’s becoming more like that. You have to adapt and win races quickly or else you get the boot. It’s a fear of not making it, so you rush yourself to make it.”

As for the final six Xfinity races on his 2019 schedule, Burton is using it as a “trying-out phase,” should an opportunity arise in 2020 at the Xfinity level.

Kid, I’m rooting for you.

But get some wins in the truck series’s best equipment before you think too hard about moving up, OK?

If Harrison is not ready for Xfinity racing, then nobody has ever been ready!

Noooo he not ready