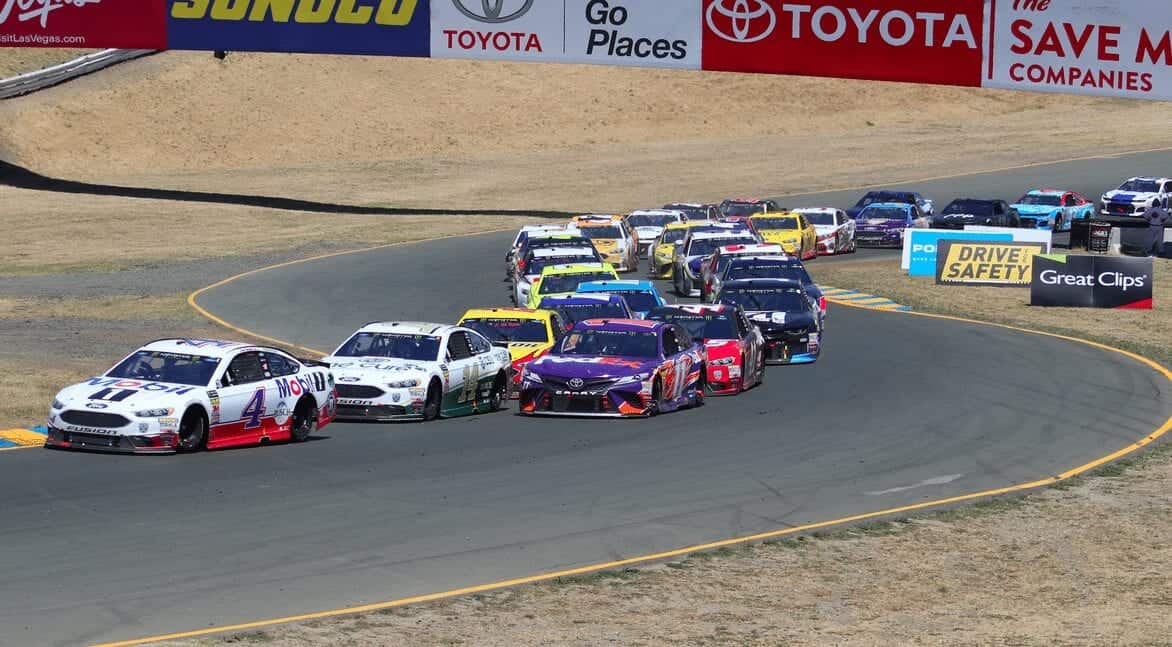 Is there a carbon monoxide problem in NASCAR?

In the NASCAR Xfinity Series race this past weekend, Brandon Brown was on track in the middle of the second stage at Iowa Speedway when his engine went sour.

The Virginian’s cockpit began to fill with smoke. Brown thought he could still get something out of the car while on pit road, so he didn’t stop and instead just kept going–until he was overcome by fumes in the car.

This is the third time in this season alone that we’ve seen a driver be exposed to carbon monoxide. Last month at Dover International Speedway, Denny Hamlin went to the infield care center following the Monster Energy NASCAR Cup Series race. Hamlin had experienced nausea and double vision after his car had hit a piece of debris, which damaged the right rear of the Toyota and allowed fumes into the cockpit. Hamlin finished the race.

Later in May, Austin Dillon was making a guest appearance in the NXS race at Charlotte Motor Speedway when a somewhat similar situation developed. Dillon was in a wreck involving John Hunter Nemechek, where Nemechek’s contact with Dillon’s Chevrolet drove the crush panels out. Once again, carbon monoxide fumes came into the cockpit, only in this case as did the heat. A brutally hot day in Charlotte contributed to a minor burnt shoulder for Dillon, who was relieved by his Cup teammate Daniel Hemric for a handful of laps before Hemric ended up parking with 11 laps to go.

And there have been plenty of case studies before of drivers suffering from carbon monoxide poisoning. Although his career was more or less done by that point, Hut Stricklin retired after 2002 after being diagnosed with it. Rick Mast ended his career in the same year.

Legendary promoter Humpy Wheeler wrote in his book that Lee Roy Yarbrough, one of only two drivers to win all of the three classics (Daytona 500, the World/Coca-Cola 600 and the Southern 500) in a single season, suffered from “bad” carbon monoxide poisoning once at Atlanta Motor Speedway.

Yarbrough shone brightly in 1969 but in just 11 years’ time was found not guilty of attempted first-degree murder of his mother and battery to a law-enforcement officer due to insanity. Yeah, Yarbrough is one of the most tragic downfalls we’ve ever seen in racing, and while it seems a terrible wreck at Texas World Speedway did most of the damage, getting exposed to carbon monoxide probably did no favors to his long-term mental health.

What can NASCAR do to fix this problem?

If either of these factors go unchecked, the best case scenario is a tragedy. And because of the nature of racing, both factors are significantly harder to keep in check than in any other sport.

To be fair to NASCAR, when developing the Gen 5, they made changes in direct response to Stricklin and Mast’s incidents that cut down on the problems. Obviously, there is only but so much NASCAR can do here. Cars going in access of 200 mph can only be but so safe. But when something starts to become a pattern, it’s time to at least do something.

Some drivers have already taken to using carbon monoxide filters on their cool box. Great! Let’s make that mandatory yesterday.

Next, with the advances in technology, there’s no reason for every one of these cars and trucks to go out there with a sensor in the cockpit that will alert the driver and send a signal to NASCAR when carbon monoxide levels get too high. When they do, the driver must bring the car down pit road immediately, no questions asked.

There’s absolutely no reason for these changes to not be implemented besides cost, but are these really that expensive to begin with? And there shouldn’t be a price on practical safety ideas.

Did the time fit the crime?

There was some drama that went down at Iowa Speedway between Johnny Sauter and Austin Hill.

Johnny Sauter versus Austin Hill. What everyone is still talking about. pic.twitter.com/vfRBzPvgQA

Following these incidents, NASCAR penalized Sauter with a one-race suspension and Hill was put on probation. There has been some controversy this week, however, on if Sauter should still be eligible for the playoffs.

At first, I agreed with some of the takes out there, that Sauter shouldn’t be eligible and his season should more or less end in June. But then, after thinking about it, it’s clear to me that NASCAR made the right call.

We’ve never had a situation quite like this in the playoff era. Sure, we’ve had drivers wrecking each other in controversial fashion in the past 10 years. But it was almost always during the last 10 races of the season, and only once (Jeff Gordon wrecking Clint Bowyer in 2012) where it made a significant difference in who ended the season as a champion. And in that case, Gordon got away without even a suspension because it wasn’t under caution and, well, he was Jeff Gordon.

To my knowledge, there is nothing in the rulebook that outright states or implies that a driver could lose playoff eligibility when wrecking somebody under caution. So we can’t sit here and pretend Sauter knew that he’d be throwing his season away by wrecking Hill under caution.

While a two-race suspension would be more fair in respect to Matt Kenseth, who got that penalty for wrecking Joey Logano at Martinsville in 2016, ultimately NASCAR made the right call. As long as, however, that they make it clear to everybody – to the drivers, media, and in the rulebook – that going forward, anybody who wrecks somebody under caution is going to be suspended and not given a playoff waiver. Because if they don’t, the punishment they handed out to Sauter isn’t going to really discourage playoff drivers from wrecking people under caution besides losing out on seven measly playoff points. Cracking down hard on post race inspection failures has led to just one issue in four months, which is way better than it seemed to be last year.

Who could break out at Sonoma?

This week, NASCAR makes its annual pilgrimage out west to wine country, hosting a Cup Series race at Sonoma Raceway.

This will be the first time Sonoma has used the carousel corner section in NASCAR competition in 27 years, which is going to be a negative for this race, more than likely. Sonoma is too slow as it is, so now we’re adding another set of corners for drivers to run single file around before setting up passes in the hairpin turn at the end of the lap? This just seems like a bit of a gimmick.

With AJ Allmendinger not entered for this race, it’s time to have a moment of silence for the archetype of the road course ringer. Ringers had slowly been leaving the sport the past two decades, and Allmendinger was the last one who seemed like his entire season hung on the balance of those two races.

There are a number of factors that led to the death of the ringer, but ultimately the biggest probably was young Cup drivers taking an interest in road course racing in the mid-2000s. Suddenly, we had Kasey Kahne and Carl Edwards winning at Sonoma after probably spending a ton of time at either driving schools or on the iRacing simulator. Combine that with an increase of road courses on the NXS level, and thus every young talent coming up getting a lot of experience on the discipline, and it was only a matter of time.

Predicting a winner at Sonoma is, outside of the plate races, the hardest thing to do all season. There have been nine winners in the past 10 races, with only Martin Truex Jr. getting repeat wins in that timespan. And some of these winners were a bit ridiculous. What has Jimmie Johnson ever done at the two traditional road courses besides almost dying at Watkins Glen International before or after his 2010 Sonoma win?

Regardless, the driver to beat this week might be Kevin Harvick. Harvick has been extremely underrated at road courses since joining Stewart Haas Racing, having a Sonoma win and eight top-10 finishes in 11 road course races at SHR. That number also includes four straight top-10 finishes at Sonoma heading into this weekend. Happy and Truex are just about the only two drivers who should definitely have good races on Sunday.

That ‘slow corner’ in the Boot gives drivers another zone for passing…something that they can take advantage of for more excitement. Obviously slow doesn’t mean dull, boring, or unexciting. Why do you think Martinsville seldom fails to thrill?

Curious to know what this part at the end of the Driver discipline section has to do with anything. “Cracking down hard on post race inspection failures has led to just one issue in four months, which is way better than it seemed to be last year.”
Just seems like a random thought.

When Sauter’s “punishment” came down I wondered how it was impacted since it seems NASCAR took into account other incidents with Hill and that technically speaking Hill “asked for it” based on wrecking Sauter in the first place. This is not condoning the behavior as one should never intentionally wreck another especially under caution.
Hill’s spotter screwed up though as it was obvious the 13 was gunning for him spotter should have warned him and then had Hill take a hard left and then slam on the brakes to have the 13″ fly on by”

Johnny Sauter did what he had to do and NASCAR did what they had to do. After Martinsville fall 2015, NASCAR made it clear if you go out and blatantly use your car as a weapon, they’re going to suspend you. Sauter did and must sit a race. However, I’m glad they didn’t take playoff eligibility away. The you must start every race rule was more about preventing part-time teams from winning a championship, not as a form of NASCAR discipline.