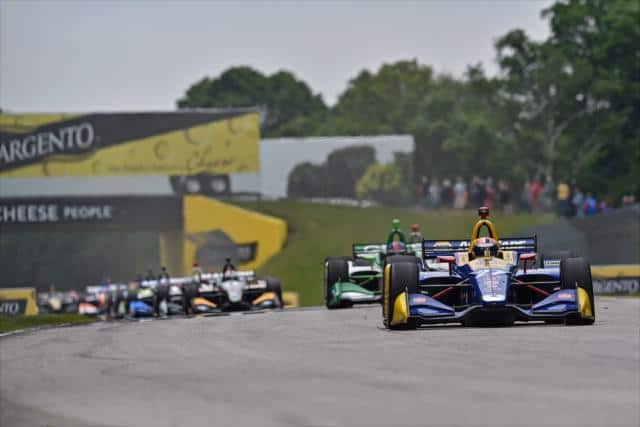 After finishing runner up in three of the last four races, Alexander Rossi finally broke through to again reach the top step of the podium.

In a dominant performance, the young American driver ran away with the victory at the Rev Group Grand Prix at Road America on Sunday afternoon (June 23), closing the gap to Josef Newgarden in the NTT IndyCar Series season-long points standings to just seven points.

Colton Herta led the field to the green flag after becoming the youngest pole-sitter in series history on Saturday (June 22), but was quickly overtaken by Rossi on the opening lap. Rossi muscled his way by the polesitter on the outside of turn 1, putting the 2016 Indianapolis 500 champion in the lead and in position to run away from the field.

After making the decisive move in the first turn, the Andretti Autosport driver never looked back, leading 54 of 55 laps and clinching his second win of the year by a gap of nearly 30 seconds.

While it was a nice Sunday cruise for Rossi, a few other drivers didn’t have it so easy.

Scott Dixon went around on the opening lap with a little bit of help from Ryan Hunter-Reay, putting him at the back of the field and forcing the Kiwi to race his way back to the front of the pack.

A closer look at that opening lap moment with Dixon & RHR.
The @DHLUS car fell back to P18 and is battling his way back – up to P15 now!#IndyCar #RevGroupGP

Takuma Sato got by Newgarden on the first lap to move into the top five, but was then bumped off the track by James Hinchcliffe in turn 5 — dropping him all the way back to 12th in line. Sato’s teammate Graham Rahal spent the entire day in the top five, fending off a late-race charge from Herta.

While the pair of Rossi and Herta pulled away early, the rookie quickly fell back into the clutches of Will Power and Rahal, who made quick work of the youngest winner — and now pole-sitter — in series history. The Aussie then set his sights on Rossi, who had gapped the field by almost 10 seconds by that point.

Meanwhile, Dixon and Hunter-Reay carved their way through the field, racing their way into the top 10 by the end of the first stint on the harder, longer-lasting, black-sidewalled Firestone Firehawks.

Herta, in a scuffle with Simon Pagenaud on lap 21, went wide at turn 5 after making contact with the frenchman, dropping him back to eighth in the order. Herta spent the rest of the afternoon hovering around the top five, but was never much of a factor throughout the rest of the race.

Newgarden, who had jumped Rahal during the first pit stops, and Power were unable to track down Rossi — who had stretched his lead to over 20 seconds. The Team Penske teammates were relegated to a fight for second place.

The championship leader pulled right up to Power’s gearbox and was able to get a run down the long back straightaway heading into Canada Corner, despite nearly running wide at the Kink. However, Power, closing in on turn 12, forced Newgarden to go around the outside and successfully defended the position.

In the last 10 laps, Newgarden fell a few seconds behind Power, bunching up Rahal, Herta, Hinchcliffe and Dixon in positions fourth through seventh, setting up a mad dash to the finish. Rahal, however, was never able to get around Newgarden, giving the pair of Americans third and fourth place finishes.

Dixon, who was dead last after his first lap spin, was able to get around both Herta and Hinchcliffe in the last few laps, capping a remarkable drive with a fifth-place finish.

Herta, with his red Firestone Firehawks worn all the way down to the chords, lost two spots to Felix Rosenqvist and Hinchcliffe in the closing laps after nearly losing it in the high-speed Kink, ending his day in eighth after starting on the pole.

Pagenaud, who started 16th, managed to work his way up to P9, while Sato rounded out the top 10. The less than stellar result for Pagenaud dropped him 61 points back in the standings, setting the championship up to be a two-horse race.

With the victory, Rossi will head to next week’s Honda Indy Toronto less than 10 points behind Newgarden. And with just seven races remaining on the schedule, the two will be in for a dogfight to take home the series crown at WeatherTech Raceway Laguna Seca.