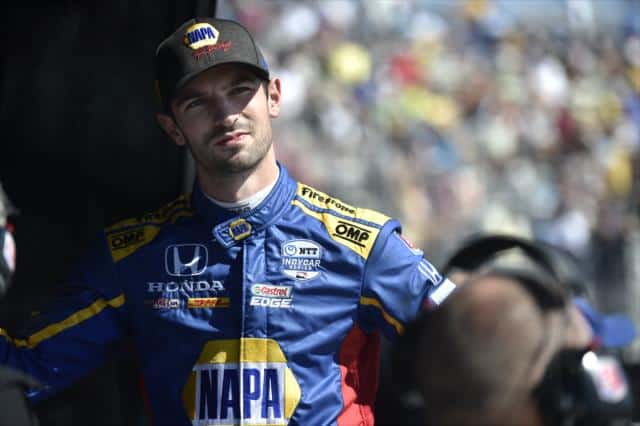 The NTT IndyCar Series is making its annual visit to America’s National Park of Speed this weekend at Road America and the racing, so far, is shaping up to be just as stunning as the scenery.

With a few long straights and plenty of passing opportunities, the 4-mile, 14-turn monster of a circuit always produces lengthy highlight reels, and as the intensity turns up as the series hits the second half of the season, expect more of the same.

Alexander Rossi, who has been strong all weekend, will be looking to stem the tide of good, but not great results that have plagued him since losing out to Simon Pagenaud at the Indianapolis 500. With two runner-up finishes and a fifth place in the second duel in Detroit, the young American has been among the fastest cars in the field the last three rounds but just hasn’t been able to get the job done.

If he wants to fight for the championship with points-leader Josef Newgarden, who has done nothing but get the most out of every weekend, he’ll have to find victory lane again soon. Behind some excellent calls from the timing stand, Newgarden has already secured three wins this season and looks to be the favorite to claim his second title.

Now back at Road America, where Newgarden dominated last year–he started on the pole and led 53 of 55 laps–it’ll be up to Rossi to take the fight to the 2017 series champion and prove that he’s worthy of a crown of his own.

For the most part, Rossi has done what he needs to do this weekend. The No. 27 Honda topped the charts during Friday’s afternoon session and finished sixth in the first session of the weekend.

But Newgarden was right there with him, as the Team Penske pilot ended the first practice just ahead of Rossi in fifth, then laid down the third fastest lap in the afternoon session, less than half a second behind the Andretti Autosport driver, then topped the final session on Saturday morning.

Will Power, who is still looking for his first win of the year, looked just as fast as his teammate. The Aussie muscled his way into second on the charts in the afternoon session and ended both mornings inside the top five.

Colton Herta hung around the top of the speed charts for the second and third practice sessions, then proved to be the quickest of them all, taking his first career pole position on Saturday afternoon. The youngest winner in series history now also holds the title of youngest pole-sitter in series history and will be looking to kick start a season that, other than his win at Circuit of the Americas, hasn’t lived up to the early hype.

But he’ll have a pack of hungry veterans–all looking to prove that experience is king–chasing him to the green flag. Rossi was just a tick slower than Herta and will start alongside him on the front row, while Power and Newgarden will be right behind them in row two.

Rahal Letterman Lanigan Racing also continued to make the case that they’re one of the top teams in the series, as Graham Rahal and Takuma Sato both cracked the Firestone Fast Six. Rahal, in a throwback to his father Bobby Rahal’s 1994 Rahal-Hogan Lola, slightly outpaced his teammate and will start fifth alongside his teammate on row three.

There are few things more dangerous than an animal backed into a corner, and that’s exactly what Rossi is. He’s frustrated and a little bit desperate, so I wouldn’t expect him to hold back now that we’re over halfway through the season. Starting next to Herta on the front row, Rossi’s never been one to shy away from a little contact, and it wouldn’t be a huge shock to see the 2016 Indianapolis 500 winner make the rookie’s life rough as they make the charge down to turn one.

? @ColtonHerta and @AlexanderRossi sure know how to put on a show. The NTT P1 Award came down to the wire ?#INDYCAR // #REVGROUPGP pic.twitter.com/BWii2u1JI2

Aside from his win at Circuit of the Americas, Herta has had a rough year. He looked strong in his Harding-Steinbrenner Racing Honda at Texas two weeks ago, and although his night ended at the Infield Care Center, it was something to build from. The No. 88 machine has shown flashes of speed all year but will be leading the field to the green flag for the first time in his young career. In a position to bring home another solid result–which has seemingly been hard to come by–the scrappy, young team will be looking to right the ship for the closing stages of the season.

It will also be fun to watch Power as he tries to get his first win of the year. Starting on the second row, the Team Penske driver has yet to find victory lane and is seemingly becoming a smaller and smaller part of the title conversation by the week. If he wants to be in the picture when the series arrives at the Monterrey Peninsula in September, he’ll need to take home a trophy sooner or later, or he could be on the outside looking in at WeatherTech Raceway Laguna Seca.

Sunday’s pre-race coverage begins at 12 p.m. ET on NBC, with the green flag expected to drop around 12:45 ET. Live streaming is available on the NBC Sports App with a cable subscription.