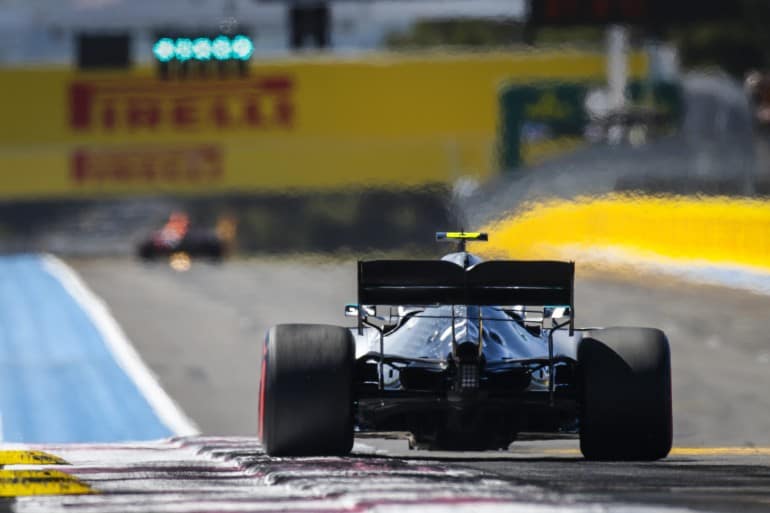 The familiar view for other drivers of Lewis Hamilton (Photo: FIA Images)

In what looked like a stress-free drive, Lewis Hamilton earned his second straight French Grand Prix on Sunday (June 23) at Circuit Paul Ricard. The win was Hamiltonʻs sixth in the last seven races and extended his championship lead over his teammate Valtteri Bottas by 36 points.

Hamilton made a clean getaway at the start, and in some ways, that was the race. Hamiltonʻs drive, even in the high temperatures, looked comfortable, and he never faced a challenge from anyone as he crossed the line 18 seconds ahead of Bottas.

Charles Leclerc held steady from his starting position of third to cross the line in that position and put himself and Ferrari on the podium. He did have a chance on the final laps to possibly push past Bottas but never could find his way around the Finn, who appeared to be having trouble with the balance of his car.

Following Leclerc came Max Verstappen who found himself in another quiet drive that had to be frustrating, as he seemed to slot into his fourth-place starting position and never could provide a fight to those in front of him. Red Bull continues to trail Mercedes and Ferrari, like the rest of the field, but the fact that Verstappen has not lost his mind in his ability to challenge the frontrunners is, at this point, astonishing.

Sebastian Vettel turned out to be one of the few cars that moved up from their starting position, as he made his way from seventh to finish fifth. The result was hardly encouraging, as it dropped him further behind in the standings — opening a gap of 76 points to Hamilton. Vettel was able to secure a bonus point by taking the fastest lap of the race when the team pitted with a few laps to go for soft tyres.

Carlos Sainz earned a solid sixth for McLaren, and Daniel Ricciardo finished in the next spot after battling Lando Norris and passing him with two laps to go. Norris struggled with the hydraulic systems on his car, at times fighting his car all over the track, and looked lucky to be able to even finish — let alone do so in 10th and give McLaren the last remaining points position.

Kimi Raikkonen benefitted from Norrisʻ ailing car and pushed forward to take eighth — tying his best result of the season, which came at the Australian GP. Nico Hulkenberg taking ninth ensured that both Renaults finished in the points and allowed the French manufacturer to save a bit of face in their home race.

One team that seems to be moving backward is Haas F1, who had to retire Romain Grosjean and saw Kevin Magnussen finish in 17th. This result is a far cry from a couple of years ago when the team was fighting for spots in the top 10 and looked to be forming an organization to consistently challenge the mid-pack. Right now, the team looks lost.

From an overall standpoint, the French GP could never be classified as any kind of thriller, as there were few overtakings and little in the way of bold moves. Some races just pass by without much in the way of drama, and this seems to have been one of them.

The drivers get a chance to put on a better show in seven days as there is no off weekend before taking to the Austrian Grand Prix. Perhaps the short track in the winding hills of the Alps will provide a better theater than the flat, visually stunning, but limited Circuit Jean Ricard.