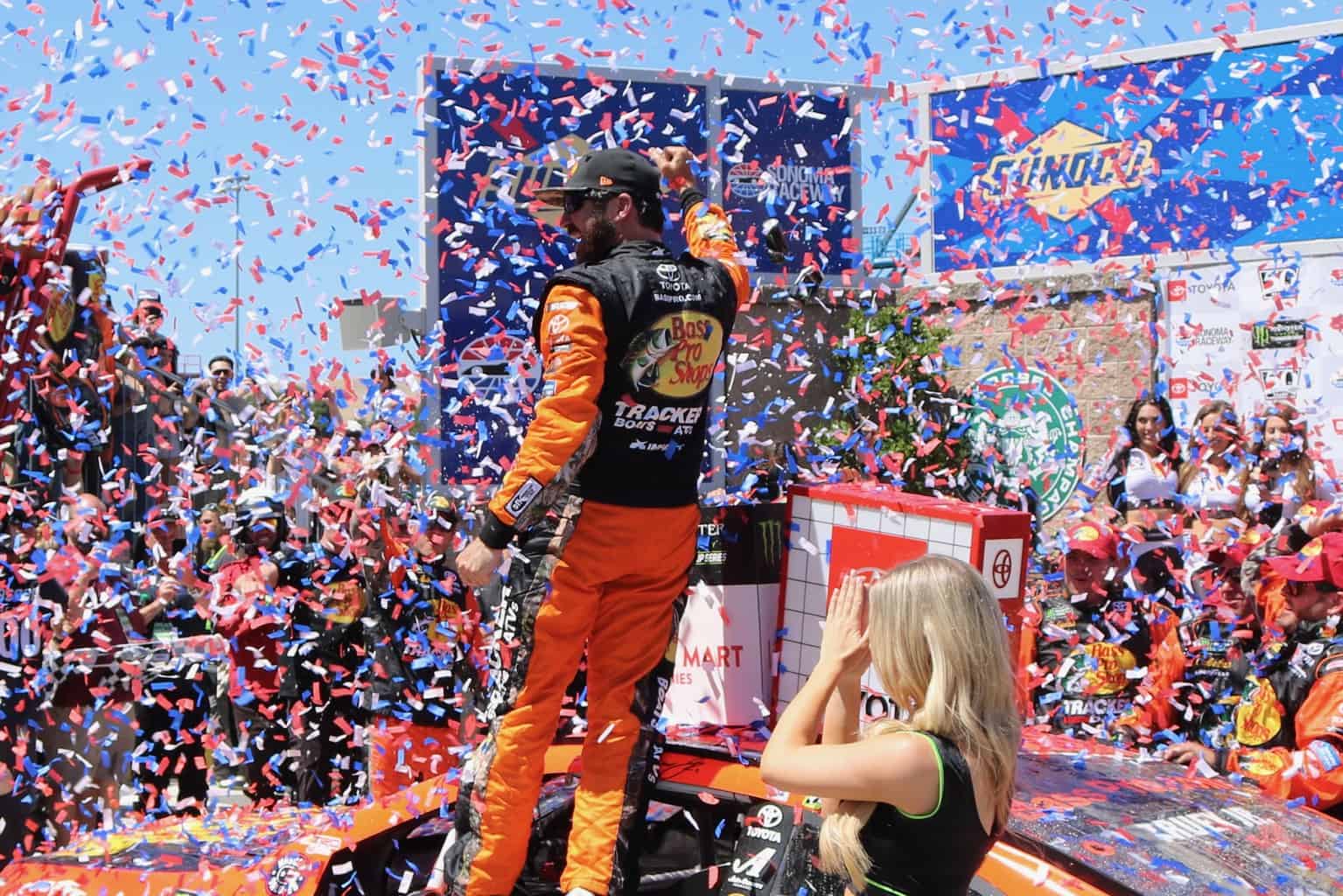 There was no stopping Martin Truex Jr., as once again, it was the Mayetta, N.J. native winning at Sonoma Raceway. Truex dominated the Toyota/Save Mart 350 on Sunday afternoon (June 23), winning his fourth race this season and his second consecutive race in Wine Country.

“Just really proud of all these guys,” Truex said after the race. “Everybody on this Bass Pro Shops Camry, everybody at TRD, everybody back at [Joe Gibbs Racing], all the fans, Auto Owners, everybody who makes this thing possible.”

Truex led 56 of 90 laps and had to fight off a hard-charging Kyle Busch, who kept itching closer and closer after pitting for his final stop on Lap 66.

“I just dug down deep,” Truex said of his battle at the end with his JGR teammate, Busch. “I tried to be smooth, hit my marks. Luckily I was able to have a big enough gap where I could settle in and not feel too much pressure. It was definitely difficult.”

Ryan Blaney finished behind Busch in third, with Matt DiBenedetto scoring his career-best finish in fourth place and Denny Hamlin rounding out the top five.

Kyle Larson started on the pole, but the lead did not last long. William Byron took the lead up the hill and never let up throughout the first stage, gaining 10 points and one playoff point for the stage win. Larson, however, went the opposite way. By the time there were seven laps to go, he was outside the top five.

DiBenedetto, Erik Jones, Chase Elliott and Truex Jr., among others, decided to pit early before the segment ended and gave up stage points in order for better track position for the upcoming two stages.

Hamlin was second at the stage break, with Joey Logano, Larson and Aric Almirola rounding out the top five in stage one.

Logano was told by his crew chief Todd Gordon that they may have an electric issue but he may be alright to make it to the end. Logano survived and ended up 23rd after having to pit late in the race.

After Byron went in during the stage break, Elliott took over the lead, but Truex Jr was having none of it. The 2017 Monster Energy NASCAR Cup Series champion took over the lead and held it until he pitted on Lap 37.

After many of the contenders came down pit road with under five to go, Hamlin elected not to come in during green flag conditions and the two-time Daytona 500 winner picked up one playoff point and 10 stage points with the stage victory.

22 people did not come in during the stage break, and Truex Jr repossessed the lead. This time around, though, he did not let up and led from green to checkered to win his fourth win of the season.

Truex had to hold off Busch, as Truex pitted on Lap 63 and Busch came in three laps later, thus having fresher tires.

Once again, there we no cautions in the final stage, but there was a development in the action, as Elliott reported low oil pressure in the No. 9 as he was coming into his pit stall for one of his final stops of the race.

“We lost oil pressure, so we think a belt broke. We’re not exactly sure why,” Elliott said  “Our NAPA Chevy was good. I hated I gave (Truex Jr.) the lead there. It was just a mistake on my part.”

In the end, though, it was the JGR show as Truex Jr. and Busch finished one-two, with their other JGR teammates Hamlin and Jones finishing in the fifth and eighth positions.

Kevin Harvick finished sixth, followed by Ryan Newman, Jones, Almirola and Larson to round out the top 10.

The Cup Series will be back in action at Chicagoland Speedway next week with coverage starting at 3 p.m./ET on NBCSN.