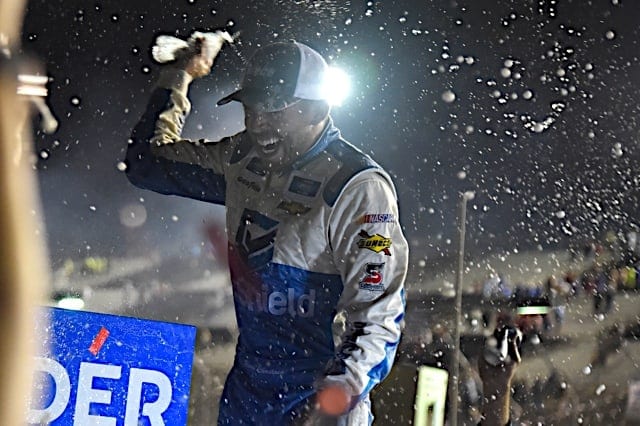 Ross Chastain was a man on a mission at World Wide Technology Raceway at Gateway. One race after he crossed the finish line first, only to have his No. 44 Chevrolet fail post-race inspection, thereby negating his win, Chastain drove his No. 45 Niece Motorsports Chevrolet back into victory lane. Chastain won the CarShield 200.

Unlike his victory at Kansas Speedway and the M&M’s 200 at Iowa Speedway, Chastain didn’t dominate this NASCAR Gander Outdoors Truck Series race. In fact, he didn’t win either stage.

The first caution flag of the CarShield 200 flew at lap 3. Debuting in the Truck Series in the No. 0 Jennifer Jo Cobb Racing Chevrolet, Gregory Rayl made contact with the wall. The damage ended his race.

Grant Enfinger won the first stage. As the first stage ended, Chastain and Matt Crafton battled for position. Racing aggressively, Crafton made contact with Chastain after the flag flew to end the stage.

The second stage was also won by Enfinger, who led flag to flag to score his third stage win this season. He held off teammate Myatt Snider, who drove admirably replacing the suspended Johnny Sauter in the No. 13 ThorSport Racing Ford.

On lap 78, Natalie Decker wrecked, ending her CarShield 200 prematurely. It was her fifth DNF this season. Unfortunately, there was no good TV angle to determine what transpired to cause her to wreck. Her No. 54 DGR-Crosley Toyota smacked the wall hard on the driver side. While she walked away gingerly from the wreck, her team confirmed via text message that she was checked and released from the infield care center.

Took them half the race but the @NASCAR_Trucks woke up… #NASCAR

There was good racing throughout the field, and Christian Eckes took the lead.

With 15 to go in the CarShield 200, Harrison Burton and Sheldon Creed made contact. Burton slid the rear end of his No. 18 Kyle Busch Motorsports Toyota into the wall, receiving significant damage. Burton continued racing, but his finishing position was not indicative of his performance tonight.

During the last green-flag pit stop, Niece Motorsports crew chief Phil Gould opted not to put tires on Chastain’s No. 45 Chevrolet. Chastain looked to be in good shape to win the race, but the Burton caution ended that strategy. Alas, Chastain opted not to pit during the lap 145 caution flag period.

The lap 145 caution flag took a lengthy cleanup despite everyone continuing to race. The final restart took place with seven laps to go. On the restart, Chastain spun his tires, but he received a generous shove from Todd Gilliland. Chastain cleared Eckes, who had two fresher tires than Chastain, and he fended off Eckes’ challenges.

On the final lap, Eckes was passed by Gilliland. Eckes then found himself in front of Stewart Friesen. Friesen made contact with Eckes, and Eckes spun. NASCAR decided not to throw the caution flag, and Eckes lost many positions. When asked about the incident in his post-race interview, Eckes described it as “turned by the 52 again.”

In victory lane, Chastain felt sweet redemption. He said his Niece Motorsports team felt like their win at Iowa Speedway was stolen away from them. Chastain grabbed the briefcase containing the $50,000 Triple Truck Challenge bonus and handed it to someone, claiming NASCAR couldn’t get it back from them. Now that he has a win, all it takes is a move into the top 20 in the point standings to put Chastain into the Truck Series playoffs.

Awesome! Love to see a guy come back like that and do it again. This guy has talent and one of the bigger teams would be wise to pick him up. He showed beyond a shadow of a doubt what he could do in Ganassi’s cars, now if teams would stop using ride buyers like Menard and put real racers like Chastain in their cars things would be a lot more interesting.

Glad for him for sure.

Already tired of the smashing watermelon. Comedian Gallagher made that lame years ago.