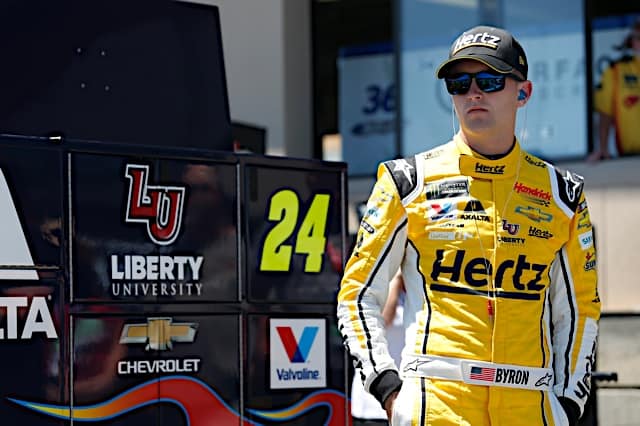 William Byron’s 19th-place result at Sonoma Raceway does not tell the full story of his race.  The No. 24 team experienced an up and down day in the California wine country.

Just like several other races this season, Byron started off very well.  He even looked like one of the drivers to beat.  But in the end, he was barely clinging to a top 20 finish.

During the first stage of the race, the No. 24 team had a good strategy, even if it gave the driver a workout.  Byron started on the outside pole and took the lead from Kyle Larson on lap one.  He managed to hold the lead for the rest of the 20-lap stage, earning 10 stage points and one playoff point he can use towards the postseason if he qualifies.

Heading into Sunday’s race, Byron’s playoff status was still very much a matter of “if.”  He stood 22 points above the playoff cut line in 14th overall.  That put him in a tight battle with drivers like Larson, Jimmie Johnson, Ryan Newman and Erik Jones for the last few playoff spots.  It’s not an enviable position for Byron to be in as the season progresses, especially with veterans, like Johnson and Newman, so close behind him.

Additionally, the No. 24 team has struggled to close races this season.  Byron has been able to qualify very well this year, earning four front row starts in the last six events.  But it has become all too common to see the North Carolina native lead laps early, drift backward, and never mount a serious charge for the win late in the race.

Now, 52 starts into his Cup Series career, Byron has yet to earn a top five finish.

Sonoma looked like it could be different, at least for a little while.  After pitting under the stage one caution, Byron restarted deep in the field but did an admirable job working his way through traffic.  Sunday’s race was yet another Cup Series event in 2019 where passing proved to be difficult.  Yet Byron methodically worked his way back to the top 10.  When several drivers in front of him went to pit road before the stage ending, he stayed on track again and finished stage two in third.

This strategy appeared to set Byron up well for the rest of the race.  He had already banked a combined total of 18 stage points.  Larson had 12, but Johnson had only scored one, while Newman and Jones did not have any.

Not only did Byron have a leg up on his competitors points-wise, he had demonstrated the ability to drive through the field as well as almost anyone.  Sonoma looked like it could be a pivotal race in Byron’s quest to make the playoff field.

Then in the third stage, it all fell apart.  After restarting deep in the field once more, Byron tried working his way forward again, but the No. 24 did not seem to agree with the long green flag run to the finish.  Byron also made his last pit stop a bit earlier than some of his competitors, hoping to be among the first to take advantage of fresh tires.  That move turned out to be a short term gain but long term loss.  With no other cautions to provide additional opportunities to pit, the No. 24 team lost the handing on the car.  Any chance Byron had of winning his first race was gone.

Of course, nobody else had anything for Martin Truex Jr. or Kyle Busch, but Byron’s closest competitors in the playoff race were able to finish better than him.  Newman was quiet throughout the first half of the race worked his way into the top 10 during the final stage, ultimately finishing seventh.  Jones drove all the way from the back of the pack to finish eighth.  Larson and Johnson were among a group of drivers who found themselves fighting for the last few top 10 spots late in the race.  Larson prevailed with a 10th place finish while Johnson slipped to 12th.

Instead of getting a boost toward securing a playoff position, Byron’s stage points wound up being the only thing that saved him from a highly disappointing day.  He ended Sunday’s race still 14th in points, 29 above the cutoff, giving him a net gain of seven for the weekend.  That may be a better position than he was a week ago, but it is safe to say the No. 24 team left some points on the table.

Compare that to Newman, who looked average for most of the week but finished higher than where he ran.  In fact, Newman took over the last playoff spot from Johnson by a single point.  Considering how the No. 6 team was not on anyone’s radar this weekend, Sonoma may wind up being more of a positive for Newman’s playoff hopes than anyone else.

The experiences of the playoff bubble drivers, especially Byron and Newman, reflect the difficult choices that teams must make when approaching stage racing.  The No. 24 team used its strong starting position to rack up stage points early and worry about the end of the race later.  Meanwhile, Newman and the No. 6 team took all race to get their car competitive and missed out on stage points while aiming for the best finish possible.  Byron’s strategy netted him more points in the end (36 to Newman’s 30).  Yet Newman took a worse car to a better finish, and those are the kinds of performances that can go a long way to determining a team’s playoff fate.

No matter what happens with the postseason, the habit of starting strong but fading at the finish is a problem that the No. 24 team will have to address.  Sonoma was a step in the right direction for Byron, but it ultimately did not provide the answer for how the second-year driver can be at his best when the race ends.

Certainly Byron, crew chief Chad Knaus, and the Hendrick Motorsports brain trust have time to fix the No. 24’s issues and secure a playoff spot, but the clock is ticking.  A few more late-race fades could easily leave Byron on the outside looking in.