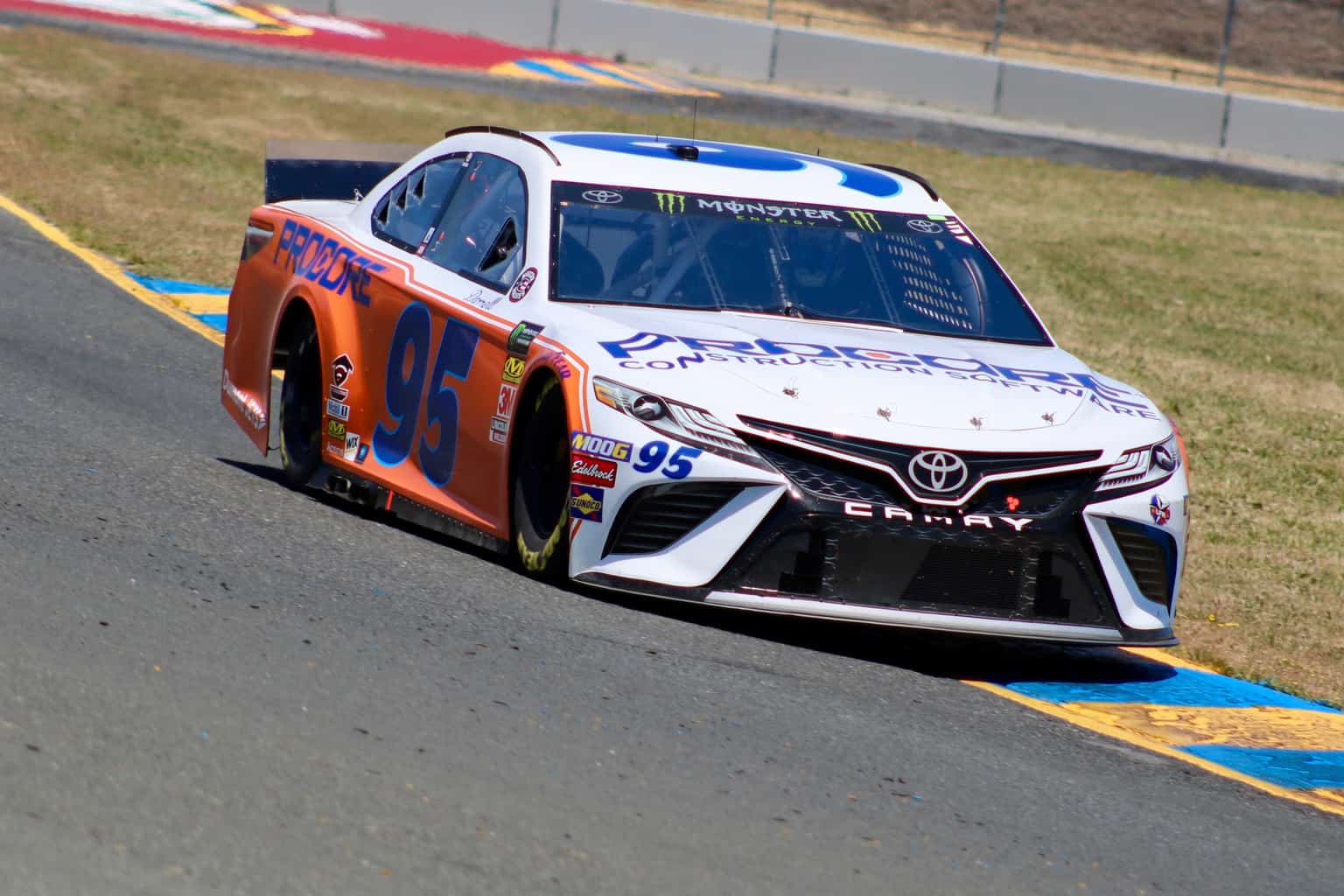 Matt DiBenedetto may not be a name that comes to mind when you think of talented road racers, but the 27-year-old from Grass Valley, CA is doing his best to change that. DiBenedetto earned his first career top-five finish at Sonoma Raceway on Sunday (June 23), coming home in the fourth position in the Toyota Save Mart 350.

It wasn’t just that DiBenedetto finished fourth but rather how he got there. The No. 95 Leavine Family Racing driver wheeled his Toyota through the field, running strong throughout the entirety of the race. As the laps wound down, he ran down and passed former Sonoma winner Kevin Harvick for position from eight seconds back in the final laps.

After the race, DiBenedetto expressed his gratitude for all of the people who helped him reach a point in his career where he could have an opportunity to be that competitive.

“This is a team effort,” DiBenedetto said. “I am just so lucky to be doing this. I know I say it every time I get interviewed, but my path to get here has been so out of the ordinary and old school, and I’m so thankful.

“I can’t tell you how many people took a chance on me to let me have this opportunity. My sponsor Procore, TRD, Joe Gibbs Racing, Dumont Jets, Bob, Sharon Leavine and Michael. My crew chief Wheels (Mike Wheeler). He was crew chief for Denny [Hamlin] for the past few years. All those people had to say yes and approve me getting in this car and take the chance on me. I don’t know how to explain how thankful I am. It was so much fun.”

Behind DiBenedetto, there were a pair of other underdogs in the top 20. Chris Buescher continued his solid 2019 campaign with a 16th-place finish. David Ragan claimed the final such position, coming across the line in 20th place.

As for the NASCAR Gander Outdoors Truck Series, this week was the ultimate rebound for underdog fan favorite Ross Chastain. Chastain appeared to have his second win of 2019 last week at Iowa Speedway, but the truck was deemed too low in post-race inspection, and the Niece Motorsports No. 44 was disqualified. Chastain would need to win again if he had any hope of being playoff eligible.

So he went out at World Wide Technology Raceway at Gateway on Saturday night and did exactly that. Chastain took advantage of a late run-in between Stewart Friesen and Christian Eckes to score his second official victory in 2019. Now the Alva, FL native only needs to finish the regular season inside the top 20 in points to earn a playoff berth.

Other notable names in the top half of the field at Gateway were Chastain’s teammate Kyle Benjamin in 13th and Tyler Dippel in 15th. For Dippel, it was his fifth top-15 appearance in the 11 races thus far in 2019 with his Young’s Motorsports team.

Jordan Anderson is likely one of those most recognizable underdogs in the Truck Series, or any series for that matter. Sure, he’s a friendly guy and a hard working racer, but it was an innovative marketing campaign that landed Anderson in the national spotlight.

Anderson got his start working on his own cars at his family shop in his hometown of Columbia, SC. As a teen, he raced Legend cars and late models. It was instilled in him from the beginning that if he wanted to race, he would have to be willing to put in the work to get the car ready to hit the track.

For 2016, Anderson had signed on to race for Bolen Motorsports, and did so with a reasonable amount of success. Finishes such as an 11th at Gateway and 14th at both Pocono Raceway and Michigan International Speedway had things looking good for the No. 66 team. Then the team blew an engine at Chicagoland Speedway. Since it was the same motor they needed for the next week at New Hampshire Motor Speedway, Anderson lamented on his Twitter account that the team would likely not be able to go to Loudon.

Then, in a remarkable effort, Anderson launched a crowdfunding campaign to raise money to get a motor. It was a success, and to show his appreciation, Anderson hand wrote each donor’s name on the decklid of his truck with a sharpie.

One of the most amazing experiences I've ever had a chance to be a part of. The support you all have shown is incredible. We made it! @NHMS pic.twitter.com/FFCeua9u7M

While the team finished 22nd, it gained Anderson a great deal of attention from media and other competitors while showcasing the loyalty of his growing fan base.

After losing his ride with Bolen, and a difficult 2017 that saw him drive for three different teams, Anderson announced he would form his own team in 2018. Right out of the gate, Anderson finished ninth at Daytona despite crossing the finish line spinning through the infield grass.

For 2019, Anderson is still fielding his own trucks but now works out of the Niece Motorsports shop and no longer has to drive a pickup truck across the country pulling a gooseneck trailer with his race truck inside. But there’s little doubt that the blue collar racer would be willing to do it again should ever the need arise.

There’s nothing like your first career top-5 feeling, especially when you grew up just up the road from @racesonoma! Great finish today for @mattdracing and his No.95 @procoretech #ThanksDW Throwback Toyota Camry.
Fourth-place definitely feels like a win today!#poweredbyProcore pic.twitter.com/ZiuCevRcgE

Rough day in the office. Got spun, spun again, spun a friend and never could catch a break. We had a decent @LovesTravelStop Ford but it was not meant to be today. Up next @ChicagolndSpdwy

Just saw the results at Sonoma. So pumped and beyond happy for my friend @mattdracing for finishing 4th and more importantly for @TayDiBenedetto since she has to deal with him. Hopefully Matt and @LFR95 can build from here.