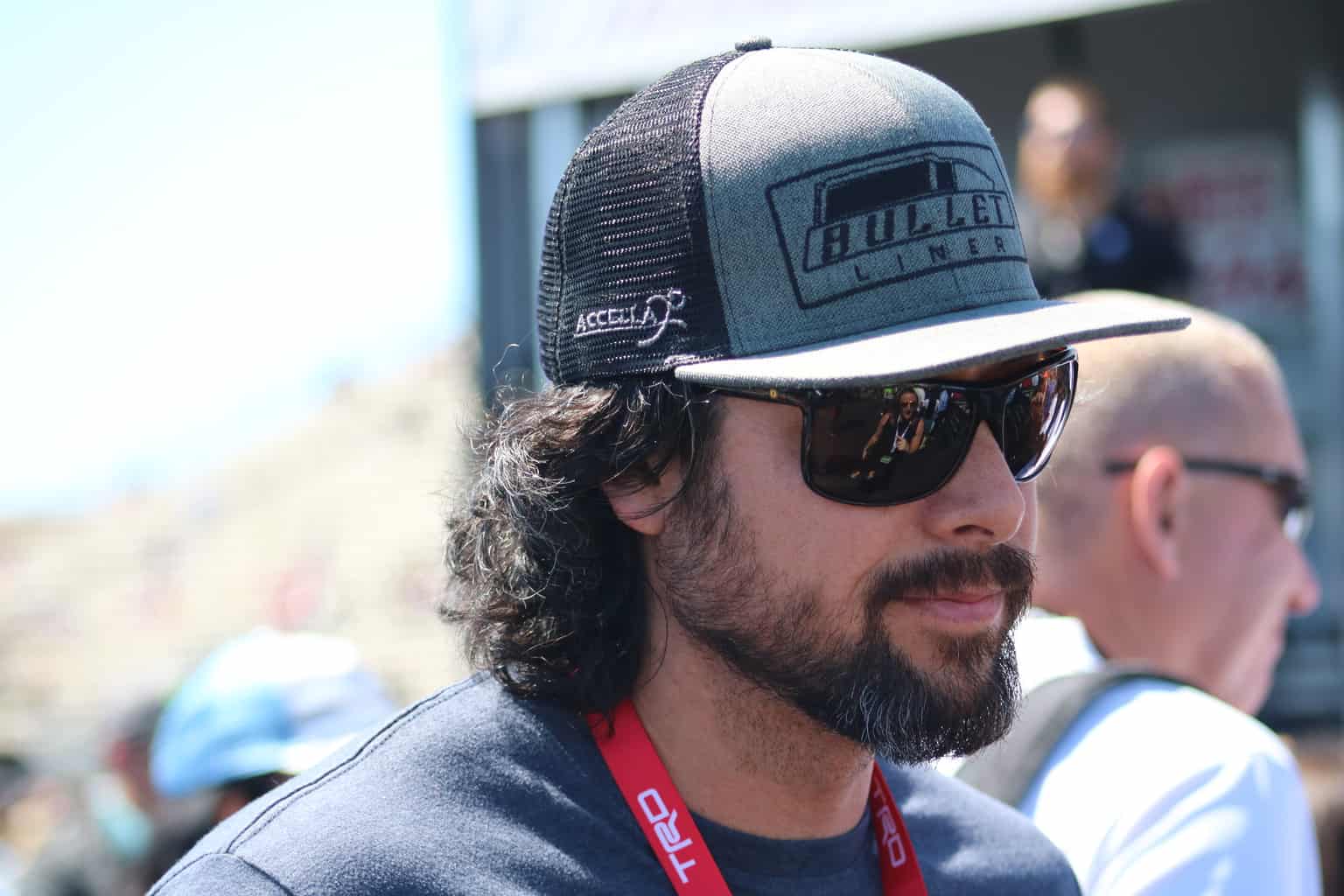 To many people, race car drivers are heroes, and it’s a thought echoed in the famous old Ernest Hemingway quote: “There are only three sports: bullfighting, motor racing, and mountaineering; all the rest are merely games.” And yes, on some levels, what drivers do could be considered heroic. Only a minute few of us, a mere fraction, can slip on a helmet, pull those belts down tight, crank up a roaring race car engine and race at the ragged edge of the tires against opponents who will do everything they can to beat you.

But then there are true heroes like Allyn Pierce, a nurse in an intensive care unit at a hospital in Paradise, California who risked his life to help save patients during the early stages of the devastating Camp Fire. All told, 85 souls lost their lives while the fire destroyed 19,000 structures and over 150,000 acres.

On the Saturday of race weekend, I got a chance to look around his charred Toyota which was on display in the fan zone behind the main stand at Sonoma Raceway, and it really is quite something. Then on Sunday, behind the stage prior to driver introductions, I had a minute to chat to Allyn and to thank him for his heroics. He is as humble as he was brave on that terrible day, and a touch overwhelmed by all the attention he was receiving as an honored guest. He deflected almost immediately to all the other heroes of the fires when I thanked him. And it’s that quality that highlights just exactly why Allyn Pierce is a true hero — a symbol of hope amidst the wanton destruction wreaked by the fire.

You can read a more in-depth profile of Allyn here:
https://www.washingtonpost.com/lifestyle/2018/11/14/when-hell-moved-california-nurse-drove-through-fire-save-lives/?utm_term=.c52ce6f9b86d

It took nine races for Martin Truex Jr. to pick up “W” number one for his new team, Joe Gibbs Racing. Since then, he’s been on quite the tear, winning four of the last eight at Richmond Raceway, Dover International Speedway, Charlotte Motor Speedway, and now Sonoma Raceway for the second straight year and third time in his career (2013 being the first win). And it’s interesting to note that the four tracks he’s won at vary wildly in size and banking: a flat three-quarter-mile short track, a concrete one-miler, a more traditional mile and a half cookie cutter, and now the 2.52-mile road course victory in Northern California’s wine country. All told, JGR has won 10 of the 16 races this season, an incredible clip even by their lofty standards, with Kyle Busch (four wins) and Denny Hamlin (two wins) adding to Truex’s quartet of victories. But as we’ve seen in years past, statistical dominance during the regular season is an indicator, not a guarantee, of playoff success. “Just really proud of all these guys,” Truex said in victory lane. “Everybody on this Bass Pro Shops Camry, everybody at TRD, everybody back at JGR, all the fans, Auto Owners, everybody who makes this thing possible. What a season we turned this into.” With 20 races still to run in 2019, and given his stellar form, it’s fair to expect several more trips to victory lane this season for the 2017 MENCS champion. And who knows? Maybe a second championship.

With 16 races in the books and the halfway point of the 2019 Monster Energy Cup Series almost upon us, it’s time to give a warm welcome back to NBC, who will pick up broadcasting duties through the conclusion of the season and the crowning of the 2019 MENCS champion. It’s always something of a moment of transition in the stock car season as we move from one gigantic network to the other with each broadcaster bringing different methods, styles, techniques and, naturally, personnel. NBC’s approach has always felt a little less bombastic to me than WE ARE FOX SPORTS (deliberate caps), but it’s not to say one broadcast style is better than the other — it’s just different and the choice is yours. This will mark the fifth year of the monster 10-year deal signed by both networks that began in 2015, and you can’t help but wonder what exactly the Cup Series will look like when the deal concludes in 2024. I was going to type November before 2024, but who knows whether that will still be the case in half a decade?

Next up, we head to Chicagoland Speedway in Joliet, Illinois, for our one and only visit of the season. The one-and-a-half-mile tri-oval has played host to 18 top echelon races – a streak that runs all the way back to 2001 and a race won by Kevin Harvick. This was the second win of Harvick’s then nascent 17-race Cup career. He’s had 43 more wins and counting — just for the record. Harvick won again in 2002 as well but hasn’t returned to victory lane at Chicagoland since. Kyle Busch, Brad Keselowski and Truex each have a pair of wins, while Ryan Newman and Hamlin have one win apiece. Harvick also has the most top fives (10) and the most top 10s (11), tied with Jimmie Johnson. And speaking of old seven time, this is a rare track he hasn’t won at. Boy, could he do with a morale boosting victory this weekend.

Eight races into the 21-race Formula One schedule and Lewis Hamilton has won six of them. His Mercedes teammate Valtteri Bottas has won the other two, giving the manufacturer an absolute dream of a start to the season. This past Sunday, in the French Grand Prix at the Circuit Paul Ricard, the five-time champion led from flag to flag. Four-time champion Sebastian Vettel is already 76 points in arrears. Given 26 is the maximum number of points available in any given race (25 points for P1, and for the first time in 2019, one point for the fastest lap of the race) his hole is staggeringly deep already, and unless something changes dramatically, Ferrari clearly do not have a car that can mount a sustained challenge for the championship. The most wins Hamilton has picked up in a season is 11 in 19 races in 2014, and in 21 races last year. Back when Vettel secured his fourth straight, and final to date, title in 2013, he won the final nine races for a total of 13 on the year. At the rate Hamilton is notching the checkered flags in 2019, he might just top that this year.